My friend Brooke Thackray, Research Analyst for the Horizons Seasonal ETF, (HAC-TSX) writes a monthly update, much like we at ValueTrend do. For those interested in receiving Brooke’s newsletter, click here to subscribe. For those who wish to subscribe to the ValueTrend newsletter, click here. I am not trying to be  promotional for either newsletter – but I do feel that those interested in technical analysis might benefit if they subscribe to both of these free and information-orientated publications.

On Brooke’s most recent edition, he notes:

“Saying that the stock market looks forward by six or nine months is a nebulous concept. It is often used as an excuse to justify the valuation of the stock market on a qualitative basis. Sometimes it is important to parse out the elements to try and grasp if investors are being too optimistic or pessimistic in their judgement of the future….

Investors initially stepped into the stock market in late March because it was an opportunistic low. Many believed that they were taking advantage of once in a “lifetime deals,” and the Federal Reserve would make sure that they did not get hurt. If that were true, it is no longer true given the markets rapid rise since March 23rd. Now, we are at a reality check time. Companies that were in good shape two months ago are starting to seek bankruptcy protection. The are a large number of businesses that are going to be ﬁghting to stay alive, despite central bank and government assistance….

It is a real stretch to say that in nine months (the time typically quoted for the stock to look forward to economic conditions) that the US unemployment rate will return to 3.5% and GDP will be back to its previous levels.”

I do feel that the market is ahead of itself, and we may go through a consolidation or up/down traders market for a while. But that’s just my opinion. Today, I’d like to take a look at other investors opinions.

Below, I have posted some charts that come from my collection of “go-to” sentiment indicators. Essentially, we are trying to read if sentiment by various groups is too bullish at this time.

Lets start with a compilation of surveys that Sentimentrader.com has put together called the “AIM” model. This indicator tracks the surveys and outlooks of investment advisors, advisory services & newsletters, and individual investors.  As you will note below, this compilation suggested too much optimism prior to the COVID crash. The current level suggests that surveyed groups went from too optimistic (bearish) to too pessimistic (which is bullish) in March. The indicator has moved  to the current level of slightly pessimistic, but not at panic lows. Its telling us that advisors and investors are cautiously becoming more optimistic which is a bullish to neutral signal from a sentiment point of view. 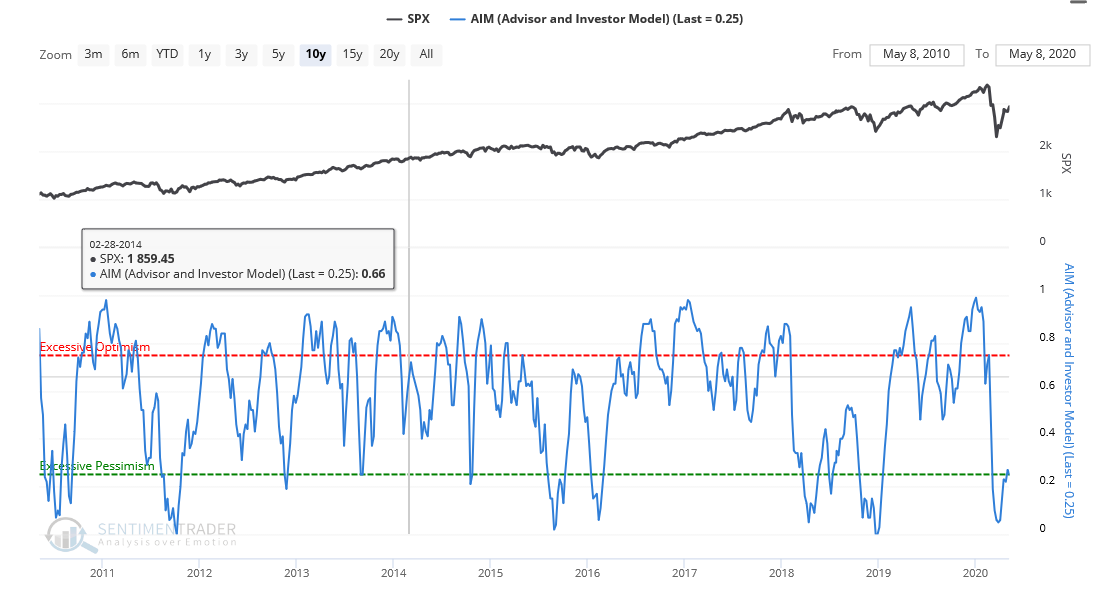 When investors get scared, the put/call ratio changes from a normally biased towards the “Call-buying” bullish viewpoint to a “put buying” fear trade. The chart below shows us the fear-trade (buy signal) in March. It gives us a neutral signal now.

The VIX (Volatility index) basically measures option premiums. Big premiums mean option writers are demanding more money if you wish to buy an obligation to buy or sell a stock (or index) at a set price over a set period. Clearly, a volatile market implies prices could change aggressively over the time period of the option that the writer is undertaking. So he/she wants more money for that risk. This higher premium is seen in the VIX. The greater the VIX, the greater the perceived risk or volatility that option writers perceive. My research suggests a VIX level of 12.5 or below is complacent (high risk market) and above 32.5 is fearful (low risk market). The chart below shows us that option writers still demand a fairly high premium for their perceived risk, with the recent move to 36 suggesting risk is lower than normal, but buying conditions are not quite as attractive as it was in March. 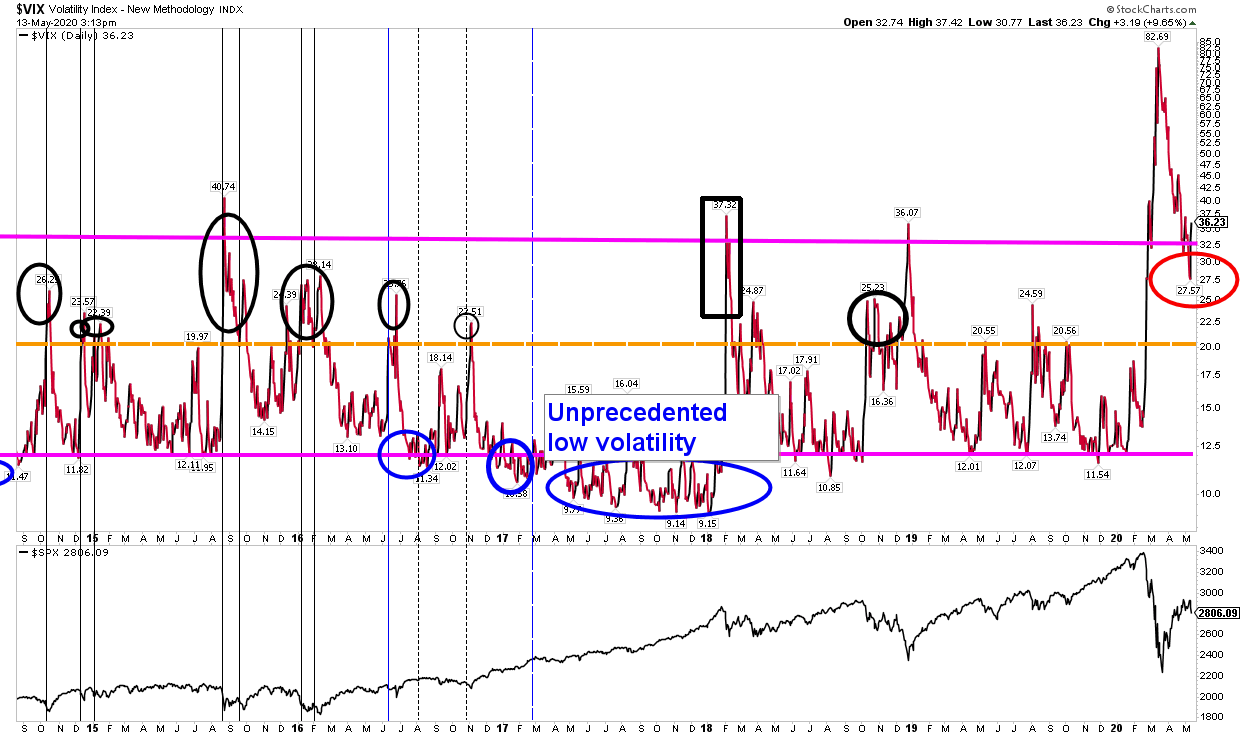 I love the smart/dumb money indicator. Firstly, when I talk about it on BNN, people sometimes send me hate-mail. I get a kick out of that in some weird way. You see, the smart/dumb indicator pits “smart money” (institutional money like pension managers etc, commercial hedgers, and pro traders) against “dumb money” (retail investors, mutual fund buyers). Hey, wait a minute–did I just say that ordinary investors are dumb? Yes!  I know…Them’s fightin’ words! Hence the hate mail.

Nonetheless, it is a fact that retail investors and institutional money tend to operate quite dis-similarly near key inflection points of the markets. That is, retail money tends to panic at the bottom while smart money starts buying. Thereafter, retail money buys aggressively at the top while smart money starts selling. The truth hurts, and I guess “haters gonna hate” (hence the emails I sometimes get when I talk about this phenomenon).

The chart below illustrates the rather phenomenal track record of the smart/dumb confidence relationship. Smart money is the blue line, dumb money is red. At extremes (horizontal lines) you can see how these two groups pick tops and bottoms with amazing negative correlation. If the red line is high (above the top line) and blue line is low (below the bottom line) you have an overbought market–that almost always declines within a short time frame. That happened in the early part of the year. But the recent market moves have not yet signaled an aggressive buying signal by the smart (blue) line, despite the buying signal provided by the capitulating retain investor (red line). Currently its neutral with an edge towards bullishness, insofar as this indicator goes. 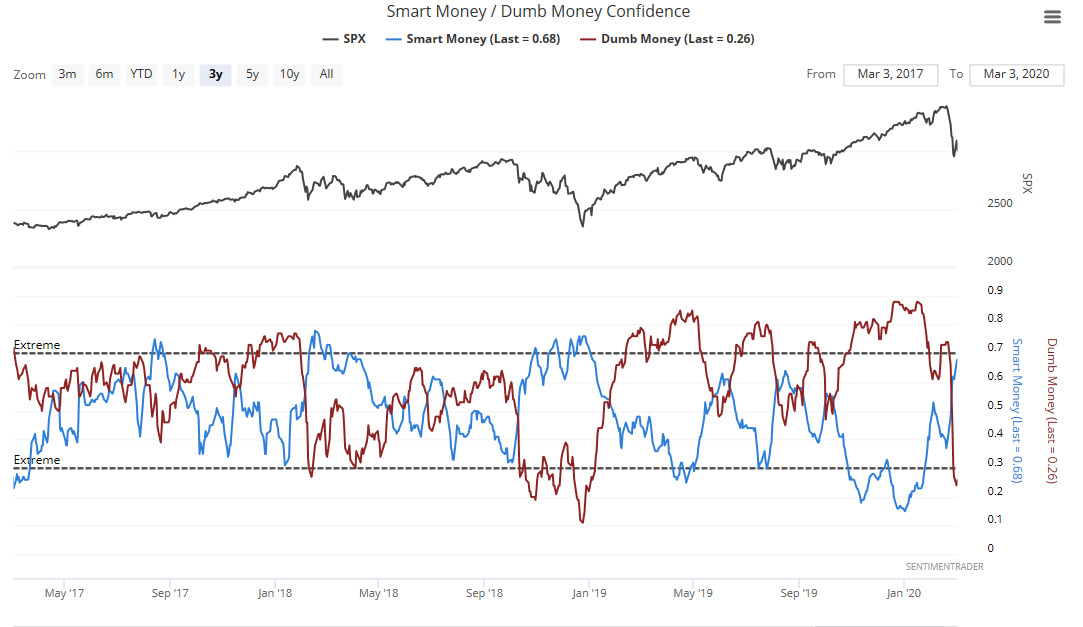 Sentimentrader combined the Citigroup Macro Risk Index, Westpac Risk Aversion Index and UBS G10 Carry Risk Index Plus. Its name is the Risk appetite index, – a self explanatory title. Again, we have an index showing that risk appetite has moved from bullishly bearish (ha!) to neutral.  You can see why I like it. Generally, the extreme points on this index point to corrective periods – to the upside or downside, depending on which horizontal line the indicator breaches. The recent selloff suggested an aversion to risk (bullish–lower horizontal zone) after an unusually long period of time with a high appetite to risk over the 6+ month period leading into February. Its neutral right now. 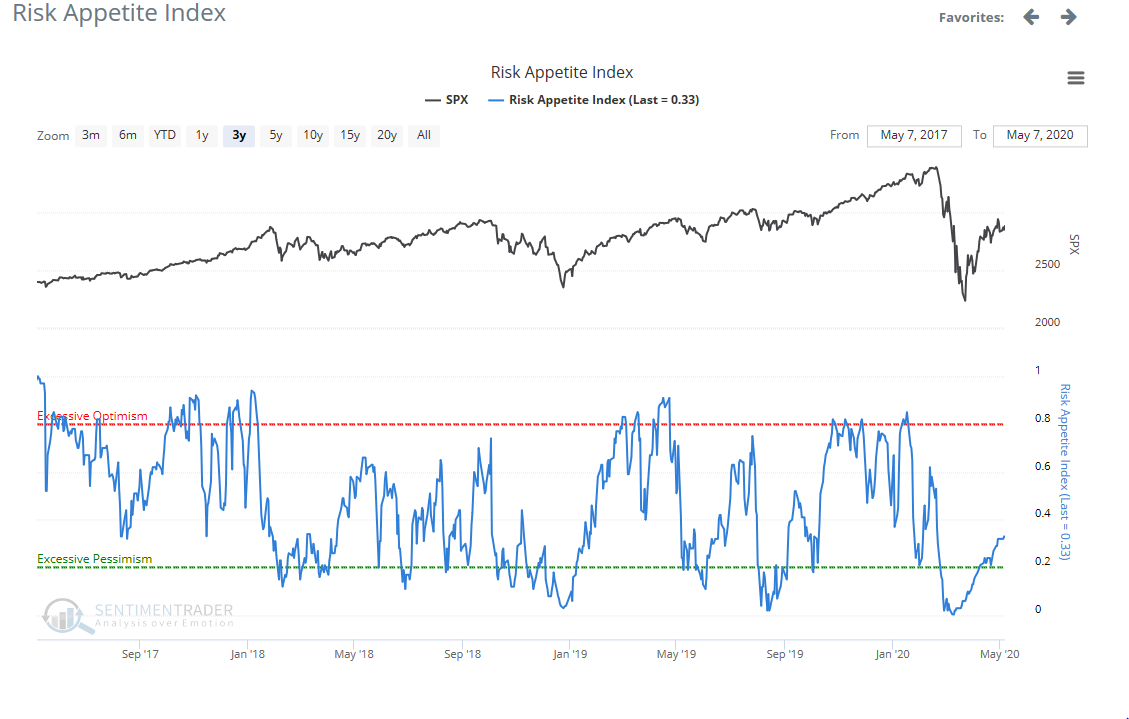 I’ve made no secret of ValueTrend’s strategy of late. That is, we sold some stocks in the second half of April. We are about 36% cash in the Equity Platform right now. The sentiment work above suggests that markets are not suffering from an overconfidence problem. That’s a good thing. But the market remains below its 200 day SMA, which suggests that the broad trend itself remains bearish. So, we hold some cash, and have shuffled our remaining stocks around to represent companies with

All of these positions exhibit good technical risk/reward profiles.

We are looking for an entry point at either 2750 or 2650 (roughly) on the SPX as a trade with a portion of our cash … or for a move over the 200 day SMA as a longer termed bull-trend signal. My view (fool that I may be) suggests that the lows of March 23rd near 2200 will not be breached. Markets could move sideways over the summer. That might imply many up/down trading swings. An environment I actually quite like. Or, it could go through that 200 day SMA and resume the old bull market trend.

For now the question is:  Trade, vs. Trend? Time will tell.