Home / Gold vs. USD: Who will blink first?

Gold vs. USD: Who will blink first? 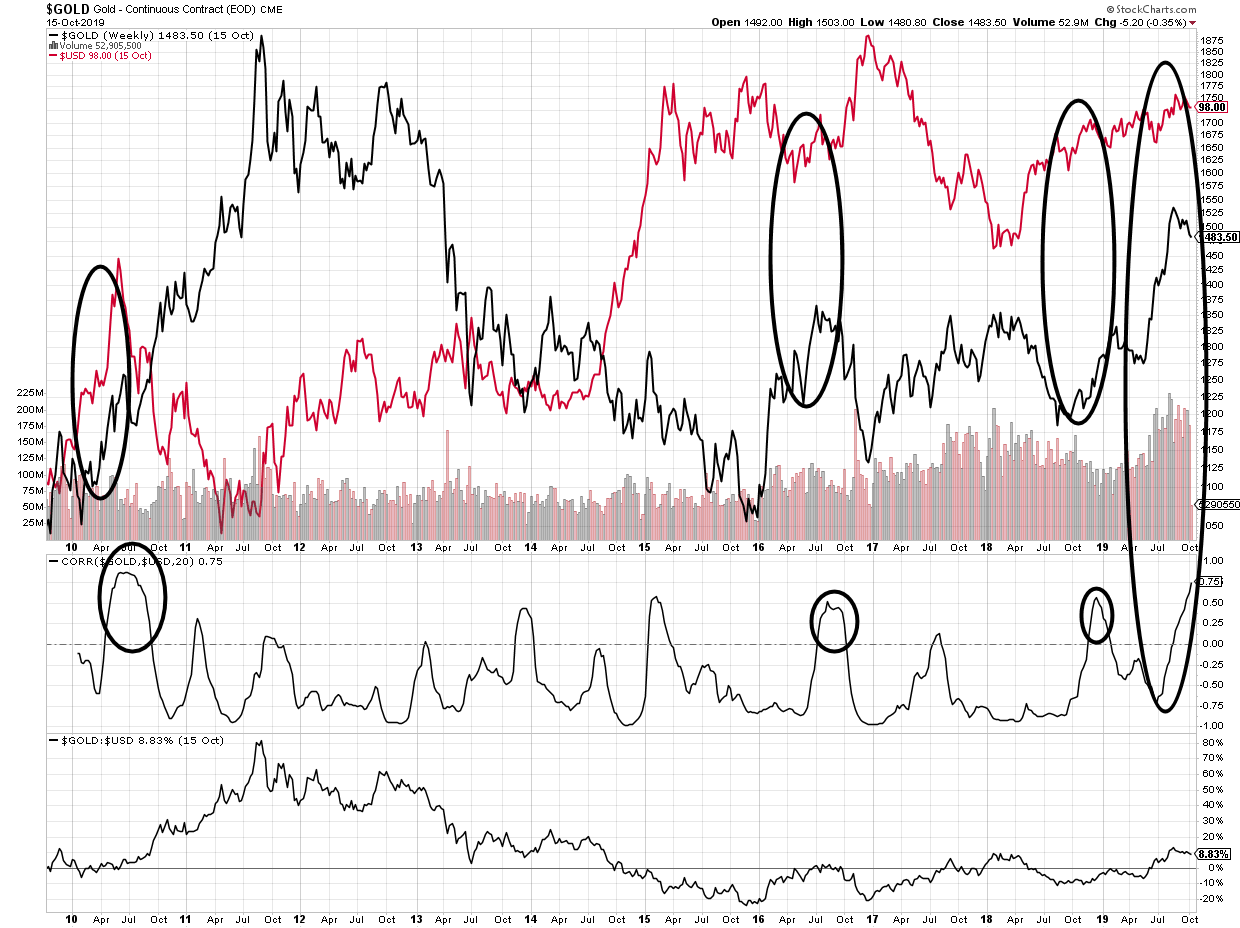 Todays chart compares gold and the USD. The black line is gold, and the USD is red. Upon a quick glance of the chart, you can easily see that most of the time, gold and the greenback move in opposite directions. That tendency makes gold a hedge against a falling dollar. On occasion, the two move in tandem. That doesn’t last too long. Such periods are likely leading into an aggressive about-face for the direction of the two charts.

The bottom pane of our main chart is a correlation study. Basically, a correlation line shows us how correlated the movement of these two charts are in movement. You’ll note that for the vast majority of time, the correlation line is below “zero”. When its below zero, its a negative correlation. That makes sense. When the dollar zigs, gold zags most of the time. You will see brief moments where the correlation line moved over the zero line. The closer to 1.0, the more closely the two are moving in tandem with each other. These periods, as I said, dont last long – as illustrated by the brief hooks above zero before reversing.

The longest lasting positive correlation between gold and the dollar can be seen on the left side of the chart in 2010. The two moved in tandem for several months. Take a look at the right side of the chart. Note how the current period is showing the highest positive correlation between gold and the USD since 2010. They’ve both been bullish for many months. History suggests that this wont last long. Either the USD , or the price of gold will move out of sync with the other. The correlation line doesn’t stay above zero for any meaningful period of time.

Lets look at the charts of gold and the USD to see which will give (go down).

Here’s the weekly chart of the USD. You can see that its been in a pretty tight bullish trend channel since 2018, and a general uptrend since 2017. It recently hit the top of the channel. Will it pull back to the lower part of the channel? Probably! That’s about 96.50 to 97. Its already sunk from 99.50. So we’re half way there. To me, that’s not a ton of downside – so long as the trend chanel remain.

Here is the weekly gold chart. In this chart, I added the momentum studies to point out the rounding over from overbought levels. Downside is to the black horizontal line which represents the breakout point. Like the USD – its a pullback within a bullish pattern. Downside for gold is probably to near $1400. I’d be a buyer around there. If it holds. 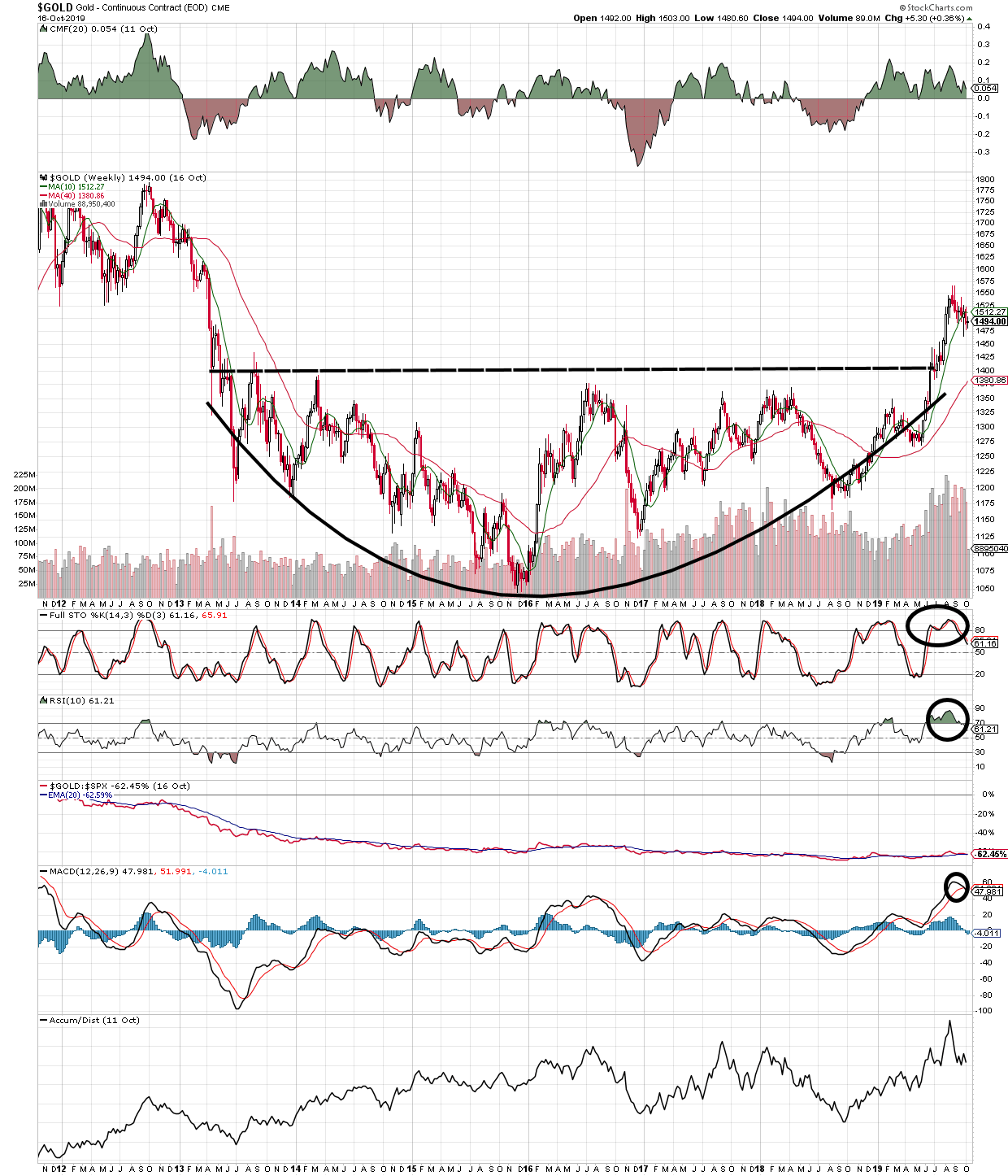 Our top chart suggests that the positive correlation between gold and the USD that occured in  recent months should come to an end very soon. At this time they are still rather correlated. Now both are moving down from overbought levels. So long as they move in the same direction, be it up or down, they remain positively correlated. And that, as you know from the top correlation chart, won’t likely last.

My question remains: which will give? Will the USD break its uptrend and start a bear trend? Will gold hit $1400, and fail at that level of support (former resistance)? I honestly cannot provide guidance here. For now, the best thing to do is watch them both and see who blinks first. IF gold bounces positively off of $1400 (ish), its likely best to buy gold, sell USD’s. IF the USD bounces off of the bottom of its trend channel at or around $98 – its probably best to hold USD’s, sell your gold. Your guess is as good as mine as to which will occur. My only conviction is that somebody’s gonna blink.