A few weeks ago I suggested that both the CDN $ and long-bonds may be oversold, and ready for a bounce. Here’s the link: www.smartbounce.ca/?p=2325

The Canadian dollar has bounced- due to the softer USD of late. It’s up to 0.97 from the 0.94 point in my blog. Very short term momentum studies such as stochastics suggest an overbought condition on the daily chart, but longer termed indicators such as MACD (not shown) and RSI are not overbought. Further, RSI is diverging somewhat by illustrating a higher high. While not enough to get too excited about, it may imply that there could be a bit more upside yet for the CDN dollar. Note that the bigger picture is still bearish—the trend is still down at this time. It needs to break above 0.98 to break that trend. Thus, the recent strength in the loonie (or weakness on the USD, whichever way you like to look at it) is likely temporary. 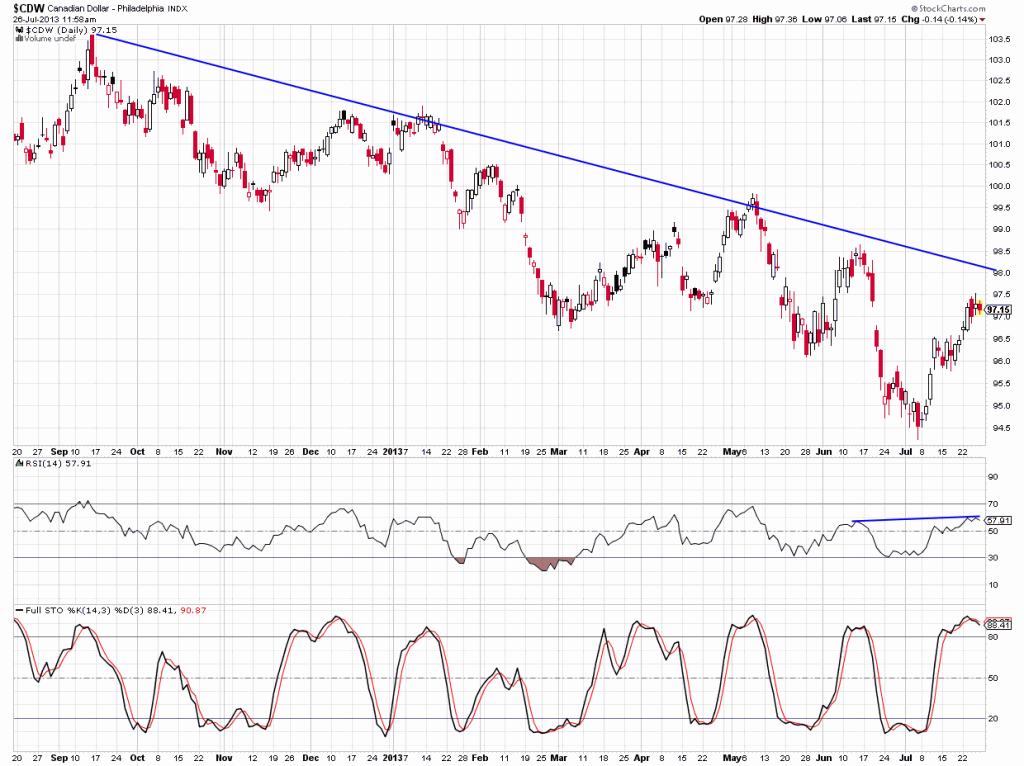 The bond market tried to move up, but failed. TLT moved from $107-ish at the time of writing the last blog to almost $111, then back again to $107. Obviously, there is support at current levels for US bonds, but no movement yet. Same for the Canadian long bond (XLB-T). Momentum indicators are diverging  – with price moving down while they move up in recent weeks. Interesting… this may lead into a renewed run at a rally for bonds. Some of the “experts” in the bond world such as Bill Gross of PIMCO and Canada’s Fierra Capital see a potential for a bond market rally into September. Having said this, I remain in largely short duration paper for the bond portfolios I manage. 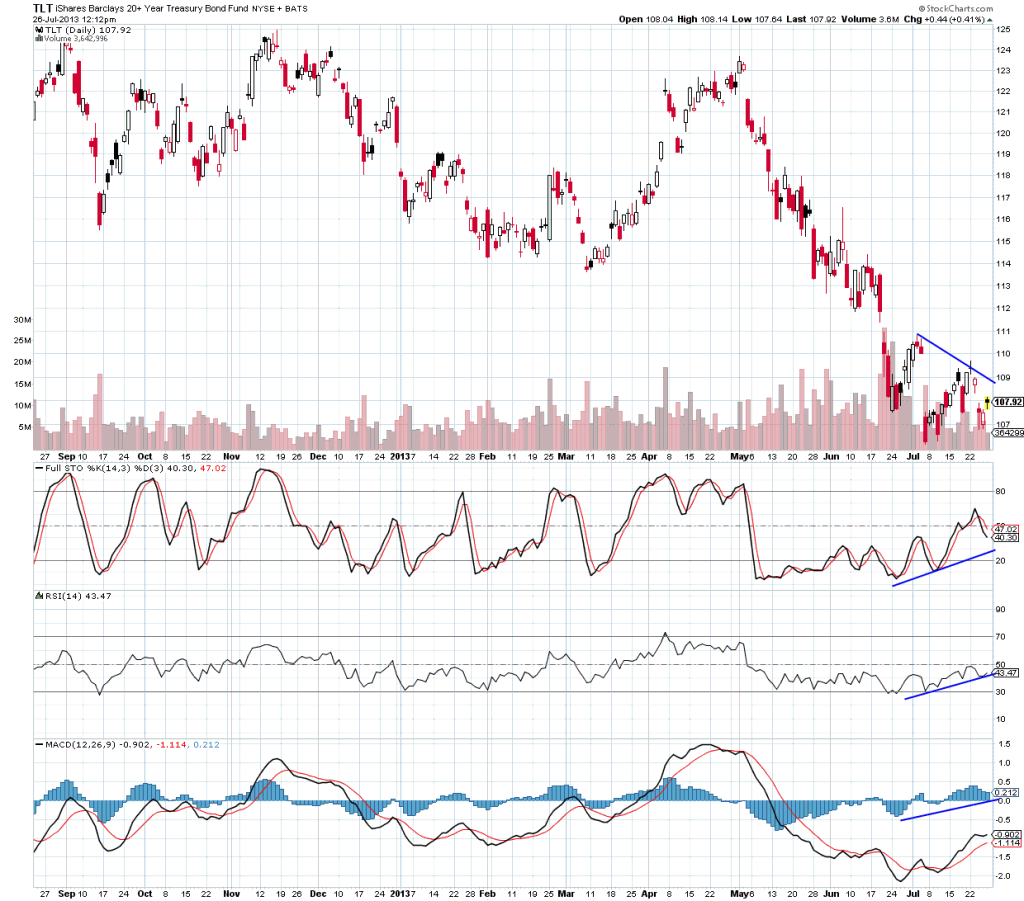 Oil has been making the headlines recently as well. A strong move out of its triangle, as discussed back in May on this blog (https://www.valuetrend.ca/?p=2165) would suggest further upside. WTI is now at a former resistance point as it nears $110. It may crack that level, but that remains to be seen. Traders might want to consider riding stop loss orders or taking profits here. I don’t hold any oil at this time.

Gold is struggling to put in a bottom. Unlike the bullish breakout for oil, it needs to break at least $1375 before the formation could be considered mildly bullish. Its not aggressively overbought on the daily charts right now, beyond stochastics (which is a very short termed momentum indicator). Gold remains below its key moving averages—although its giving a valiant go at the 50 day MA. Seasonality is favorable for gold at this time, giving it some further hope for upside. I hold a minor position in a gold ETF in my equity platform, but nothing to be too excited about. 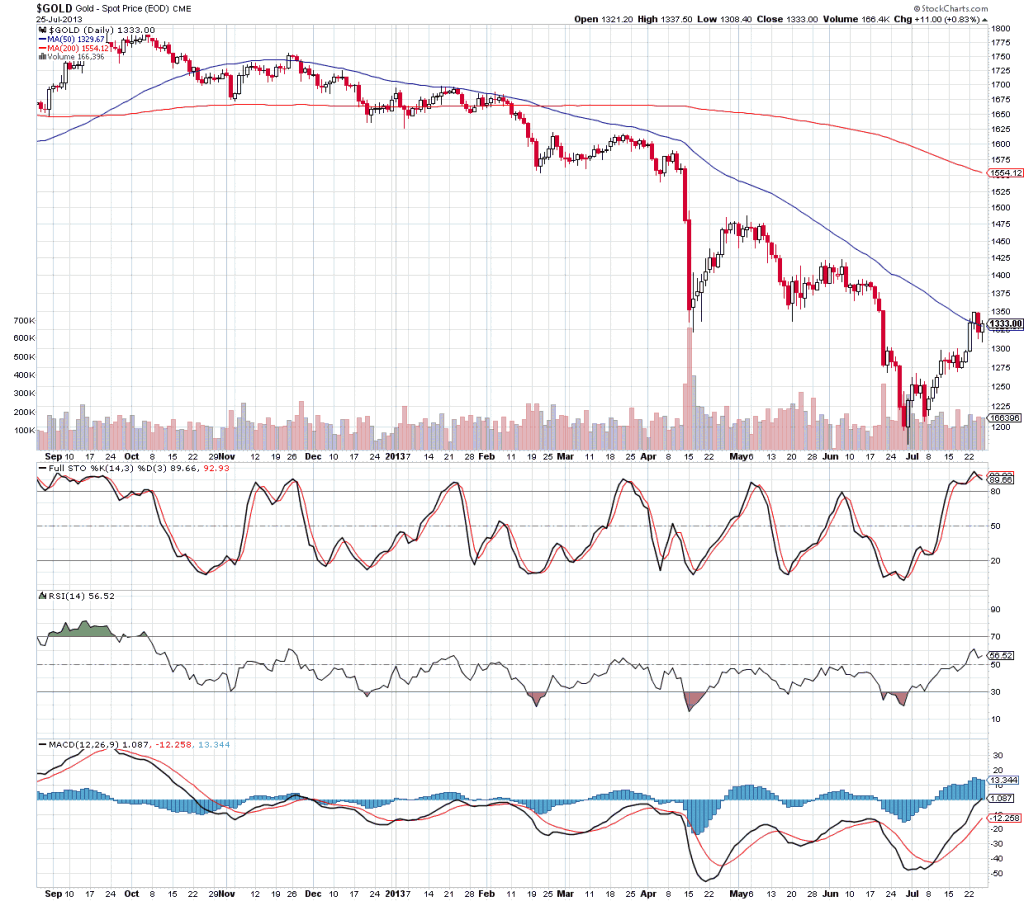