Home / Gold may be nearing a buy point again

Gold may be nearing a buy point again

As a contrarian, I rely at least to some extent on sentiment data. As the Templeton once said:

Today I’d like to look at the sentiment profile of gold, and the gold producers. Then, lets look at their charts.

Here’s the gold optix for the gold commodity ETF “GLD” by sentimentrader.com. This indicator is comprised of:

You’ll note that gold is quite out of favor right now. Take a look at what happens when the optix moves below its “buy” trigger zone at 20. Its typically rebounded when investors and speculators are bearish on the commodity. 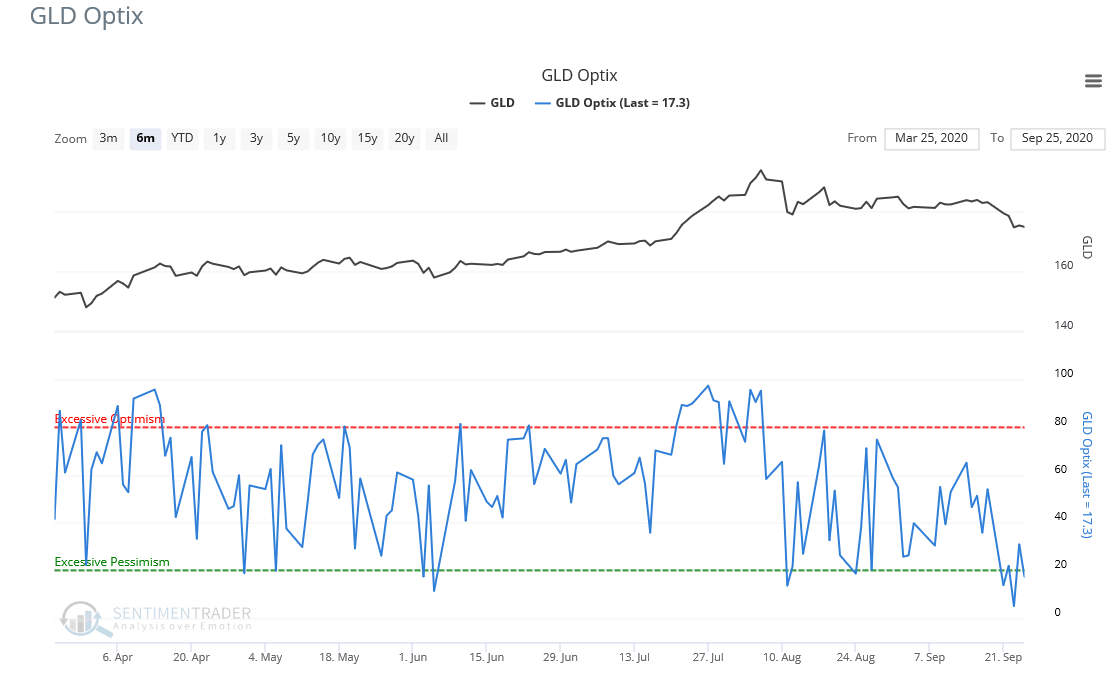 Now lets look at the gold chart. neartermed support on the daily chart at $1900 was cracked recently. Next level is $1825. The momentum studies I watch are getting oversold, and haven’t hooked up yet. But they are close. Combined with the pessimism seen in the sentiment optix, its my opinion that we’ll see a turnaround pretty soon. That might provide a new entry point. Keep a sharp eye on support at $1825 and/ or a momentum hook. As seen on the equityclock chart below, gold can experience a seasonal flat period in the late part of the year, but it often sees strength in the new year. So there’s time to get on this bus. 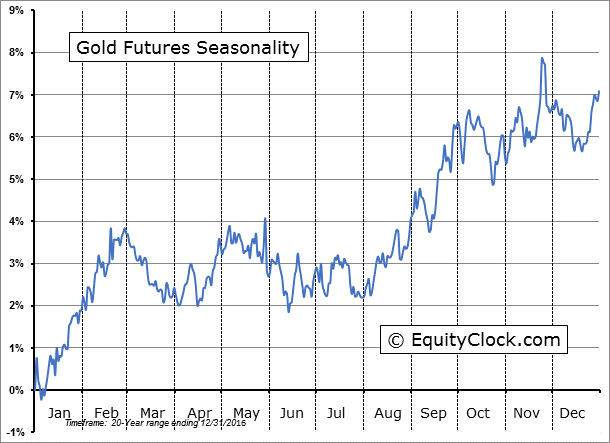 GDX is the gold producers ETF traded in the USA. Like the bullion, GDX is in the sentiment “buy” zone, meaning that its out of favor…..a contrarian signal. Again, note how this ETF tends to rally when the indicator moves below 20 – which is where it is now. 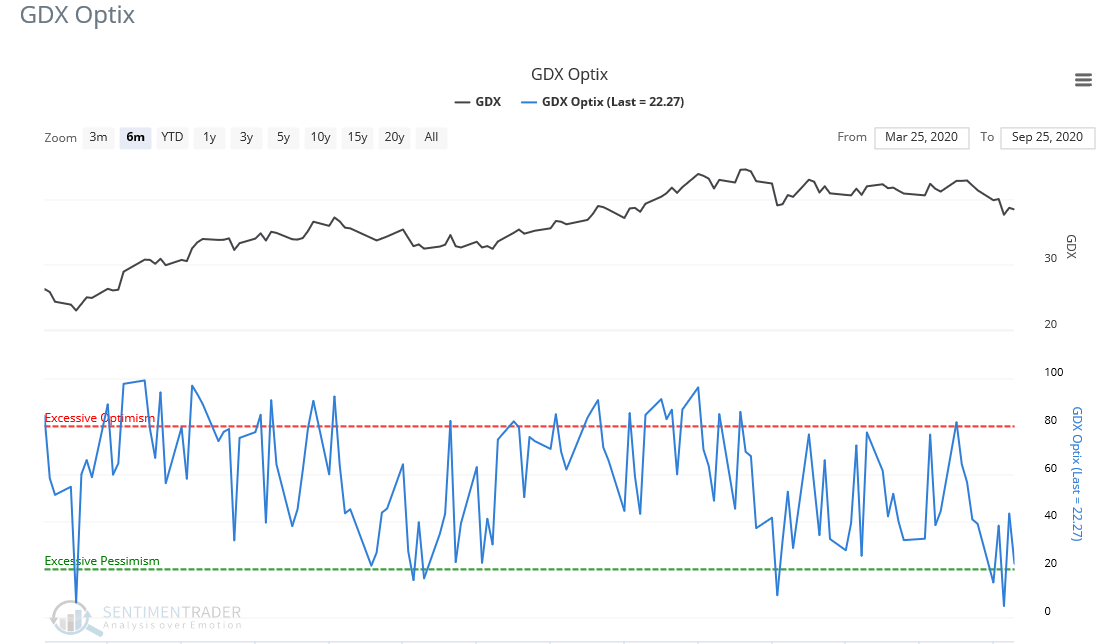 The bearish break of support on GDX at $39 on the neartermed (daily) chart was short lived. Its holding support so far. Adding to the positive is a hook on stochastics and RSI. MACD is a longer termed indicator, and it hasn’t hooked up yet. Given the gold bullion chart and gold seasonal trends, traders who wish to buy gold producers on the shorter termed momentum signals might want to consider legging in, rather than going in with a full position. The chart looks decent, but I’d like to see MACD move up before fully committing. 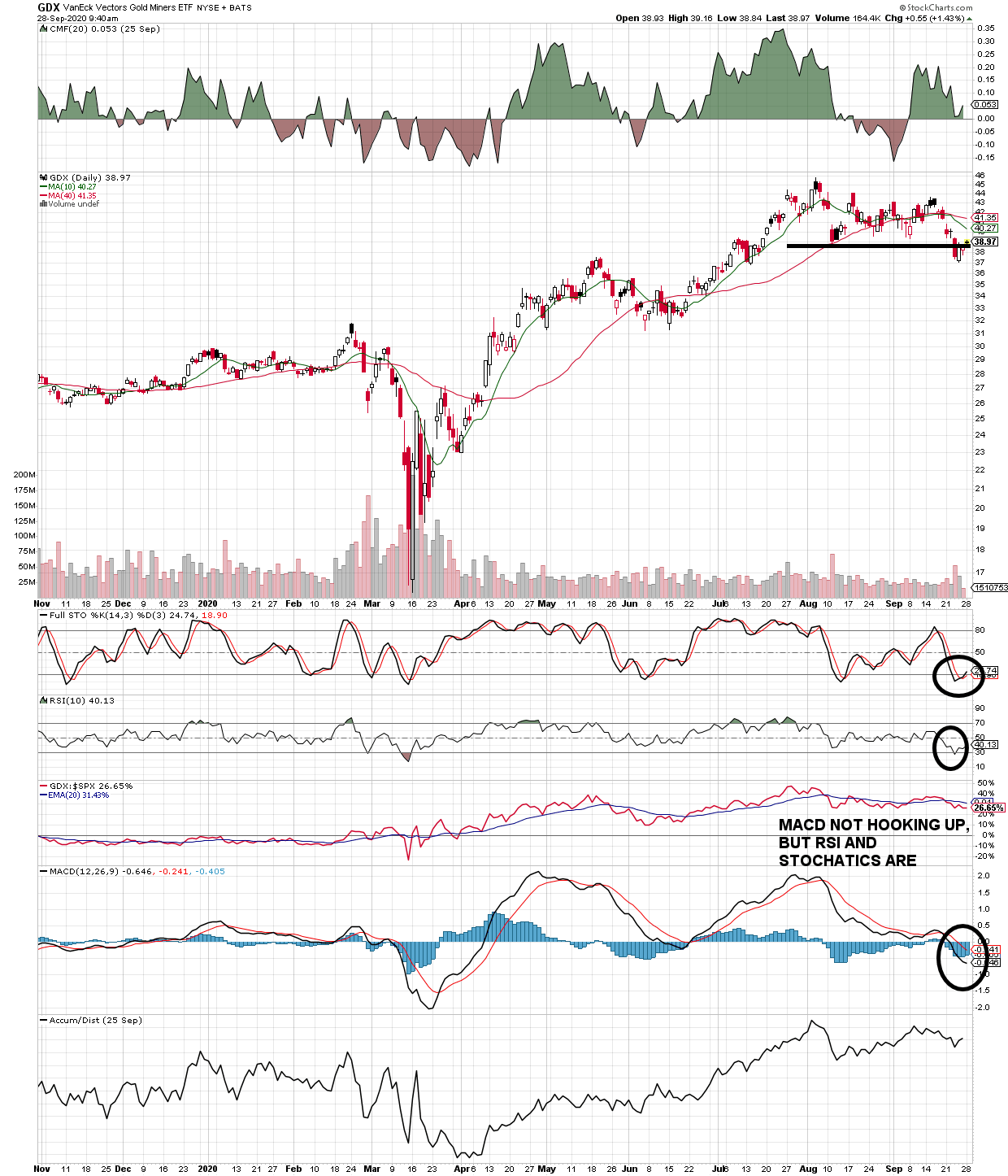 At ValueTrend, we held about 6% gold through the summer. We’d consider adding to that position given the above parameters (bullion holding $1825, a hook on MACD on the producers chart). Its likely the coming days or weeks will offer some opportunities to take advantage of that trade.