The National Post printed an article on January 11th entitled “Generation Yikes”. In it, they quoted a survey by MFS Investment Management. The survey showed that 29% of investors will never be comfortable invested in stocks. More importantly, some 52% of investors under the age of 31 have no interest in buying equities. This high percentage of non-equity buyers in the upcoming generation is important, because the former bull market was driven by a generation of baby boomers as they reached their peak spending/saving/investing years. The boomers, who are now retiring and investing more conservatively will not be there to push the markets higher – and it would appear that Generation Y may not help drive us into a new bull market either. Hard to blame them, given how difficult it is to reap a profit from the markets these days, unless you utilize a trading strategy focusing on technical analysis, of course!

To learn more about how boomers can thrive in todays markets, you can access my latest Investors Digest article free, by clicking on this link: here.

Nasdaq may pull back

I sold a number of positions that were residing in the portfolios I manage last week, focusing on higher beta sectors such as technology and consumer discretionary stocks. As mentioned on my prior blog, stochastics is a bit overbought for a few key sectors. Further, there is a tendency for markets to get a bit weaker in the second half of January – particularly the NASDAQ. Positive seasonal influences on technology stocks – a primary sector in that composite – come to an end around this time of the year. This week, we have some major tech stocks reporting such as Intel, Microsoft and Google. After that, Apple reports on the 24th. Not being a fundamental analyst, I won’t hazard a guess to their earnings success. However, there is enough evidence of the NASDAQ being in somewhat overbought territory to consider reducing exposure to this sector. The chart below shows stochastics, and a shorter RSI (10 day) playing with overbought territory for this index. The NAZ is also approaching some technical resistance around 2750-ish, along with the top of its Bollinger bands. Comparative relative strength to the S&P 500 remains strong for this index, but I am wary enough of the other factors to expect at least a reasonable pullback in the near term. 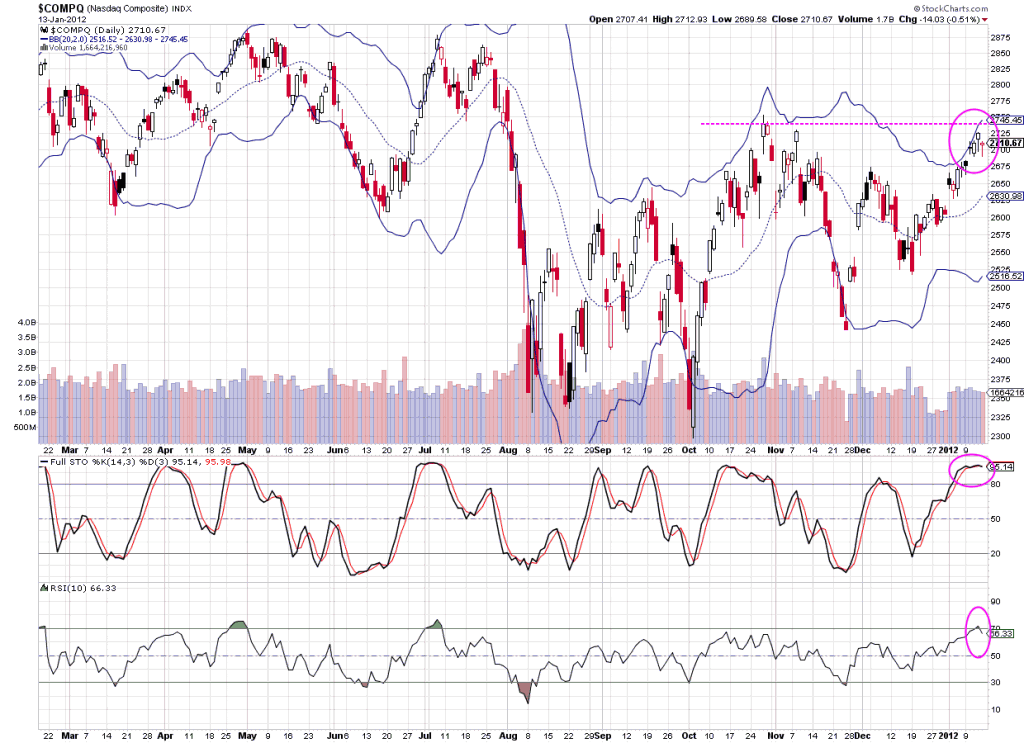