Despite any neartermed clear and present danger (thank you, Harrison Ford) that I’ve covered in this blog of late, I would like to remind readers that the macro (big picture) view of the stock market is for continuation of the bull market that began in 2013.

On the chart below, you will see the consolidations, marked by the horizontal lines, and bull markets, which are highlighted in pink.  I do not consider a breakout from a past consolidation phase as fully confirmed unless the last peak is higher than the prior peaks AND a trough is above the last trough. That, plus the move above the 10 month/40 week/200 day MA (all of which are similar time periods) – depending on whether you are looking at a monthly, weekly or daily chart. I didn’t put MA’s on this chart.

You might wonder why I consider the 2000 – 2013  a consolidation period—when clearly, the Dow Industrial Average (INDU) had put in a new high in 2007. The reason is because the 2008 trough was lower than the prior trough AND (more importantly to me) the peak on the INDU in 2007 was NOT verified by a peak in the broader S&P500 (which was virtually flat).

BTW–I use the INDU chart because it goes back further than the S&P500. Frankly, the S&P500 is a better index to follow, but it doesn’t have the length of history. 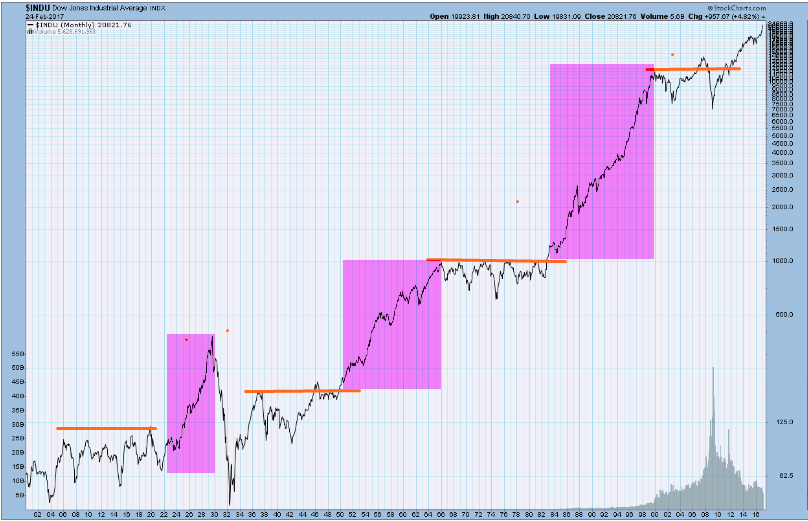 I start measuring the bull market from the breakout point after the prior peak was taken out. Most market pundits start measuring a bull market from the trough low – which to me is just an exercise in hindsight. From a practical point of view, we don’t know that a particular trough within a consolidation is the final trough. But we do know when the market makes a high that takes out the last high.

So…Using that rule of thumb, we have the following bull markets since 1900 (see my book SmartBounce if you wish to see the two consolidations and breakouts prior to those noted on this more limited historic chart):

From the above, we might draw the conclusions that – should we follow the length of the shortest bull run since the early 1900’s – this might be the last year of the current bull. However, we might just note that the bull market lengths seem to be getting longer. From 4 years to 16 years to 18 years….perhaps the current bull will last longer than the last bull, which was the 1982-2000 bull market.

Even the most pessimistic amongst us might draw the conclusion that the market has at least many more months to run – and traditional technical analysis might suggest that “the longer the base, the greater the case” for a longer bull market. The consolidation between 1965 to 1981 represented a 16 year sideways market. The breakout in 1982 resulted in a 18 year bull market (to 2000).  Because the last consolidation period went from 2000- 2013 (13 years), we might hope to see a bull market trend that lasts for well over a decade. I must admit, I am of the opinion that we have many years to go before this bull market is officially over.