Home / FOMO: Learning from a legend, and the next stocks to buy

FOMO: Learning from a legend, and the next stocks to buy

Incompetent people are at a double disadvantage since they are not only incompetent, but unaware of it.

The above quote echos my thoughts towards the current Prime Minister of Canada and quite probably the US President .

The thing I like about truly competent people is that they can make a mistake and LEARN from it, rather than repeat it in the future- as the above politicians seem to struggle with. On the subject of learning from mistakes, long timed hedge fund manager Stan Druckenmiller confessed an error he made when feeling pressured to “be in the market” when everything told him not to be. This is called FOMO (Fear of Missing Out). 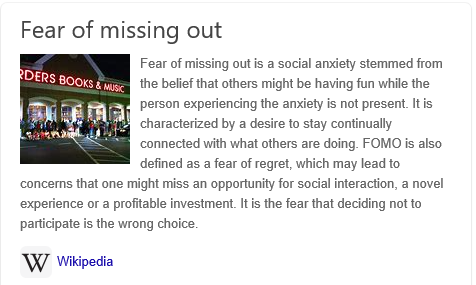 Mr. Drukenmiller turned out to be a very honest man who could reflect on past mistakes. In 2010 he wrapped up his hedge fund after 30 years of running it with early success. As markets began to change, he realized his emotions and his analytics were in too much conflict to operate the fund. He told clients that he’s “returning their money and ending his firm’s 30-year run, citing the ‘high emotional toll’ of not performing up to his own expectations.”

Below is a memo he posted in 2015 looking back at those times. It really does mirror the FOMO prevailing in current markets – and how hard it is for ANYONE to stick to their guns in times like this. 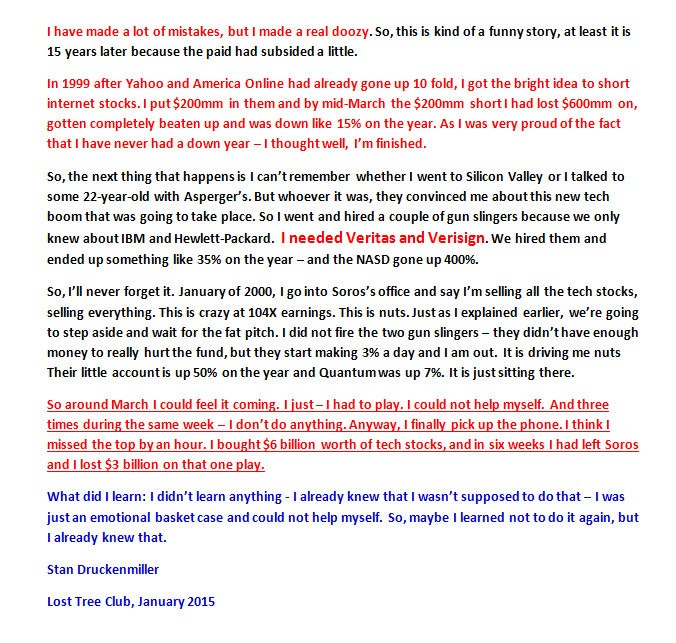 But the market keeps rising!

Fear of missing out is the order of the day. But what are we actually missing out on? Below is an illustration of what the S&P 500 and its fabulous rise would actually look like without the FAAANM plus 4 other stocks (list below) 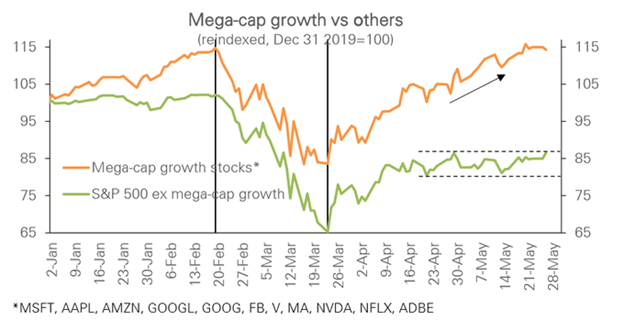 In fact, The S&P is still ugly if we remove the FAAANM stocks–see chart on the right, below.

To carry it further, we are not missing out on too much on the international scene either. The chart on the left (below) illustrates the MSCI ex-the SPX.

Below is a chart of the Vanguard Growth Index. Note the momentum studies (RSI, etc), note its old highs are almost being touched. Not yet overbought, but very, very close. Relative strength vs the SPX has been huge (second pane from bottom) since the winter. Guess what its holdings are comprised of? Three guesses, the first two don’t count… 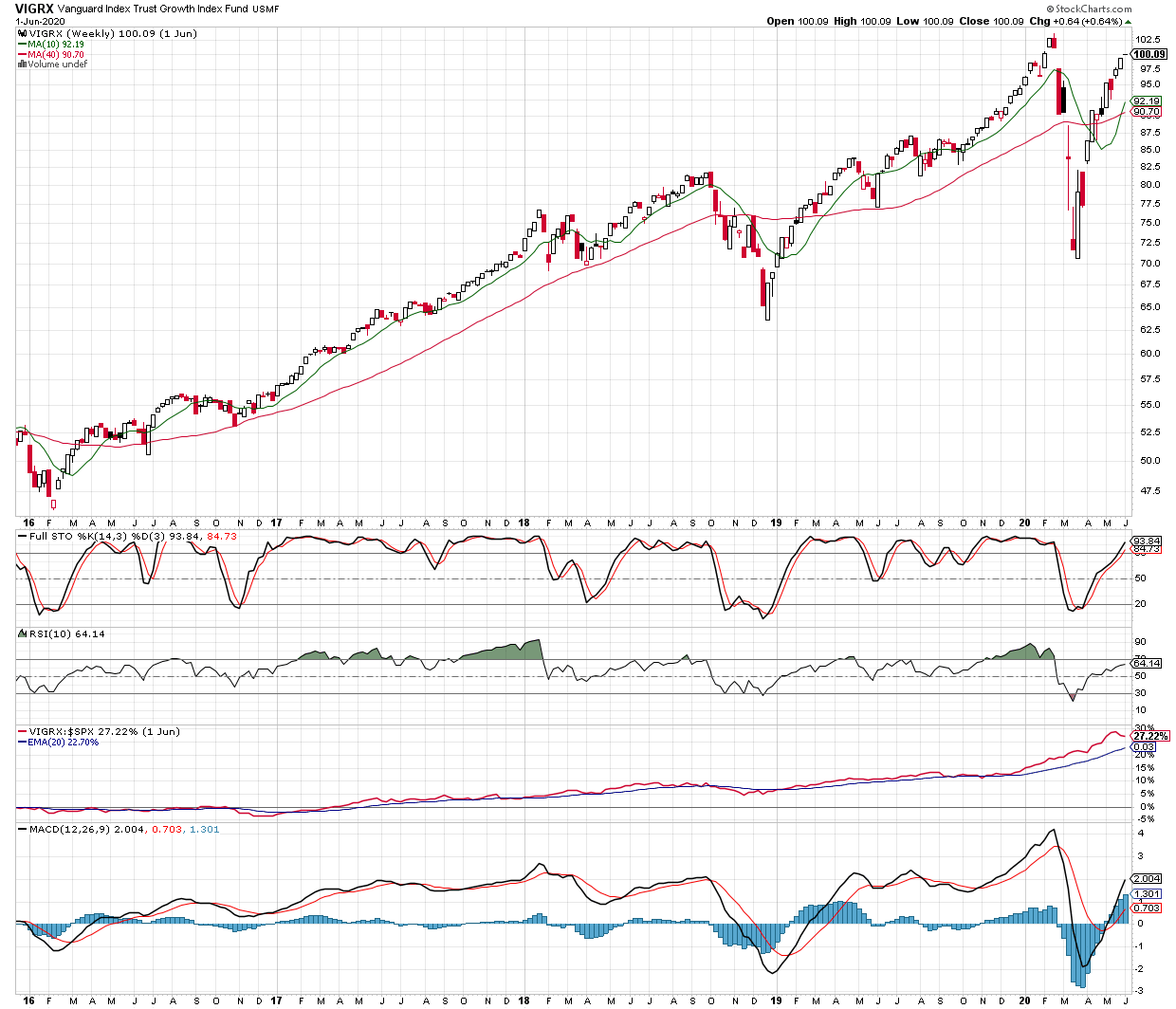 Bingo–give the lady in the front row a prize for guessing that its top holdings are…wait for it…(rounded off)…MSFT 10%, AAPL 9%, AMZN 8%, the FB, GOOGL, NFLX, V, etc. filling out the rest. The exact stocks shown in the charts above. Who’d-a-thunk it?!?!

Now lets look at the Value Index from Vanguard. Note the momentum studies are hooking up from an oversold level. MACD is just now crossing over! Comparative strength vs the SPX still sucks. 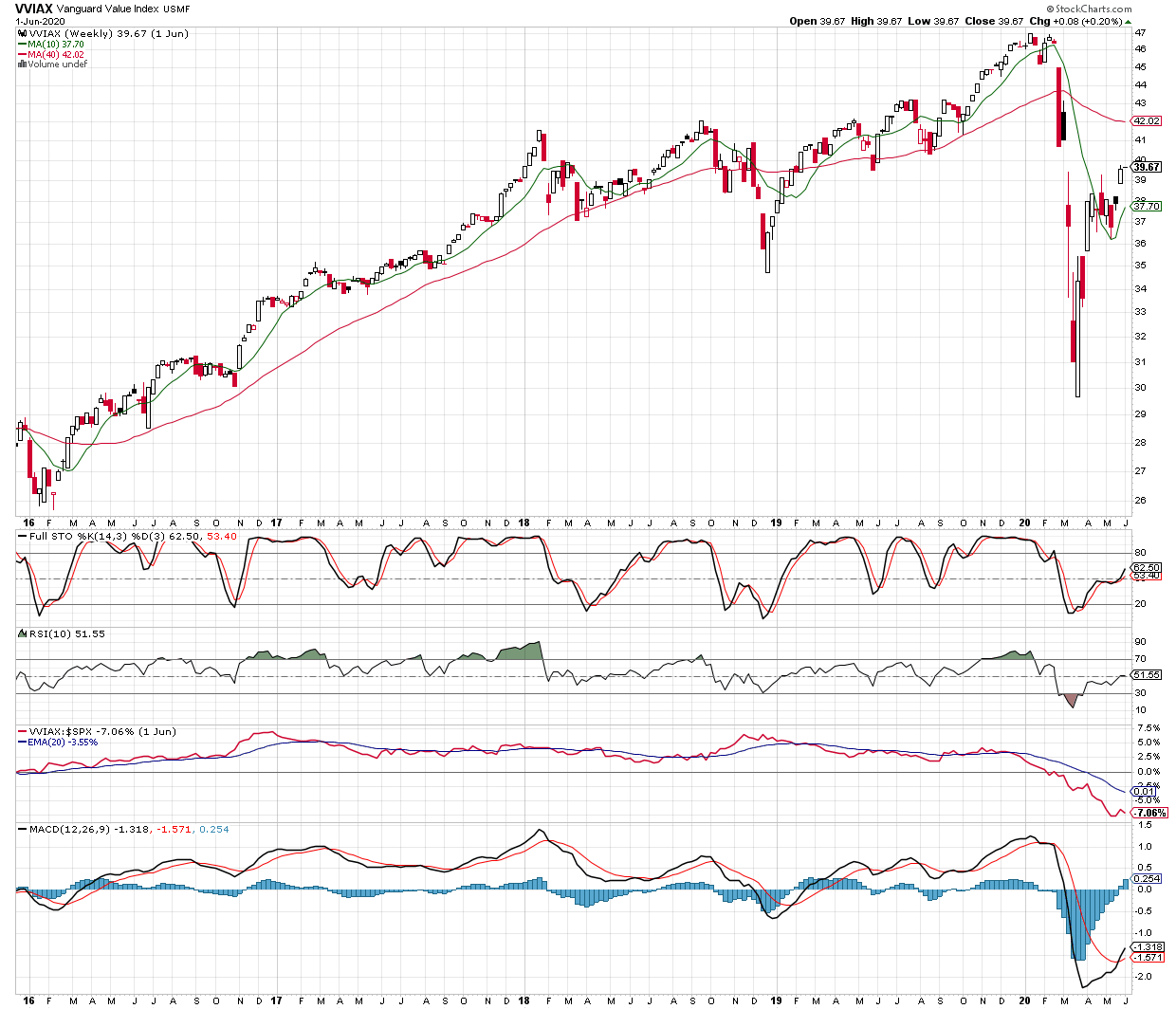 This index ETF has holding like JNJ, PG, BRK, UHC. Sure, they may be boring stocks, but I guess some of us don’t mind missing out on the excitement of owning something like Amazon with a forward (not trailing!) PE ratio based on current Thomson Reuters data of 130 times. OK. That’d be some good value in that-thar stock!

Mr. Drukenmiller’s lesson hit home with me. We’re avoiding too much exposure to the FAAANMG’s (these acronyms are killing me!) . We have a couple of them but we’re underweight the group. That, plus our cash weighting has caused us to under-perform during the V-rally off of March 23rd lows. But I’m convinced I’d rather own JNJ (we do) or Berkshire (which we do) over something like Amazon with a PE ratio that’s more than twice that of my age. That, and its parabolic stock chart.

The Vanguard Value Index looks ripe as a bullish setup, with its hooking momentum studies, etc. We don’t own that ETF, but we are picking among various “value” stocks here and there. We’re searching for positions that we can sleep at night without worrying too much about. We’re also building some inflation trades into he portfolio.

Oh, and also:  Yes, we are in the process of legging in with some of our cash – given the breakout of the 200 day SMA. But we’re still keeping a ton of powder dry. By focusing on value, a little bit of commodity exposure, and holding plenty of cash, we may miss out on the casino-like excitement. But, them’s the breaks when you manage conservatively.