I’ve been trading Nat gas since 2010 . This commodity is a pretty good one to trade technically.

One trick of the trade when it comes to triangle breakouts is to measure the distance from the widest part of the triangle (left side of the chart) and extrapolate that move forward (upon a breakout) as your target. The theory is that the security has illustrated a certain level of volatility in the past. By extrapolating that volatility forward, we can predict how much the security might move. Its past volatility is a reasonable estimate for how the security might act again in the future. After all, traders pushed the security aggressively by that degree of price movement in the past – so it makes sense they might do it again.

On today’s chart, you can see the left side of the triangle was measured as a 33.9% move from the horizontal support line to the highest point in the triangle. If we measure that same 33.9% from the recent breakout point of approximately $3 – you get a target of $4. Guess where Nat Gas sits right now? It’s at around $3.80, which is within spitting distance of the measured move target.

Given the measured move projection of $4 in relationship to current prices, the current seasonality for gas (which is neutral), and the overhead resistance which lies at $4 – right at the top of the left side of the triangle—I’d avoid this trade.

It’s all about discipline

Thought you guys would appreciate the article published in Wealth Professional Canada Magazine. I was called by a reporter of the magazine – not to cover some technical market outlook – but to talk about how I translate my investment discipline into my other passion: time trial bike racing. There are many similarities between the two disciplines – including a quantitative approach to analysing the race course or market environment, and searching for every edge possible to win a race/ or to win a trade. Hope you enjoy this short feature, and my photo suffering as I approach the last kilometer of a race. 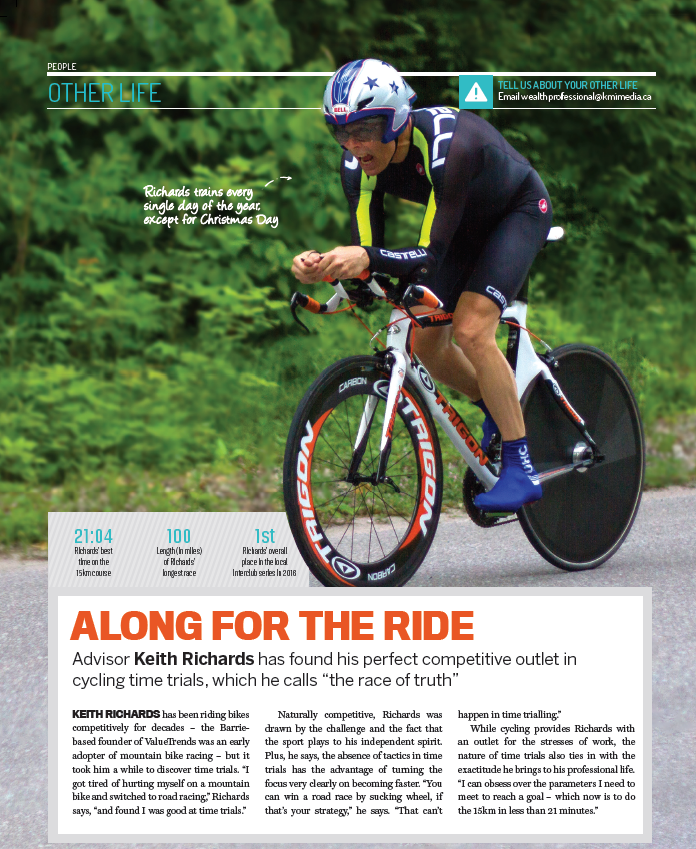