Fear the walking Fed (and the Big Bag of Biden Borrowing)

I borrowed part of today’s title from a BMO research report – borrowed from the hit television Zombie Apocalypse series “Fear the Walking Dead”. Beginning mid-November, BMO notes that the current monthly purchase pace will be pared by $10 billion and $5 billon, respectively. And, a similar taper will occur mid-December. The recent Fed statement said that “similar reductions in the pace of net asset purchases will likely be appropriate each month”. It’s anticipated that the Fed will have stopped accommodation by June of next year. Here’s the important thing that I will address in today’s blog: I continue to suggest that the inflation threat, and the corresponding countering by the Fed, will be bigger than anticipated.

Hey, don’t get me wrong. The Fed has now pushed its inflation expectations to longer than their original statements. It now says it expects “elevated” inflation will persist well into next year owing to longer lasting supply bottlenecks and shortages. But don’t worry, they say – it will start “moving down” by the second or third quarter as these supply constraints abate. And this is where I am calling them out. I noted recently that its not just the supply chain that is pushing inflation. Its going to be wage inflation that will keep this inflation party going. Again from the BMO report: With production and nonsupervisory workers’ hourly wages up 5.7% y/y (btw, above both CPI and PCE inflation), and the trend in hourly compensation costs among nonfarm businesses up 4.1% annualized after adjusting for productivity gains the Fed may not be watching for long before it starts “walking” (tightening) again.

As readers of this blog know – we at ValueTrend were very early on the inflation trade, and we have been pounding the table that this “transitory inflation” talk by the fed is self-serving nonsense. Here’s why: In the face of longer termed inflation, easy money policies of the Fed and obscenely large Fiscal spending by Biden’s hard-left policies would be imprudent.  And Biden owes the Bernie Sanders followers, who threw their support behind his election. That means social spending, and lots of it….a recipe for piling more wood onto the flames of inflation. Far better to deny inflation now than break the promises to those you owe your power to. Read my comments regarding tax n’ spend MMT concepts here.

As such, now I am seeing the big banks in both the USA and Canada finally recognize what we at ValueTrend have been saying all along. To quote the BMO report “We reckon persistently strong underlying demand, pumped by excess savings and liquidity, will encumber the abatement of bottlenecks and shortages. This will likely result in an inflation profile that—once again—is higher than the Fed anticipated.”

Beware the “Walking Fed” and the “Big Bag of Biden Borrowing”!

No doubt that the Fed will inevitably be forced to address the  “threat of more persistent, longer-term inflation” as it becomes apparent that inflation isn’t ebbing as much as promoted.  The Fed will likely concede that these risks and threats have escalated to the point of necessitating rate hikes faster and greater than expected. But for now, transitory inflation is the talk – and we know the reason why. I continue to recommend that readers of this blog maintain a presence of inflation sensitive positions. This means commodities, and the producers. It means stocks that benefit from rising inflation (rising interest rates) such as financials. It also means reducing exposure to interest sensitive stocks like utilities. 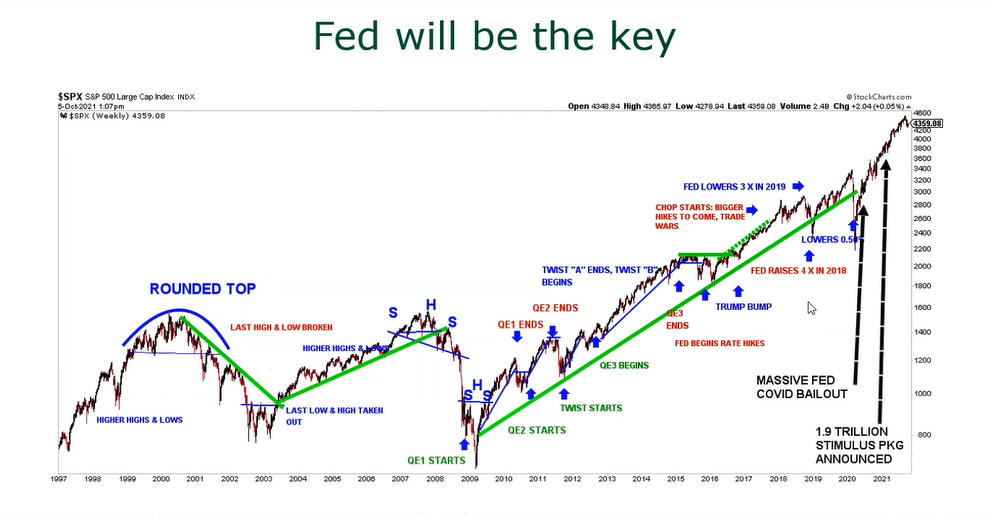 Finally, above I’ve posted the same Fed-taper chart that I have posted a few times in the past. Don’t fight the Fed, as is said. Fed tapering events are highlighted in red. What happened after every taper? Answer: Pullback!

Sure, inflation is spiking right now, and is likely to pull back a bit in a year or so as the supply chain at least partially works  its way out of its dilemma. But, as I have noted before, wage inflation is a longer termed, more sticky type of inflation. And that’s here to stay for a while. And if Biden gets his next round of spending, which is largely focused on social policy (aka non GDP-enhancing) – that will certainly fan the fames of inflation.

Beware the day that the market wakes up to the fact that this is not transitory inflation.

Beware the need by the Fed to counter that inflation.