FANG’s (Facebook, Amazon, Netflix, Google) have been the strongest performers on the market for some time. We at ValueTrend hold Google and Amazon, and have enjoyed the run. FANG’s a lot, guys!

We are now facing a dilemma. This group is quite overbought. By all accounts, I absolutely expect a correction sooner rather than later on our two stocks, and for this group in general. The question is – how much of a correction?

The problem with selling an overbought stock that’s in an uptrend is that you really are not selling into a technical breakdown. What you are selling is a strong stock that is trending up – yet deserving of a healthy pullback within the uptrend. If the pullback were to be, say, 10% or less – it is my contention that it is simply too difficult to play that trade. For example, each of these stocks have been overbought from either February or April. Stochastics – the quicker mover of the momentum oscillators- has been overbought since late February or March on most of the stocks. RSI, the mid-termed oscillator, has been overbought for 2 months or more. Had you sold on those signals back in February or April, you would have missed out on 15% or more in gains on pretty much the entire group. So – selling an overbought up-trending stock is hard to do at the right time.

Even if you are lucky (very lucky!) enough to pick the top–where do you buy back in? Will the stock ever go oversold – or will it pull back, say, 8%?  If that happens and the oscillators return to their mid-range levels, will the stock then immediately turn around? Are you so smart that you can sell the very top, then recognize if the stock has put its full corrective move in an uptrend correction?  If so, my hat is off to you!  Most who try this trick sell on an overbought signal, and then watch the stock rise another 5-10% from their sell price to get even more overbought! Then, they finally see the stock fall 15% from this new high–which is 5% below their sell price. At this point, they buy back in after it begins to rise again, probably at or higher than where they sold. A frustrating game, indeed.

Sometimes history can be a guideline for future volatility in a stock. Google, for example, has had a couple of 10%-ish corrections here and there (2014 being the most prominent) – but its largely been a pretty tame stock to own. 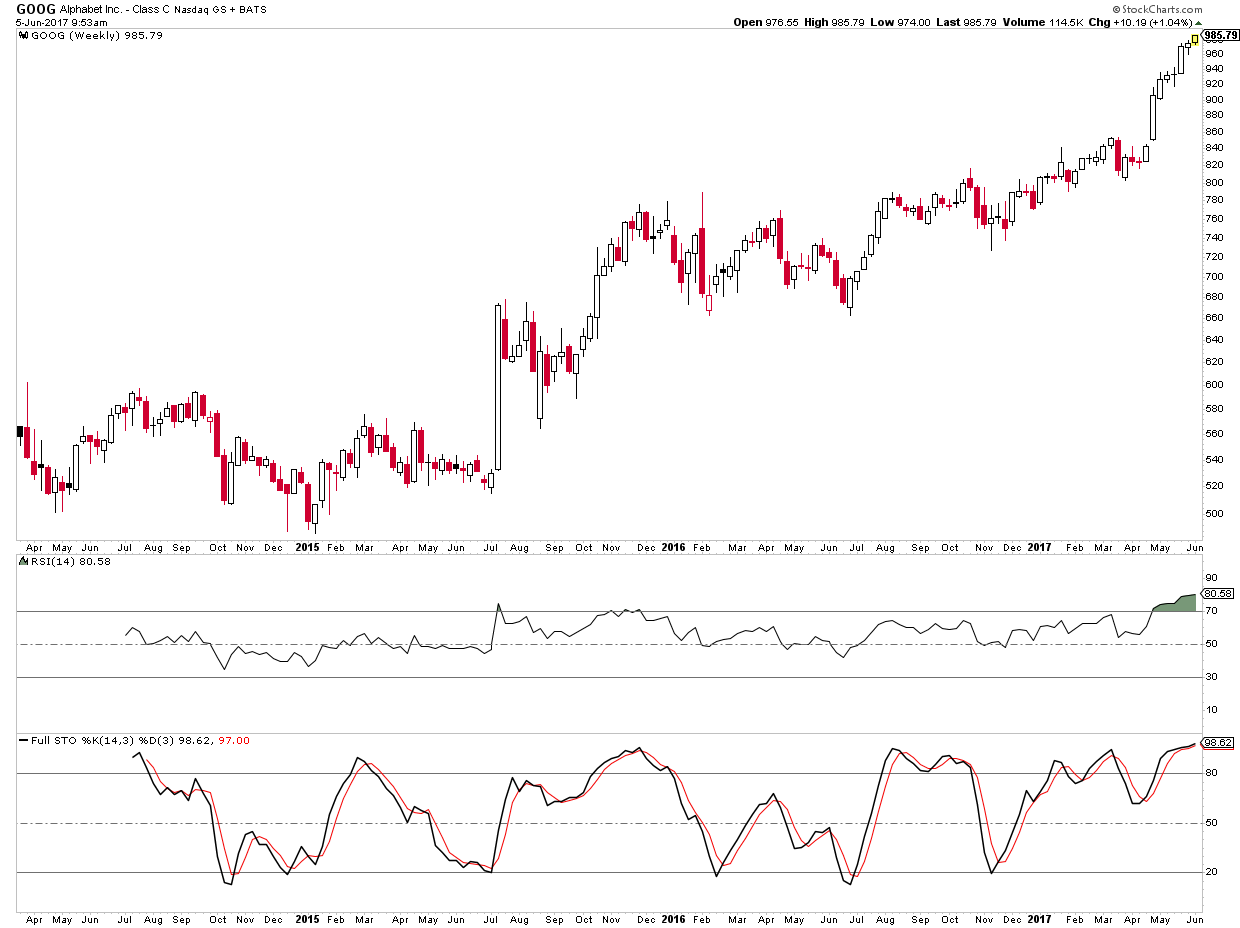 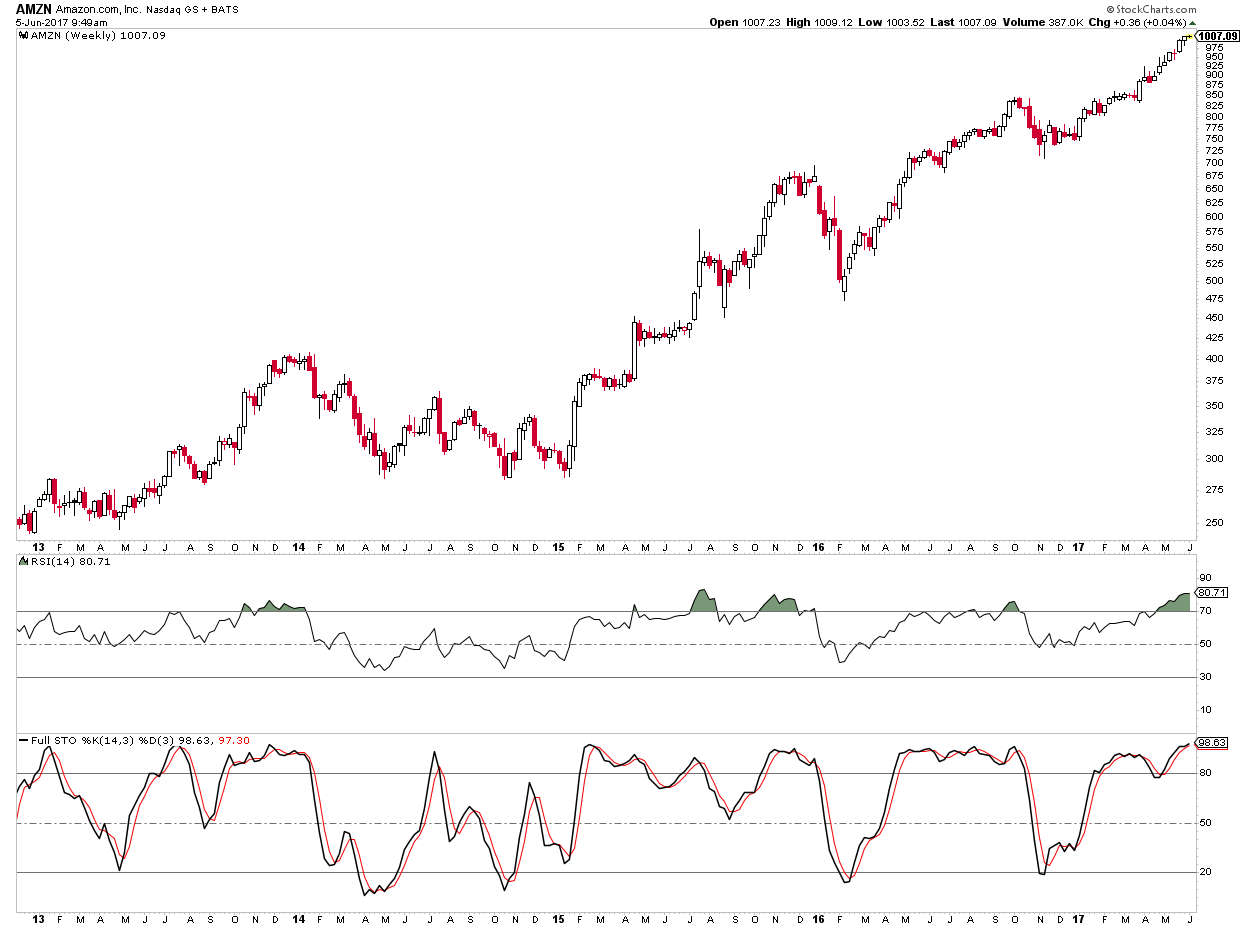 Google and Facebook appear the least volatile of the group. If you are looking to sell any of these stocks, you might expect that the better candidates to do so – assuming you are confident in your ability to sell “at the top”- would be the Amazon or Netflix. It’s obviously better to sell a stock that might have potential for a 20% correction vs. one with a 10% correction potential. 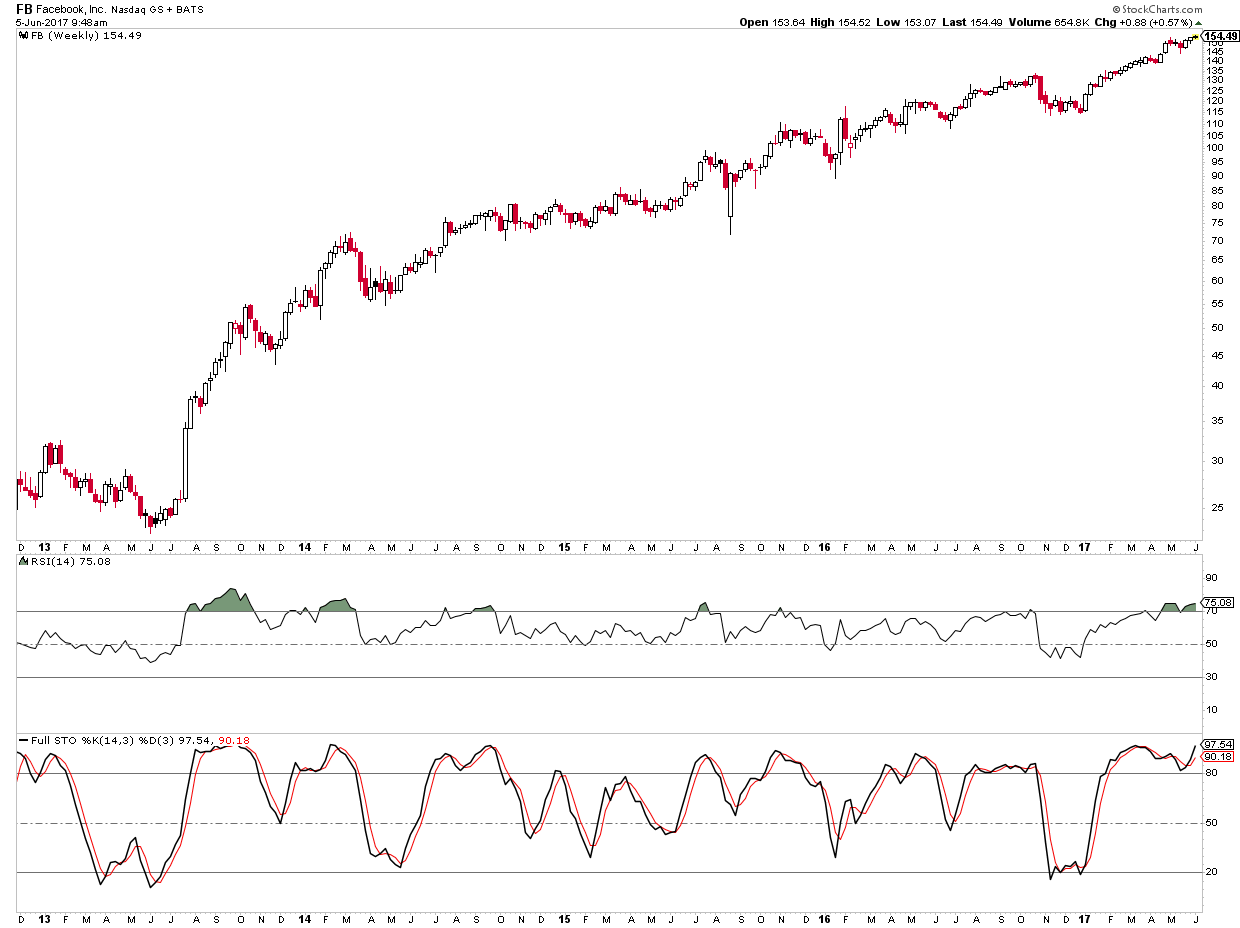 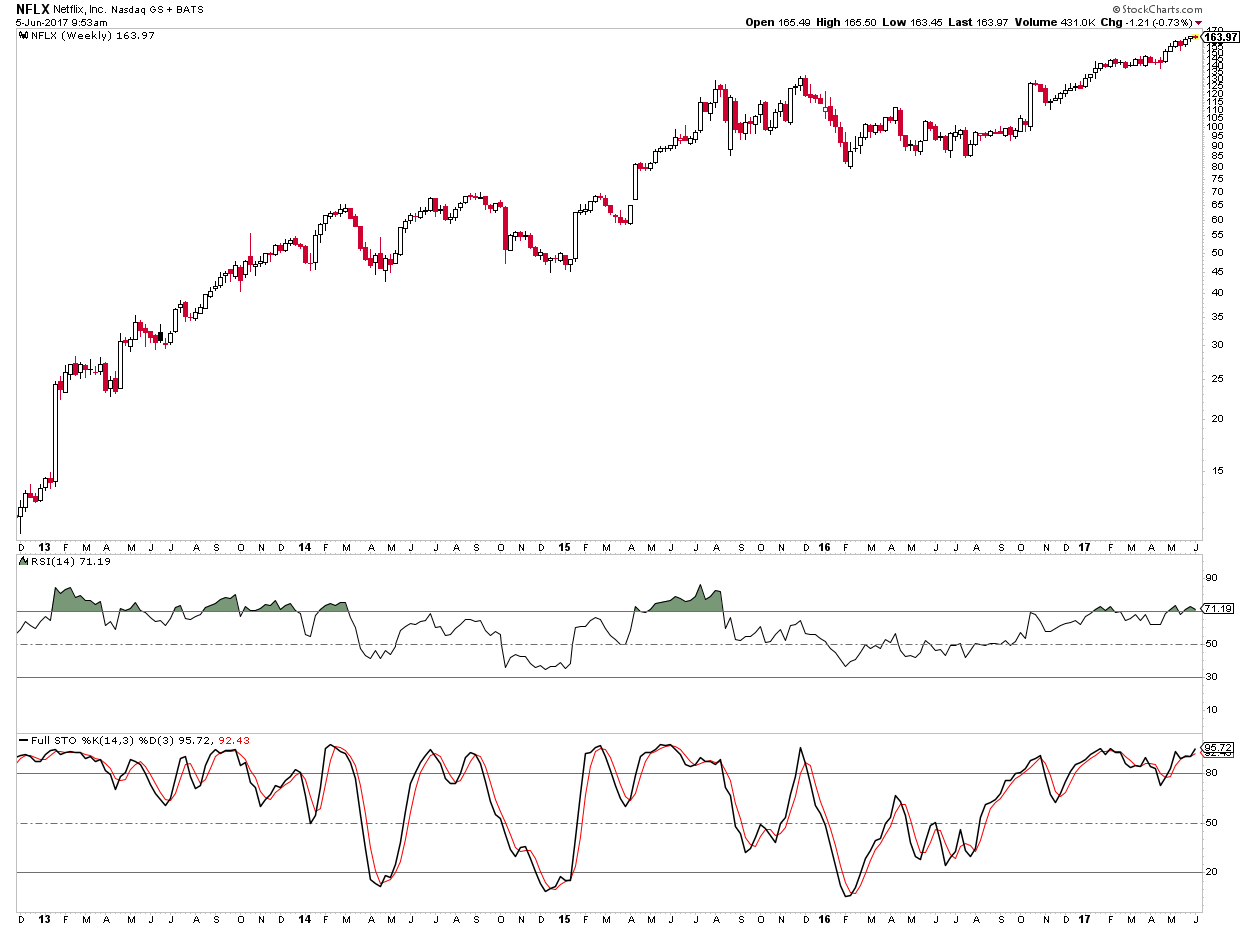 Were I to sell either of my positions – I’d probably pick on Amazon before selling Google. I would also rather hold Facebook than Netflix if a correction was in the cards. That being said, I have not made any decisions to sell either of the stocks we hold (Google or Amazon) at this time. Assuming their positive long term trends remain intact, a correction in these stocks might also represent a good entry point.

Keith will be on BNN’s popular call-in show “MarketCall” on Monday June 12th for the 1:00 pm show. Phone in with your questions on technical analysis for Keith during the show. CALL TOLL-FREE 1-855-326-6266. Or email your questions a few days ahead of time (specify they are for Keith) to [email protected]

ValueTrend Equity Platform Performance posted for end of May 2017

Your comments are appreciated. Be sure to leave a comment or question if you have one on the blog. Also, be sure to pass this blog along to other investors who you think might enjoy reading it – click on the “share button below.