Home / Everything’s up – but is that good?

Everything’s up – but is that good?

The past month or so has been unusual.  Both “risk-on” and “risk off” assets have rallied. Risk-on refers to the broader S&P 500, and of course the tech stocks and other NASDAQ components. Risk-off refers to gold, the USD and low-beta sectors. They’ve all gone up together in the past 30  + days.

Sentimentrader.com notes that this occurrence is a relatively rare setup. They presented some studies of the  returns for the S&P 500, and for gold, after a simultaneous run of 32 days by these normally non-correlated asset classes. Here are the statistics for the SPX after such a run: 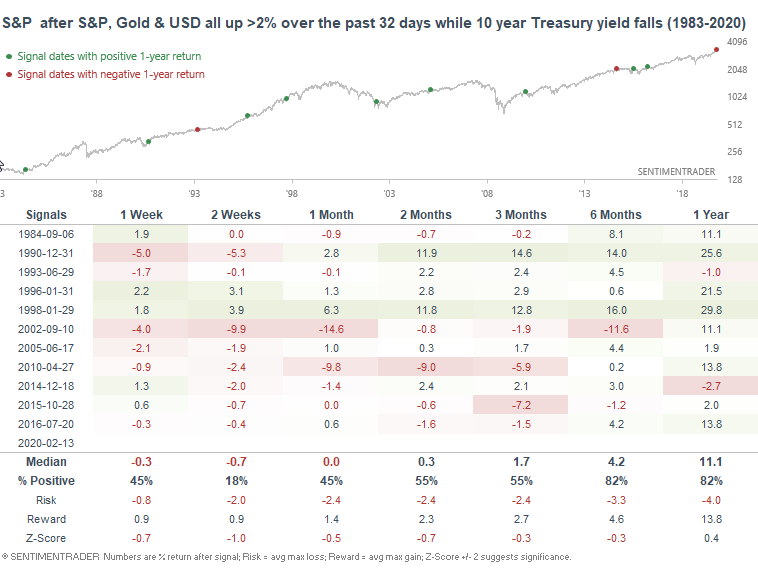 Note that the number of positive returns from these setups one month later are skewed negatively (45% of months following such a run were positive, 55% negative). The three month average is also pretty negative, considering that markets have an upwards bias most of the time. Returns were positive only 55% of the time. It was only after 6 months that markets returned to a normally positive bias (82% of the time markets were up six months after a similar “everything” rally). Interesting.

Statistics are one thing, but we also need to take a look at the technicals for the SPX . And those technicals are showing signs of being a wee bit overbought.

Take a look at the chart below. Note in early 2018 how far the SPX was above its 200 day  (40 week) SMA (Simple Moving Average) . Recall my rule of 10% for that relationship. As the market gets to be more than 10% above its 200 day SMA, it becomes more and more likely to correct. The SPX was almost 12% ahead of its 40 week SMA just before its January 2018 correction – this, after a parabolic run over the second half of 2017. Sound like a familiar setup? This incepted a sideways year for markets in 2018.

Right now, the SPX is about 10.3% over its 200 day SMA. BTW – this “10% rule” works the other way too. Note the the 17% move BELOW the 200 day SMA that indicated how oversold the market became in December 2018. The spread between the 200 day SMA and the market can vary, but the basic rule is to pay attention if markets have a 10% or higher differential to the 200 day (40 week) SMA. An overbought or oversold market can move back to its average quickly.  The extent of the return is greater when markets are far ahead or below their 200 day SMA.

Now let’s look at gold, and how it performed following the 32 rally as described above. Here is the sentimentrader.com chart: 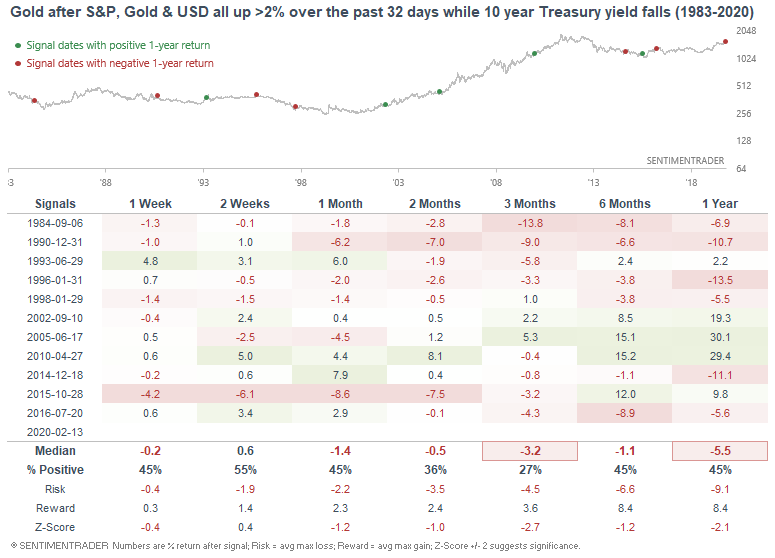 Note that the early months after such a setup are about random, with a slight positive bias in the 2 month return. But returns going forward were negative on average. That’s probably because gold is non correlated to stocks. So the fact that stocks became neutral to positive after that first two months (when gold returns became skewed to the negative) makes sense. Below is the gold chart: 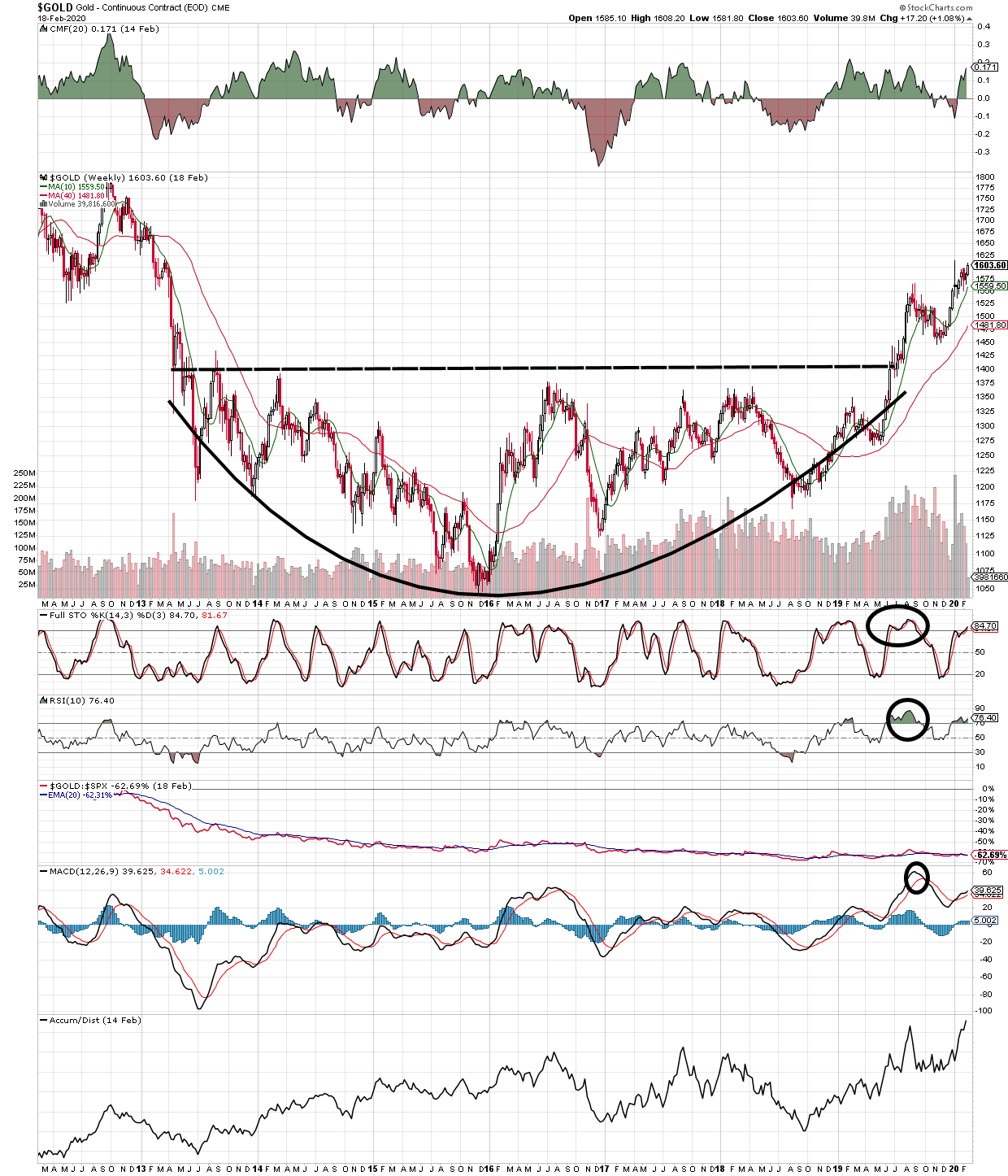 The chart shows the bigger picture to be bullish (Cup & Handle B/O) with a potential target in the $1800 area. Neartermed momentum is overbought (RSI and stochastics). Longer termed momentum (MACD) is not. Seasonals are typically flat for gold from now until August.

Gold might have a bit of an edge if the markets correct over the very nearterm (2 weeks to a month). Stocks are decidedly overbought right now, and might see a small correction – gold could see a move if that happens. Beyond that, the picture is neutral for gold. It’s a decent chart, but the seasonals don’t support the play. Stocks have an edge into the spring. So I say, own some gold as a hedge if you wish, but you probably won’t outperform stocks for the next few months, aside from a short termed reaction to an overbought stock market pullback.