Equal weight indexes give the same weight to each stock in the index.  Both small and large companies are given an equal  “importance” in the index.

Most indexes are not the equal weight type. For example, the TSX 300 and the S&P 500 give differing “importance” or influence on the index based on the market capitalization of each stock. Capitalization (Market Cap) is calculated by the current share price multiplied by the number of shares outstanding. The TSX, for example, places more weight on the banks (RY, TD, etc), Shopify, and Enbridge than it does on Ballard Power or Altagas. This means a rally of 2% by Ballard Power will not offset an equal decline by Royal Bank, given the larger weighting in Royal Bank.

Same goes for the S&P 500 index. Its not going to be a surprise for you to hear that Microsoft, Apple, Google, and Amazon are the most influential on the index. A move on JP Morgan, with about 1.2% weighting on the index, is less influential than one by Microsoft, which weighs in at over 5% of the index.

The problem with cap-weighted indices lies in the distortion of breadth. Clearly, with almost 20% of the SPX’s return coming from 6 names, its not showing how the “real” market (broad performance of stocks) is doing.

So, to rectify that problem, I like to look at the equal weighted index comparisons once in a while. Below is a chart comparing the SPX (red line) vs the Investco equal-weighted S&P 500 ETF (RSP-black line). The lower panel is the relative strength comparison of  the two.

Note that the equal weighted index was largely in line with the cap-weighted index up until around December of last year. That’s when the top-weighted stocks of the index clearly took the reins, and the relative performance line started declining. That under performance has become even greater of late–note the RSR (black) line has really not done well since the COVID crash.

The message here is that the broader US market in general is not doing all that well of late. The SPX is painting a false picture, of sorts. Its been a pretty select group of names that are doing all the heavy lifting. Not a great sign – I’d prefer to see a return to the more evenly distributed returns. In my opinion, that outcome is likely. This probably means an under performance of the FAANG’s (etc) sooner rather than later. 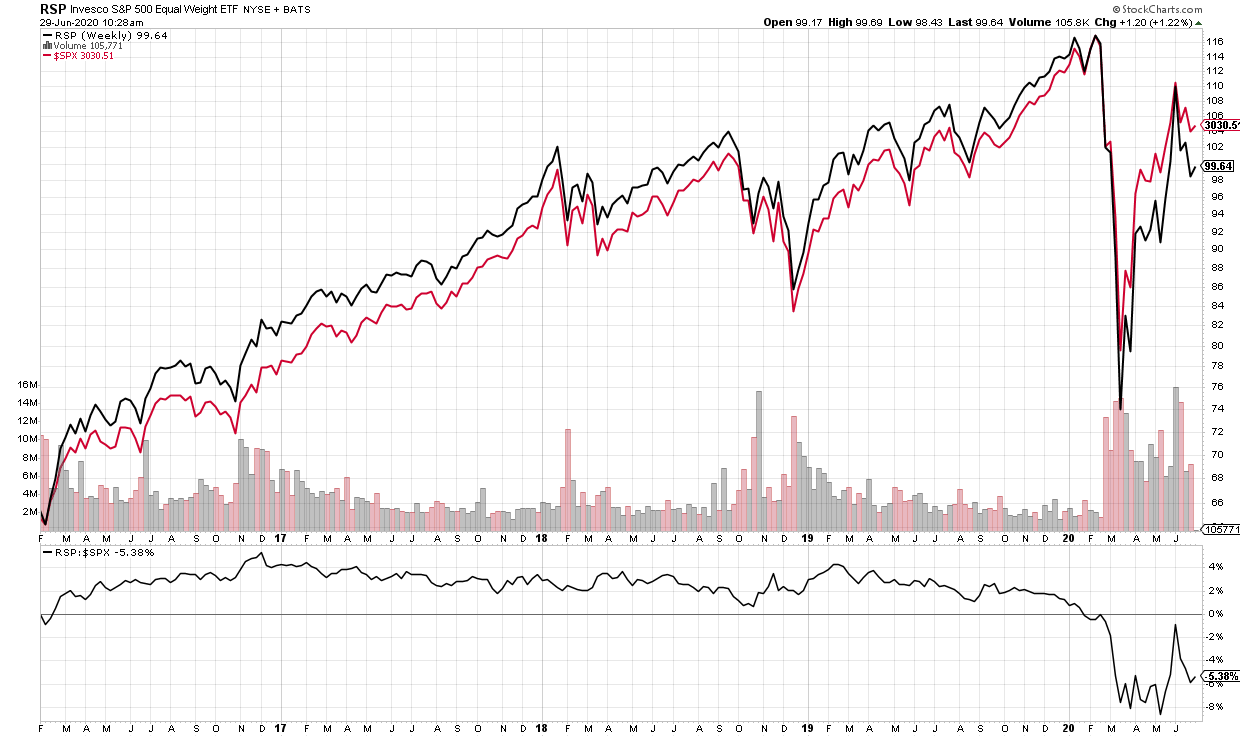 Horizons used to offer and equal weight TSX 60 ETF. But its no longer trading. If anyone knows of a similar product for the TSX 300 or 60 (equal weight index ETF) please let me know. I’ll be happy to update this blog with a similar comparison study.