I still see a solid year for the global markets in 2021, but a lot of love is now priced-in. Markets are pulling forward future gains, as indicated by this weeks WAY overbought sentiment, breadth-momentum and price momentum indicators (not shown). This is an overbought market – full stop. For this reason, we just sold a bit of equity to raise our cash levels back to about 13% (we were almost fully invested in our Equity Platform last week). Still, I see great value in some sectors, including oil.

Up until recently, oil was getting no respect (aka Rodney Dangerfield’s famous tagline). Here’s a joke that I saw on the internet reflecting that sentiment:

Receptionist: “Good evening and welcome sir! Would you like to try our Aromatherapy oil massage with lavender and chamomile?”

Customer: “How much does it cost?”

Customer: “That’s very expensive for me. Do you have something cheaper?”

Receptionist: “We do have a massage for our budget conscious customers at just $80 for a half liter of organic coconut oil”

Customer: “Uhh… Do you have something cheaper?”

The receptionist thought for a while and said: “Well,  a crude oil massage is only $46/ barrel”

Below is a weekly a chart of WTI oil going back to 2011. Over the years, I’ve marked various technical resistance and support levels that might represent targets. As you will see, there are price clusters representing target points at $50 (just coming up), then $65, and then $85. The final stop might be $110 at the top of the old trading range…but that’s probably a bit too optimistic given the whole “green deal” drive of late. Still, I do feel that if the market can get through $50, we could see $85 or close to it by the end of 2021. That’d be nearly double from current levels.

In the near-term, you will note that stochastics is a bit overbought, so you could see some pause or small pullback soon. But the bigger indicators such as MACD, which came off of a mega-low point similar to the post-oil-crash low of 2015, suggest more upside beyond a neartermed correction. Moneyflow is generally bullish, and moneyflow momentum (top pane) is coming off of a low point again. All good news. 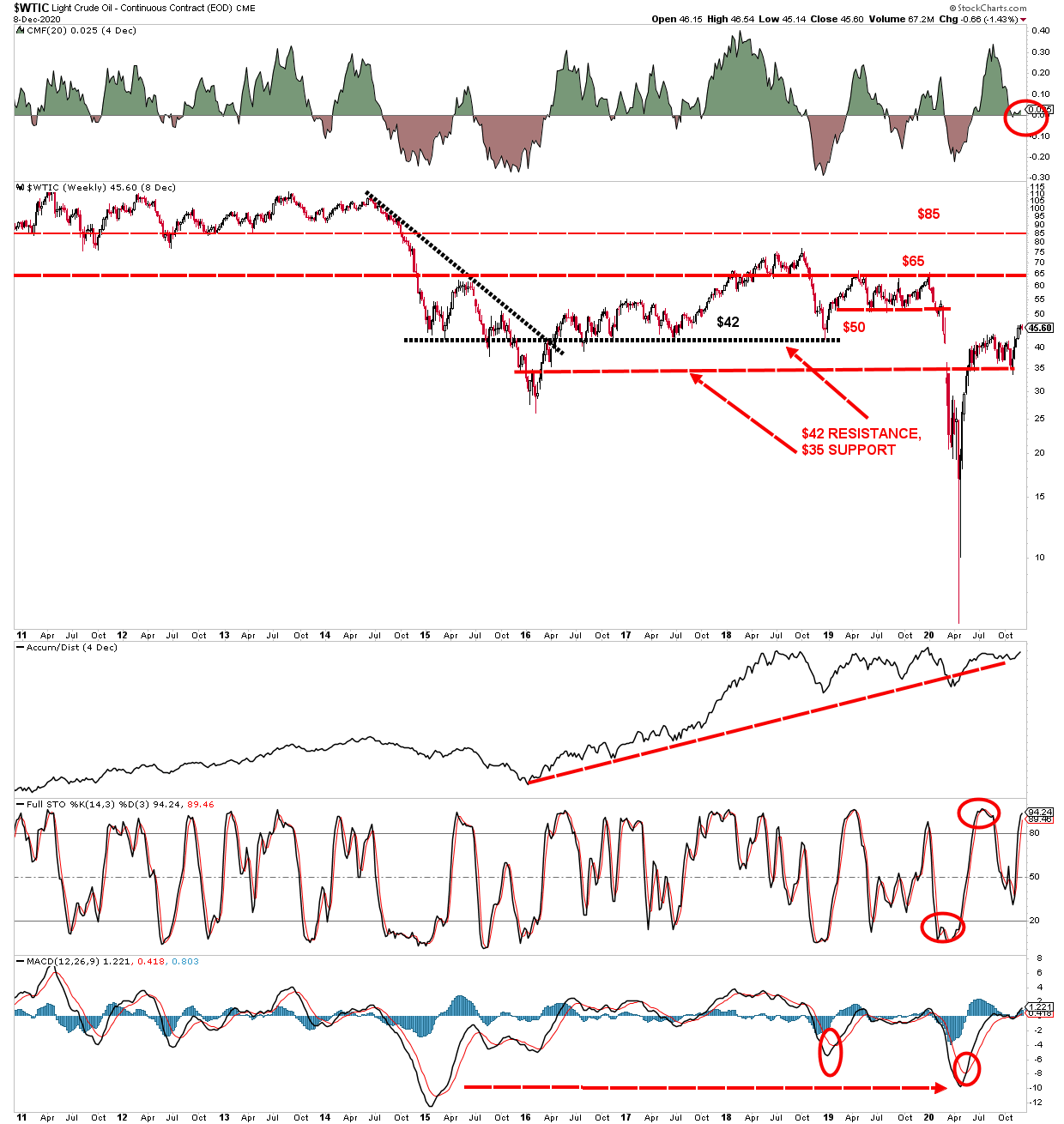 Now lets look at the energy producers. Below is a weekly chart of the iShares Energy ETF (XEG-T). It goes back to 2011 as well. The chart suggests that we are at first resistance near $7 for this ETF. Then we have $7.50, and ultimately $12. Like crude oil, I won’t hold my breath hoping for a return to the 2014 high zone near $18. But a move approaching $12 might be realistic, and that’s a near double. Do note the overbought stochastics and RSI indicators suggesting neartermed volatility – but MACD, as with crude oil, is bullishly rising off of an extreme low. Interestingly, moneyflow is bearish (bottom pane), but the top pane for moneyflow momentum suggests a bullish blast through the 0 line may be pending. 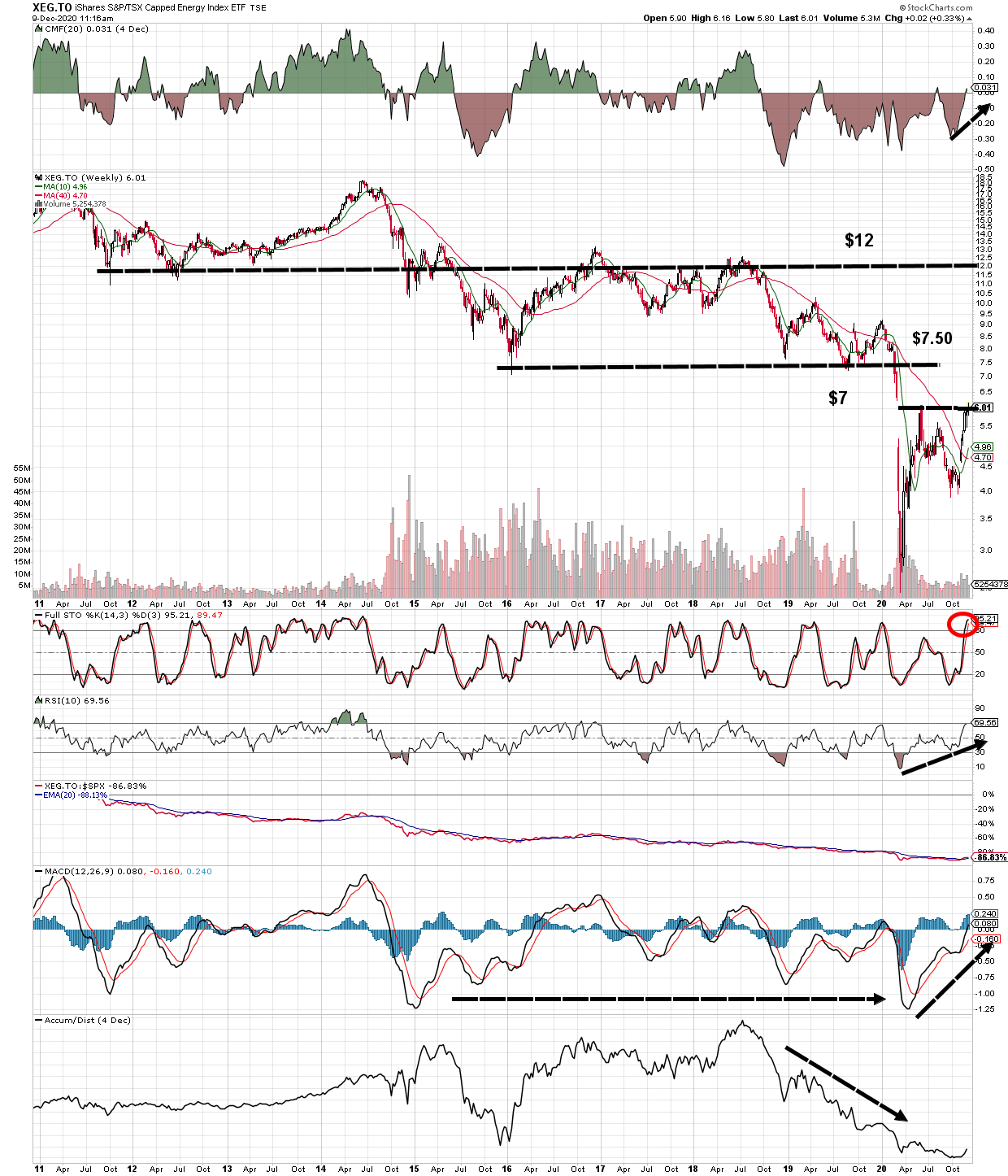 1. Supply destruction at both the short and long cycle
2. Demand growth increasing via vaccine announcements (2 this month)
3. Potential funds flow from growth to value trade and
4. Bottom of cycle valuations.

One of the best ways to play this out with the least risk comes in owning the super majors who are not spending on the long cycle economics (destroying short-term returns) but will have their value bolstered as prices start to rise via comments above. The flight to liquidity and quality along with the sheer size of the resource they carry should see that group move up quite nicely. For investors will to take on high, levered equity risk, we see upwards of 100-200% returns in the E&P sector just getting them back to their average historic valuations assuming $55 – $65 WTI outlook come mid-next year. This is very compelling especially in Canada because of the focus on low declining heavy oil and gas vs. the U.S. producer which has more exposure to lighter high decline oil. The silent killer is demand, and there’s a clear near-term problem brewing. Everybody wants to vilify supply while demand goes unabated. That tension can not last. We could have an energy crisis on our hands in late 2021, early 2022.