On my last blog, I noted some of the reasons why the markets might take a breather over the next two months.

Today, I read another potential reason why the market might struggle over the near term. According to sentimentrader, markets tend to do well immediately after a period of below average earnings –ie, where the market has less earnings “beats”. Conversely,  markets tend to do poorly immediately after a quarter of higher than average “beats”! For their study, they defined “above average beats” as those periods that were 10% over the 200 day SMA, and “below average” as 10% below the 200 day SMA.

Below is a chart, courtesy of sentimentrader, showing us that the average return following a higher than normal “beat” season is -0.7% one month after the first 10 days of quarterly numbers come in – after an S&P 500 winning quarter for earnings. Of note, the recent earnings season hit the highest % beats for the recent quarter in 25 years. 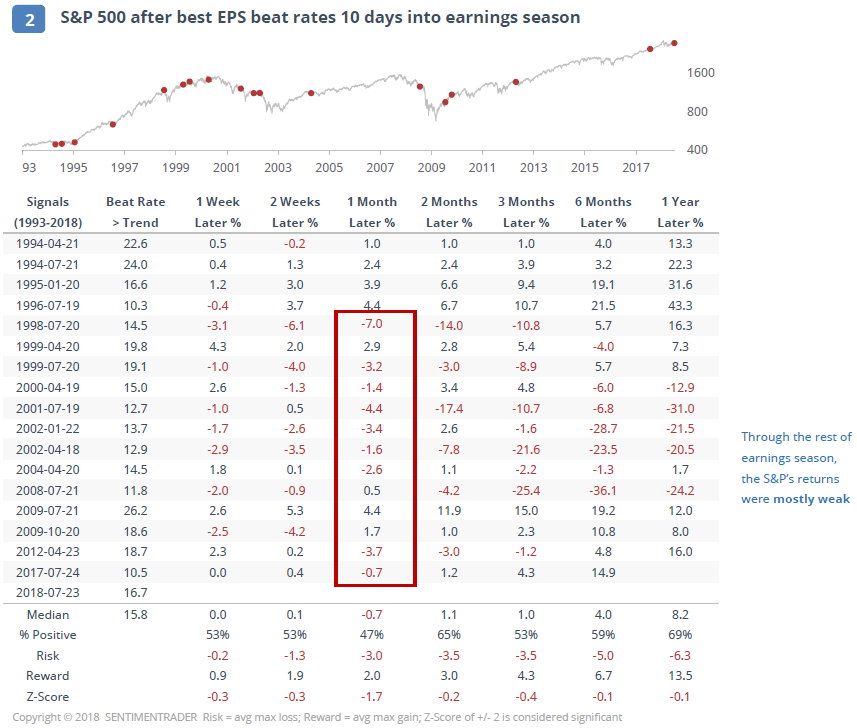 As you’ll note on the chart, there’s an awful lot of red in the one-month column following an above average period of earnings beats. To quote Jason Goepfert of sentimentrader,“While the media loves to cite good earnings as a catalyst for rising stocks, that is just assigning a narrative to an event that has little basis in fact.” My take on this – which may be wrong – is that when you have above normal earnings beats, its baked into the price and perhaps perceived by investors as a regression from the mean, which should be corrected to the downside. When you have below average earnings beats, that’s a possible sign of a regression from the mean that could be corrected to the upside. Sell on news, as they say!

“While the media loves to cite good earnings as a catalyst for rising stocks, that is just assigning a narrative to an event that has little basis in fact.”

Given that this one was an especially good quarter for earnings -we might want to pay attention to this statistic. Tying into the seasonal and chart patten observations on my blog reverenced above, there may be further cause for near termed caution for the balance of the summer.

It appears that two famous rock star names will be at the MoneyShow this year. Keith Richards (the Rock Star of Technical Analysis, as BNN once called him), and Gene Simmons – International Rock Star and founder of KISS. Note that Keith is speaking on Friday Sep. 14 at 4:15pm. Here’s the link.