Below is a chart, courtesy of www.sentimentrader.com, representing the optimism levels of “Smart Money”—that is, sophisticated traders such as commercial hedgers, institutional managers etc – vs. “Dumb Money” optimism – mainly small traders and mutual fund buyers. The theory, which I’ve found is fairly accurate, suggests that when Smart and Dumb money are simultaneously at extreme views in optimism (or pessimism)- this gives us a heads up for major market movements. I covered this indicator as one of my major market timing factors in my August 26th blog.

As noted on my August 26th blog—Smart/Dumb Money sentiment – and other factors – had moved into a bullish scenario. That gave us a heads up that a buying opportunity would come soon. I felt a likely bottom for the market would take place at or near the end of September. It did. 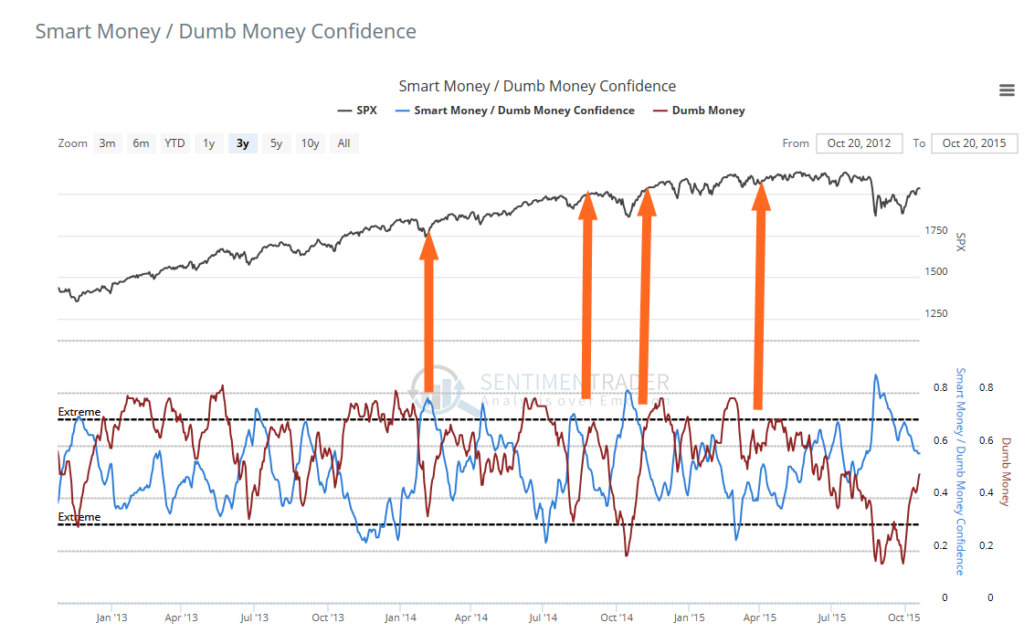 Back in April, I used this same indicator and the others noted in August on a  blog called Storms a’ comin’. April’s blog  noted a bearish Smart/Dumb Money sentiment reading in March, along with bearish readings on the other indicators that I follow- here is the blog from April

What is this indicator telling us now?

Right now, Smart/Dumb Money sentiment is neutral. Sentimentrader’s indicator shows us that Smart Money is returning to “neutral” confidence (falling)- while Dumb Money also moves into “neutral” territory (climbing). In other words, levels are no longer extremely bullish, as they were in August, or extremely bearish, as they were in March/April. I drew arrows on sentimentrader’s chart above showing what happened during periods where Smart Money confidence declined to neutral  from optimistic, while Dumb Money confidence grew to neutral from pessimistic. As you will see, this occurrence, at least in the past few years (and further back too, although chart detail gets too hard to read on a longer chart) typically signals reasonably bullish conditions.

So—this, and other factors, suggest that the market remains a reasonably safe bet for the time being. Times change though. I’ll keep posting my two cents worth as markets give us the signals in the coming weeks and months.

Please come out and join me – I really enjoy meeting readers of this blog at my speaking engagements. Here is the link for the details