Home / Dumb is as dumb does

Dumb is as dumb does

I gained a reputation of being a contrarian investor after selling out of my income trust positions in mid-2006. This was right in the heat of the income trust bubble, where conservative investors were buying these securities and, at the time, earning 8-10% yields plus significant capital appreciation. At the time, nobody seemed to be aware of the risk associated with these vehicles. I lost a client in the summer of 2006 because I insisted she keep the bonds that I had bought for her accounts.  Further, I  refused to buy income trusts for her, given that I was selling them for other clients. She left for another Advisor who promised to buy her a quality portfolio of these securities, where she could expect to double her yield over the bonds she held, and earn capital gains to boot. You may recall the Finance Minister’s drastic change to the tax treatment of the trusts by the fall of 2006 – which inspired a massive selloff of the income trust market. My client, who was a widow living off of her portfolio, could not have chosen worse time to sell her bonds and buy income trusts.

Similarly, in 2007-early 2008, I drastically reduced my exposure to the energy sector. I recall at the time that everyone spoke of “peak oil theory”, which promoted the ideal of higher oil prices for years to come as oil production peaks. Maclean’s magazine wrote an article near the end of 2007 giving an argument for $200/barrel oil. Again, I lost a client who transferred to an Advisor who was willing to load this client up with stocks like Suncor and Canadian Oil Sands. At the time, oil was about $130/barrel. It did peak at $147 by June 2008, before falling to $30 in less than a year. I re-bought energy in the summer of 2009 around $40/barrel – contrarian like.

My tendency to sometimes invest from a contrarian viewpoint comes from my deeply held belief in the predictive capabilities of sentiment studies. Sentiment studies, in their essence, suggest that the unsophisticated “crowd” tends to be wrong at market extremes.  Meanwhile, a minority of sophisticated investors tend to be correct with their investment positions at market extremes.

To illustrate the essence of dumb vs. smart money, one can examine the behavioral patterns of small children – and even your pet dog. One of the signs of an intelligent dog is the dogs ability to learn from its mistakes. Dumb dogs repeat their errors, while smart dogs don’t repeat them. My breed of choice is bullmastiffs. The male of this species grow anywhere from 130 lbs to 160lbs. One puppy (weighing about 100 lbs at the time) stuck his head in our dishwasher. He was enticed by the smell of food on the dirty plates. His collar got stuck on one of those sticks that hold your plates in place in the bottom tray. In a panic, he retreated from the dishwasher, but the tray followed him. The dog attempted to run from the tray, which of course stayed with him, spewing plates and cutlery throughout the house. We eventually managed to get ahold of the puppy and free his collar. After that episode, to his dying day, he wouldn’t go near the dishwasher. He learned from his mistake. Similarly, small children, when touching a hot stove, are not likely to repeat the mistake. Small children have enough sense not to touch the hot stove again, after experiencing the consequences of doing so once. Dogs and toddlers usually learn from their mistakes. 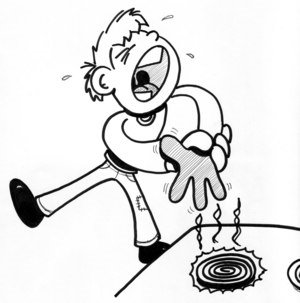 Right now, dumb money is piling into the market. Yesterday, I saw a sign outside the office of a “financial planner” asking would-be mutual fund investors “Are you positioned to take advantage of U.S. Growth?”. These mutual fund advisors and their investors, who have touched the hot stove before, are yet again being drawn to the like moths to the red surface. They believe that this time, it wont be hot. They have shorter memory spans than my old bullmastiff puppy.

This week’s chart, courtesy of www.sentimentrader.com, shows that dumb money is buying. Meanwhile, the smart money is selling. Commercial hedgers are net short the S&P 500, and insiders are selling Note how the selling spikes of smart money line up with buying activity of dumb money at or near market peaks. While the smart/dumb money levels are not at extremes, they are getting there. As an aside, commercial hedgers are also now buying the long treasury bond – an interesting development, given the crowd’s current belief of a pending crash for the bond market.

Sentiment indicators such as dumb/smart money do not offer short termed market timing signals. Instead, they offer a heads-up of the potential for a market correction in the coming weeks or months. In combination with the seasonal tendencies for markets to peak in April, I have reduced my exposure to the stock market. I do expect that a correction is pending, although the degree of this correction may not be more than a traditional seasonal pullback. I intend to reinvest my cash into quality positions when the time looks right. For now, I am following the smart money by holding some cash. 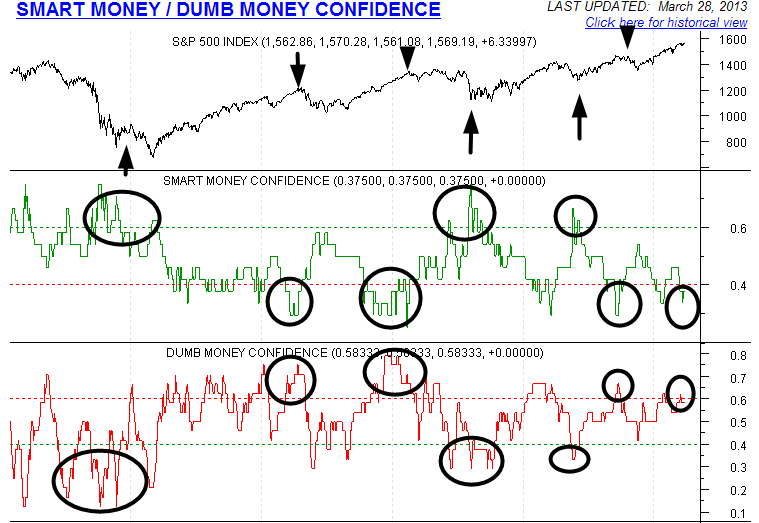 Tune in to BNN next Friday April 5th to catch me live on BNN’s 6:00 pm call-in show.