Home / Downside protection for your portfolio is cheap

Downside protection for your portfolio is cheap

“Don’t fight the Fed” is an old saying with a whole lot of truth to it. As noted in my last blog, its been a fact of life since 2008 that whenever the US Federal Reserve introduces a stimulation package, markets rise. When that package ends with no new package announced, the market falls. See the chart in my last blog here. Given that reality, it would be foolish to bet against the market right now. After all, there are stimulation packages and monetary policies being sprinkled around like confetti at a wedding.  However, there are some factors to consider that could change the market’s direction at some point.

“Never, EVER invest in the present. It doesn’t matter what a company is earning, what they have earned. You must visualize the situation 18 months from now, and whatever that is, that’s where the price will be, not where it is today.” Stan Druckenmiller

Using this advice of investment legend Stan Druckenmiller, lets look at the factors behind the current strong market returns:

The market is demonstrating a parabolic pattern which takes the post-delta virus revival and stimulation packages (now and future).  Historically, parabolic moves don’t last forever. The longer they do last, the worse the correction is. In my last blog, I highlighted the 5-year parabolic move of the 1990’s and the similar parabolic move into 2007. Both endings were ugly. Shorter termed parabolic moves that correct themselves are less violent. The 1-year chart below illustrates steep angled ascents (pink lines) and their corrections (green boxes). The strong rally in July created a parabolic mini-pattern similar to many of these moves over the past year(s). This implies a potential pullback is pending, if history is a guide. But, it could last a little longer.

Either way, parabolic markets simply do not last forever. If the market has baked the good news of the post-virus revival in – a correction may occur. If it occurs soon, that is good news.

The market has discounted inflation assets after their initial run. The market is buying into a “transitory inflation” argument. This despite the fact that one of the most important inflationary factors: wage inflation: is not going away. Once you give an employee a raise, its hard to bring that wage down later. And if inflation hits, the fed might be forced to fight it with a reversal in its easy money policies. We shall see. 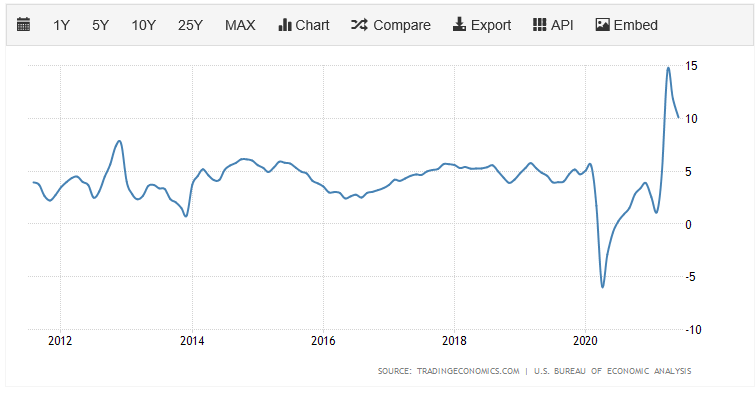 Further, the Democrats (tax n’ spend people) are back in office with long awaited control of the senate. I’m going to quote Larry McDonald of BearTraps:

For a decade – Obama – Biden, Rice, and Co. have been waiting for revenge, to right this (what they passionately believe is ) wrong, they only have a short window to go BIG on fiscal, and they will do everything in their power to do so. But, what is a threat to stop them? Above all it’s inflation. Thus, there is an army of White House WH-friendly academics (White House talking heads) who have impressive influence over much of the media messaging. There is a constant sales pitch, loud and clear, “transitory inflation” – just look at Jason Furman’s tweet stream, Austan Dean Goolsbee is better. We believe this powerful influence has spilled over into markets, there are trillions ($17T NDX 100) of dollars still in growth (tech stocks), comforted by transitory Inflation messaging. Our point is simple, there is a HIGH incentive for anyone close to the WH to get out there and sell, and sell hard transitory inflation for the next 4 months.

All of this implies that hard assets may continue to be expensive- well beyond the supply chain resolution. Further, we may be due for a commodity boom cycle (see the long termed cyclical pattern of commodity boom and bust patterns below). I didn’t create this chart, but many analysts have recreated this same pattern regarding the broad commodity patterns – something I was introduced to earlier in my career. I am not sure who to credit for this one. 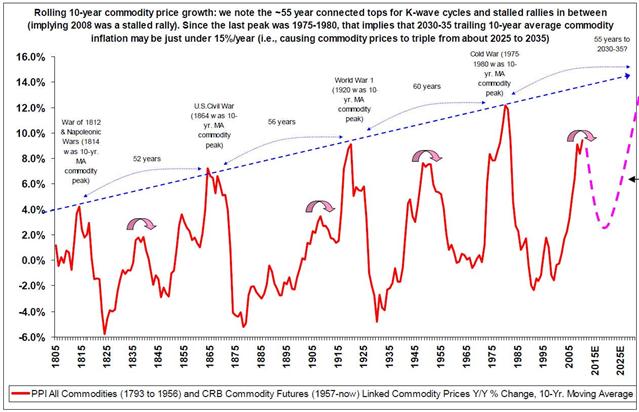 Despite the current Fed stimulation, short termed aggressive investors might consider hedging at least some of the risk in ones portfolio “just in case”. The market is priced to make risk protection, such as VIX, put/call and inverse/hedge securities cheap on a relative basis. The VXX Volatility ETN has now been red 7 days in a row. This is the longest stretch since the week after the US election. This market is getting complacent.

While my own way of doing things is to avoid buying the VIX type ETF’s as a hedge until it gets closer to 12-13, it certainly is in that ” complacency zone” of below 20 (see the chart below). Less aggressive hedging strategies discussed on past blogs might be considered for moderate positions in a portfolio- should you be concerned by this market apathy- to offset a portion of your portfolio. Longer termed investors should probably avoid these investments and “follow the Fed”. As noted at the opening of this blog – its hard to fight the Fed, and any correction will likely be moderate until they shut the party down. As such, hedging is best left for neartermed traders and aggressive investors at this juncture. 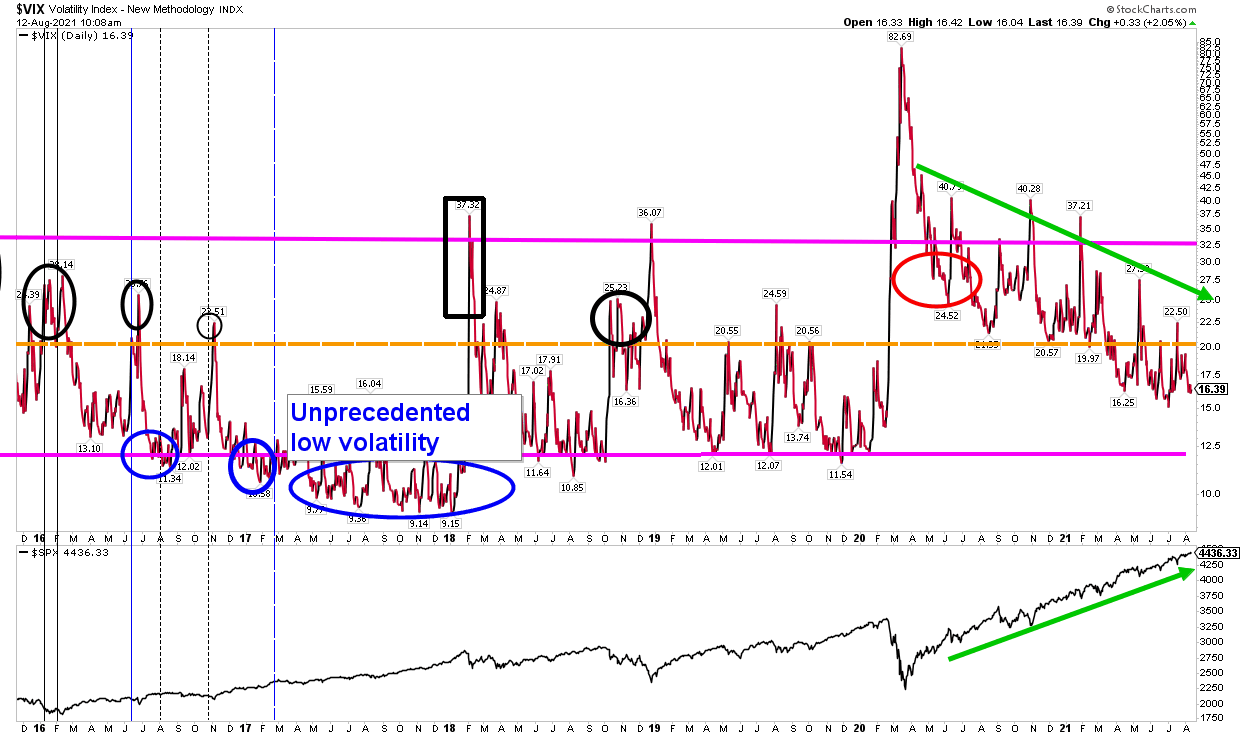