There are 6 tenets of Dow Theory- originally coined by Charles H. Dow (1851–1902), journalist, founder and first editor of The Wall Street Journal and co-founder of Dow Jones and Company. The first three tell us that the market discounts all known information, that there are three trends in a market (up, down, sideways) and that there are 3 phases illustrated via those trends (accumulation, participation, distribution). There are more elements to each part of those tenets, so read up on the subject for greater detail.   Three of the more important tenets of Dow Theory insofar as market analysis goes are the last three tenets. They  are (again, in a nutshell):

Let’s look at those three tenets applied to the Dow Indices:

In a nutshell, when the widely followed INDU indicator (DJ Industrials – above) rises to a new high, we need a similar move by the TRAN (DJ Transportations- below) to confirm the validity of a bull market. And vice versa in a bear. Charles Dow, through this tenet, was probably the first analyst to be concerned about market breadth – i.e. how well distributed, or concentrated, a market is in leadership. Below, the chart of the TRAN index shows a new high earlier this month. The TRAN index is well below its 2018 high. Non-confirmation of this manner is a problem for followers of the Dow Theory.

Volume must expand with the trend: FAIL

As we saw in my last blog, volume is NOT rising. You can see this on the INDU chart above.

Trends remain in place until they signal a change: ARGUABLE

As sports writer Dan Cook said regarding a baseball game..”It ain’t over until the fat lady sings”. The fat lady singing, in the concept of trend analysis, is a failure to put in a successive series of higher peaks & troughs (bull market) or lower peaks & troughs (bear market). When the succession of either peak-trough trending evidence ends, you enter into the “distribution” phase – according to Charles Dow. Technical people like myself, Stan Weinstein, and Ralph Acampora have added another phase to Dows work by calling one of the distribution phases a bottom, and one of them a top. Either way, you are either trending or going sideways according to Dow Theory.

Right now, the market has put in very marginal – almost non-material highs over that of the peak in May. But I would argue that those new highs look pretty lame. Especially because the high on INDU didn’t take out the one in October – see chart below (top pane is TRAN, lower pane is INDU). Meanwhile, there is no argument that December 24, 2018 saw a lower low. If you want to steadfastly argue that the high of a few days ago that took out May’s high was indeed significant, then you could argue that the low in early June took out the December low. So – it is not completely clear if we are in  a mega-long consolidation pattern.

As an aside…It might be argued that we are in a broadening pattern, although that pattern is more visible on the SPX.  I am not sure if Charles Dow had ever explored such patterns during his career. I explored that potential on this blog. 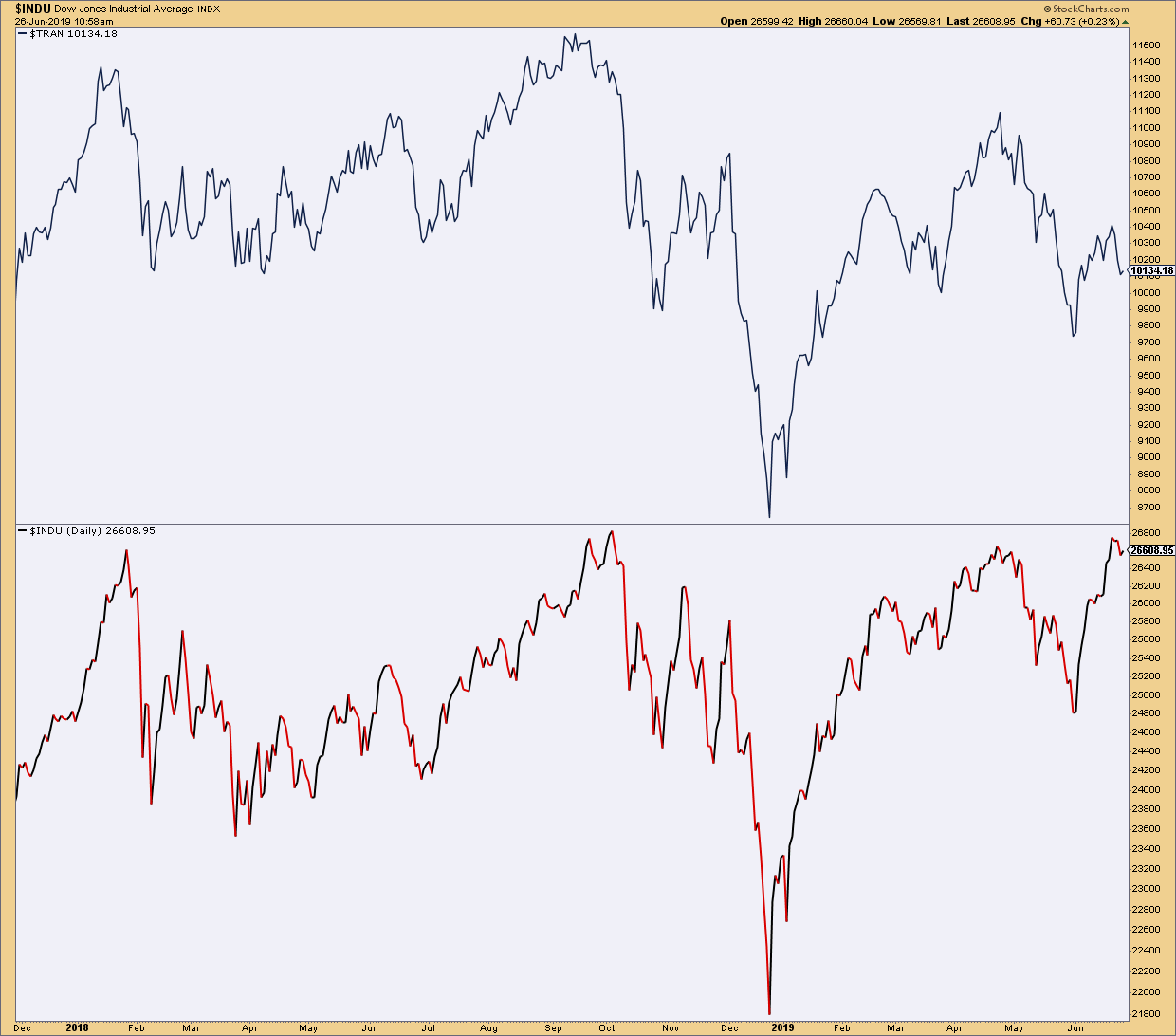 Transports have failed to confirm the new highs on the industrials. For that matter, the June high on the NASDAQ was not a new high, and the small caps are also below their former highs. But—staying true to the theory: Transports are the issue here, and they are not confirming the move by the Industrials. Volume, too, definitively fell while markets rose to the new high of a few days ago. So we have two of the three tenants inarguably failing. The third is arguable—as described above. All in, I think this review of the Dow Tenets adds further input to suggest that markets may continue to be range bound over the summer. A “real” break of about 3% though a former high by the Dow that lasts at least 3 days  – which the recent high did not meet – will allow me to change that forecast. See my book Sideways for more on this “3 n’ 3” rule.