Dow Industrials outperformance – will it last?

A few things to address today including a look at our current strategy at ValueTrend. Then a look at the recent market rotation into industrials, followed by some insight on inflation predictions.  Finally, more intel on the energy trade I’ve been talking about lately. Lets get at it:

We are about to get a USA Fed policy update today at 2:00pm. The market is hoping to hear about a pivot (aka – outlook for less aggressive hiking). If that happens, it would probably push the market higher over the coming weeks – likely into year-end. But…. it all depends on the Fed’s message. We’ve played the recent rally a bit, but will not commit more until we see follow through (namely, a break through the 200 day SMA to start). If we get that break, we will leg more into the market.

“Investors are suddenly excited again about the resiliency of old-economy stocks, which should be a warning sign to those who pay attention to such things. Stocks like that typically can’t sustain high excitement levels for very long. While short-term returns after similar bursts tend to be poor, long-term ones tend to hold up well. However, the Dow has surged so much against the Nasdaq that the long-term relative value there is less defendable.” Sentimentrader.com

The chart below belies Sentimentrader’s concerns. It’s clear that the DJIA (black line) has massively outperformed the NAZ (red line) since the summer (see the comparative price study with my purple arrow). Some concerns of that spike being overbought include an early sign of the MACD rolling over for the DJIA – note the histogram is starting to decline, even though the MACD trigger lines are not. Also note that RSI has potentially begun a hook down.  This may or may not mean that we will see a pullback on the industrials and value in the near-term. Kinda looks like we’ve had a string of negative days this week – perhaps this is part that pullback. That can change to a more positive note with the Fedspeak today, though. Or, not. 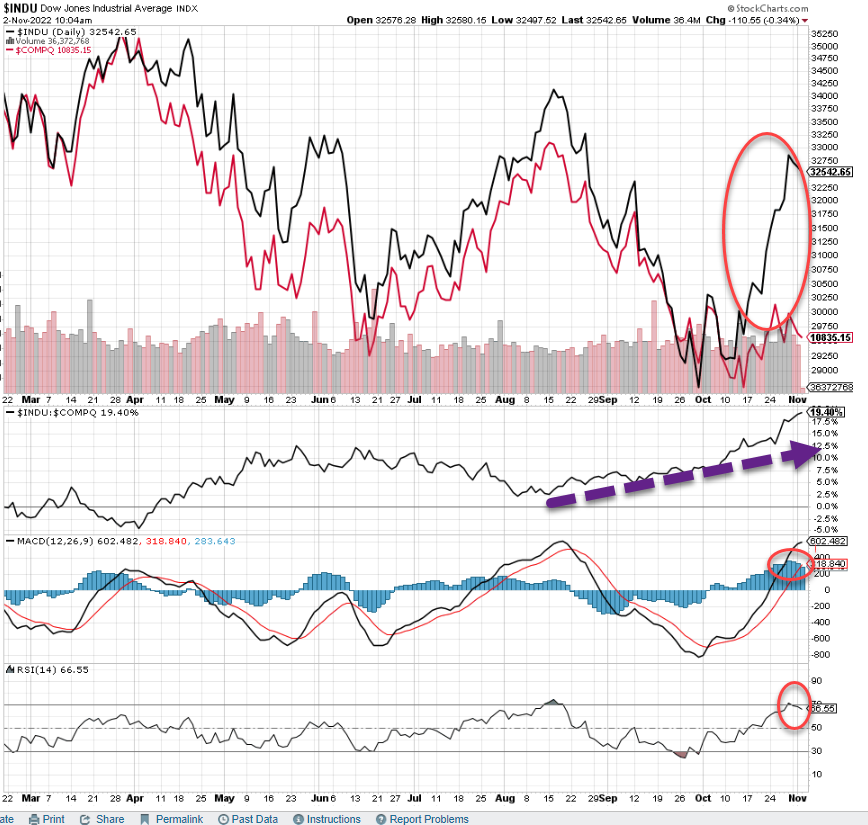 Never mind inflation…Make sure we don’t have a recession.

The BOC political decision to pivot on rate hikes, despite the absolutely clear-cut data showing Canada’s runaway inflation, was important. This decision, as noted in this blog, was at quite likely based on the fact that inflation is bad for the economy, but recession is bad for politicians hoping to be re-elected. Guess which matters most to already unpopular governments like Trudeau and Biden? The problem with the “recession for inflation trade”, which looks to be implemented in the USA as well (2024 Presidential election is around the corner) is this: Inflation, if not stopped hard and fast, becomes the proverbial runaway train. Perhaps it settles down from its peak levels – but it remains destructively high on a relative basis. Just ask Former Federal Reserve Chairman Paul Volker who presided over the last inflation train. Or Larry Summers, who recently notes the following:

“Never mind inflation…Make sure we don’t have a recession….Those with this view need to explain how visibly abandoning 2 percent target will play out. The only previous time we dedicated monetary policy dominantly to avoiding recession was the disastrous 1966 – 1981 period. History suggests that once generated, high inflation is very hard to stop. The vast majority of efforts to stop inflation have failed in industrial countries.” – Larry Summers (Former US Secretary Treasurer, Renowned economist)

Below is the track record of inflation forecasts (red lines) vs Headline & Core CPI in the USA. Consistently bad forecasts with lower inflation guidance bias. 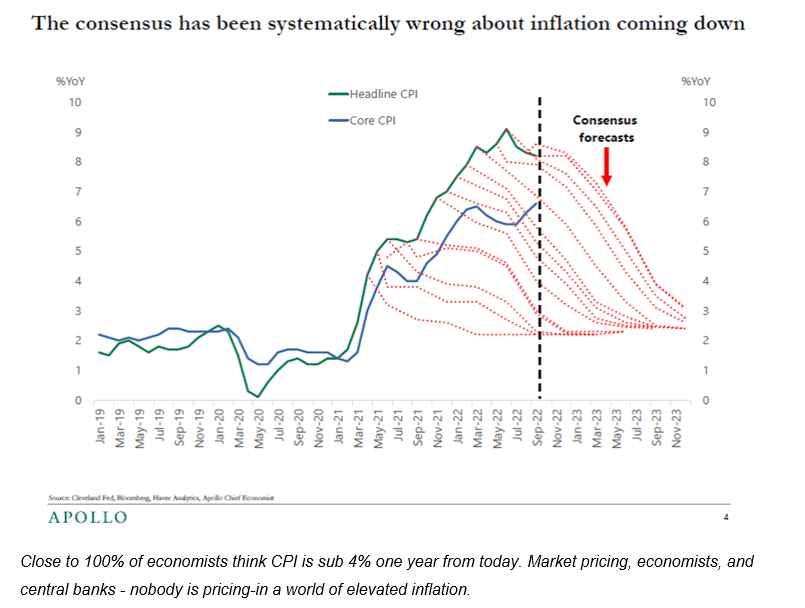 More on the energy trade

“The President doesn’t determine taxes, its Congress that does and they would never pass such a windfall tax. I wouldn’t put it past them for publicly saying it into elections but it not going through. I have it on good authority that Biden sincerely tried to stop exports of crude to lower prices here. It didn’t happen because 1) refineries are at capacity so it wouldn’t have the effect they wanted and 2) they learned they can’t just ban the export of crude when you promise to backstop our allies in Europe and LatAm.” – Unnamed Market Analyst quoted in BearTraps

My take: this is political rhetoric by Biden to help with Democrat midterm votes. IMO, it will not kibosh the case for energy & producers in 2023. However, it is interesting that Biden didn’t elect to threaten tax windfall profits on big tech after massive profits from COVID lockdowns, nor did on tax big pharma after big COVID profits. Perhaps this ties into the rhetoric that it wasn’t his ESG policies making oil prices so high. It was those greedy oil companies. Oh, and the war in Ukraine, too, don’t ya know.

Nothing we can do about prior bad energy policy decisions. But, it does mean: Much more catchup to do for energy production. Meanwhile, the Ukraine conflict rages on, the USA will be refilling their SPR’s early in 2023, and Saudi Arabia is peeved enough with Biden to refuse to increase their production, stating: “It is my profound duty to make it clear to the world that losing emergency stock may become painful in the months to come. Running out of capacity has a much dearer cost than what people can imagine.”

I continue to look for higher energy prices in the New Year. Opportunities may be appearing. Keep an eye!