Don’t get too excited about the strength in the loonie

Let’s start out this blog with my concluding statement. That is, the recent rise in the loonie will likely not last for too much longer. Here’s why:

I think that this chart tells the story. The loonie is in a dominant downtrend. During any downtrend, including this one, you get counter – trend movements (i.e. upswings). You’d need a pretty significant pop on the loonie to break the current downtrend. The CDN $ will need to break the last high of $0.76 USD and then take out the last major high of ) $0.79 USD  to qualify for my trend change rule of “a high that takes out the last prior high”. It would have to stay above that major high, and above the 200 day MA for 3 weeks to tweak my interest. Bottom line- this chart tells us that – at this point – the trend is not your friend if you are long the loonie.

Now let’s look at the near termed picture. After applying my neartermed timing chart – I noted that the loonie is well over its upper Bollinger Band, and is into the overbought zones on both the RSI (intermediate termed) and stochastics (neartermed) momentum indicators. Neither has hooked down. It’s inevitable when you get a high reading on these indicators that you will get a neartermed pullback sooner rather than later. 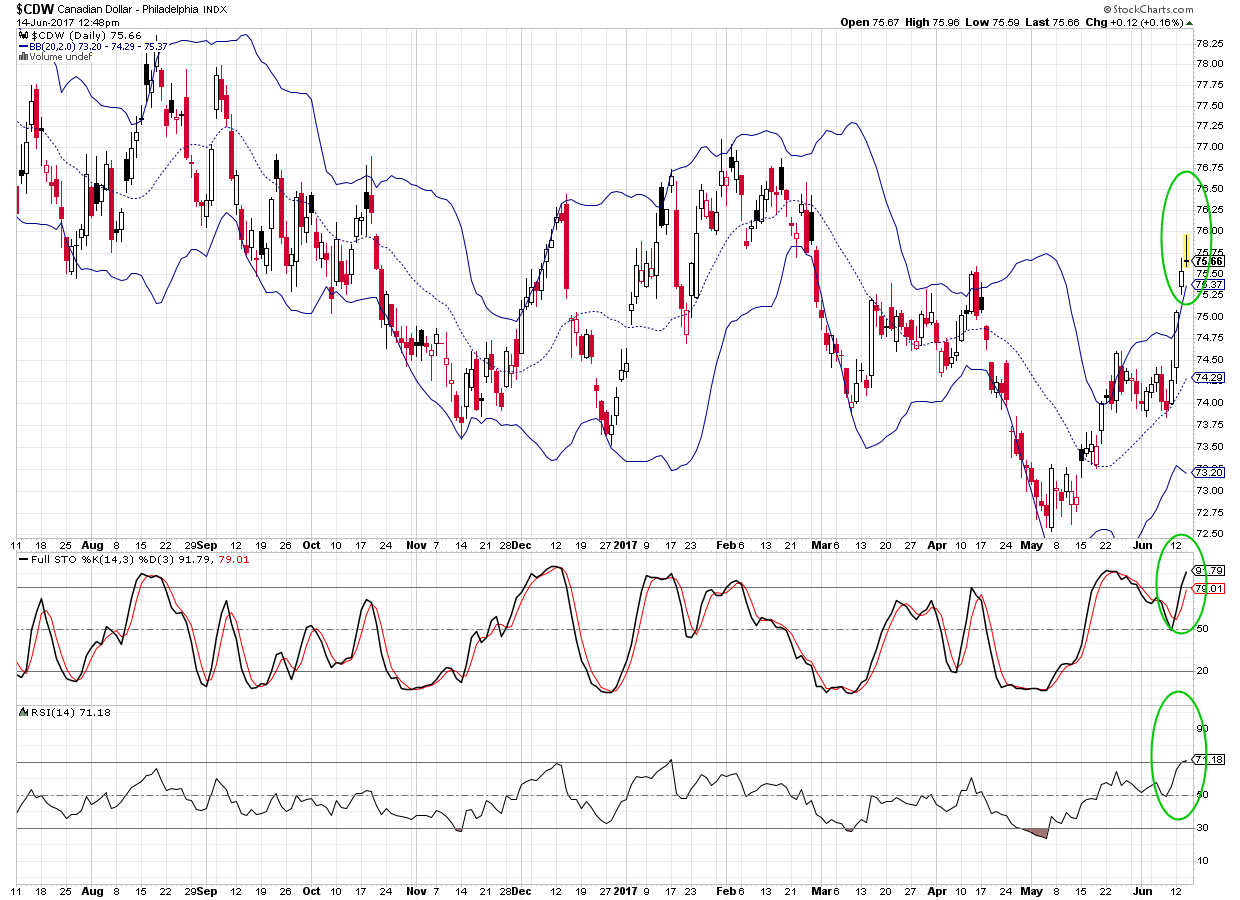 A range bound price for oil

Until oil breaks out of its rather contained $42-$55 range, we shouldn’t expect too much out of the loonie. As I’ve noted in past blogs, the relationship is tight. See the chart on the bottom of this blog

There is no doubt in my mind that oil will break out eventually—but it may be a few years. Whatever the time it takes, that day is not here yet.

“The danger in the current climate is that we (Canada) focus on wealth distribution and not wealth creation. Both are absolutely critical, but without growth we will have no wealth created to fairly distribute.”

Canadians and Canadian businesses who create the wealth, create the jobs, and thus create GDP are being pressured through higher taxes, changes to the employment act, increasing minimum wage (Ontario), and increasing public service costs. This is the essence of Mr. Jacques message, above.

Adding to the debt are unionized corporate bailouts and gifts to Ford, GM, and foreign country “gifts” (Africa and Italy most recently). US government and Boeing have legitimately expressed concerns re the recent Canadian taxpayer funded subsidies to Bombardier.

As Alexandre Laurin Research Director of CD Howe Institute said in an interview last year “Trudeau took out the credit card and spent. But is this really affordable? Its endless deficits. It’s probably not affordable. Something will have to be done at some point. The minister will have to put his credit card back in his pocket and start paying back. If there’s not a huge, surprising growth in the economy…then we will have to pay for this. How are we going to pay for this? Through tax increases and cuts in spending – spending we have become accustomed to. So it’s going to be painful”.

As I noted in a past blog, TD Bank has forecast that Ottawa Is headed for a $150B deficit over next 5 years! I’ve also quoted ACG Analytics Research and their bearish view on the Canadian markets here.

Non of these institutes are known to be extremists, nor are they considered overly politically polarized when presenting any countries outlook. I consider them fairly unbiased in their analysis towards our market. So its worth heeding their words.

It seems that at least one pickup truck driver in Barrie shares a similar view, but puts his / her concerns out there a little more bluntly:

Given the longer termed trend, the shorter termed technical picture, and the concerns of highly respected independent research firms like CD Howe Institute, TD Bank and ACG Analytics –I’d probably not bet the farm on an ongoing rally for the loonie.