Currently, gold is in the midst of forming a large symmetrical triangle. This type of triangle is a consolidation pattern that will, upon a breakout on either the upside or downside, provide some guidance as to what the next step for gold will be. An upside breakout would be considered a bullish sign, and a downside breakout from the triangle would be a negative. You can learn more about triangles by reading my book Sideways

You’ll also see on the chart that there is considerable resistance (dashed green line) in or around the high 1300’s. So a bullish breakout – should that happen – will need a break over that price – let’s say $1400 to be safe. Meanwhile, there are a few internal technical signs that we should note regarding gold – presented below. 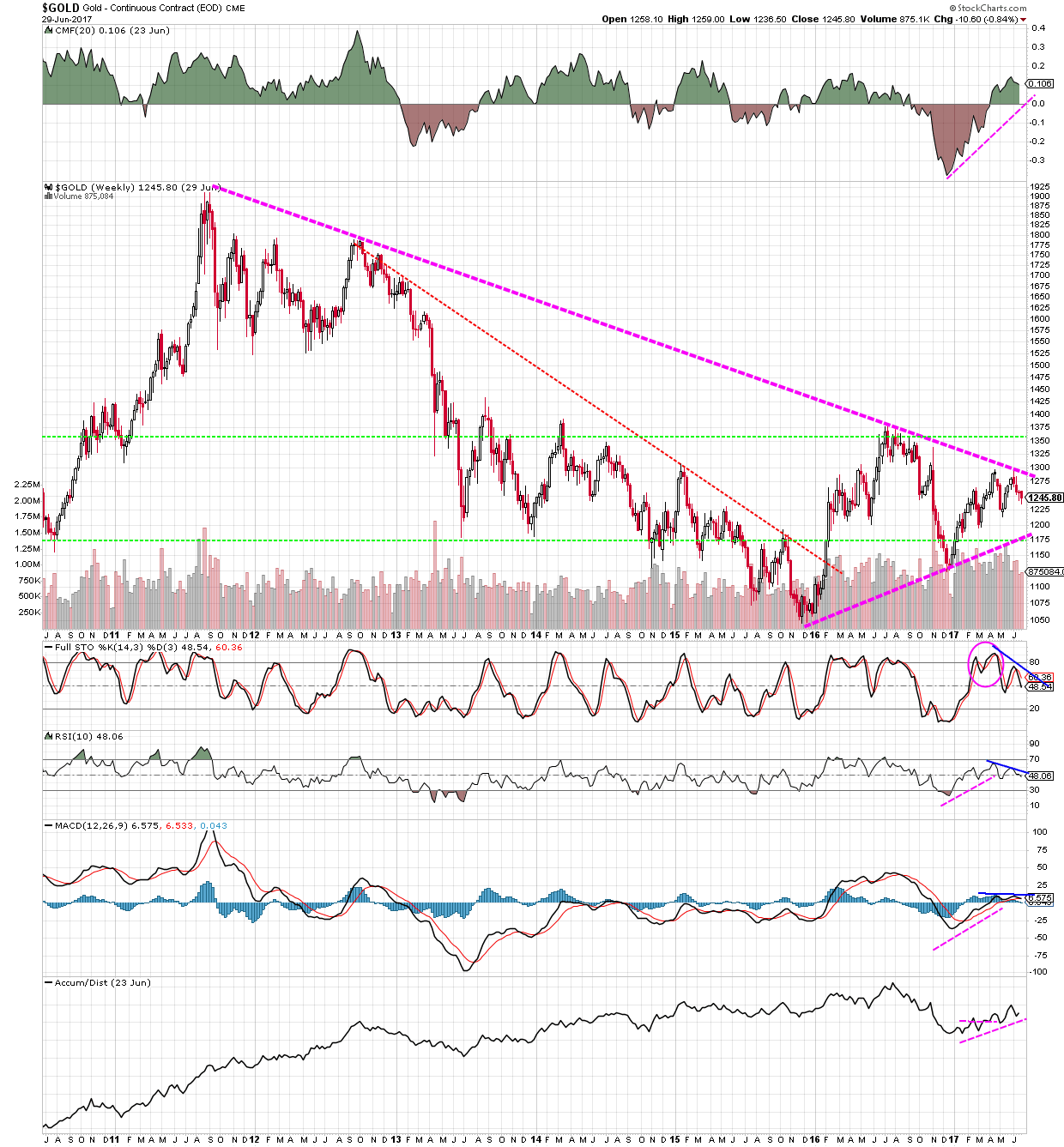 Positives: You’ll notice on the weekly chart that moneyflow – which is primarily represented via the bottom pane Cumulative Accumulation Distribution line  – is getting more positive. Meanwhile, moneyflow momentum (top pane) is growing. Rising moneyflow is a good sign of new interest in gold. Seasonality for gold is positive from July 12th to October 9th according to Thackray’s 2017 guide

Negatives: The main negative for gold is that of its primary trend. Gold has been in a primary downtrend (along with other commodities) since 2011. Need I emphasize that a primary trend is not something to bet against? Should the triangle noted on the chart break positively, that would carry gold out of its primary downtrend. But that hasn’t happened yet. Momentum studies Stochastics, RSI and MACD (first 3 panes under the price chart) are showing some stress. They are neartermed indicators that are best kept in perspective, but they are peeling back at this time. Meanwhile, MACD – the longest momentum indicator that I like to watch –  is starting to lose steam. Recall that MACD is a measurement of spread between a faster and slower moving average. As such, it tends to be a little longer termed in perspective. So we should keep an eye on it in particular.

“Beer..is there anything it can’t do?”

I probably won’t be able to post your comments during the week – my apologies. Back on the 10th.

This is the only blog of this week, as I am at the cottage for the week. There may be beer involved.