Home / Does the market climb a “wall of worry”?

Does the market climb a “wall of worry”? 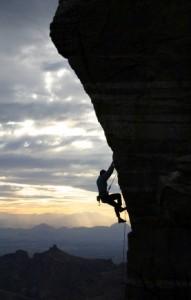 The theory that stocks “climb a wall of worry” sounds good, but practical observation suggests that the theory is largely incorrect. If you’ve been following this blog for a while, you are likely aware that I am a big believer in sentiment studies. In fact, I wrote my research thesis on using sentiment indicators in combination with momentum indicators to predict market turning points. So, if I like using sentiment indicators so much (which tend to signal “buy” when pessimism rises, and “sell” when optimism rises), am I contradicting myself to say the market doesn’t climb a wall of worry?

The fact is, stocks rise when investors become more and more bullish, and they fall when investors become more and more bearish. Declining optimism is a bad thing for stocks, until it gets to a point where optimism is at an extreme level. When stock investors reach a level where they are “too bullish” or “too bearish”, only then do stocks reach turning points. Sentiment is a little like momentum—if levels get too far away from the historic average levels, it tends to regress back to the normal level. This typically coincides with the market rising or falling from its respected overbought or oversold levels in similar fashion. SentimenTrader.com’s “Intermediate Term Sentiment Score” ranks a number of their sentiment studies as one overall indicator score. Several well known sentiment studies such as put/call ratio’s, insider trading ratios and various bullish/bearish consensus indicators are tallied into this sentiment index. Currently, the S&P is close to a 52-week high, but the Intermediate Term Sentiment Score is near the lower end of its range. In fact, it continues to move lower even as stocks move higher. This coincides with an Investors Intelligence report (www.investorsintelligence.com) showing that more investors are moving out of stocks and into cash lately. Further,  falling volume patterns  also indicate lower participation by investors (see S&P chart below, note the slope of the 50 day MA and my trendline). 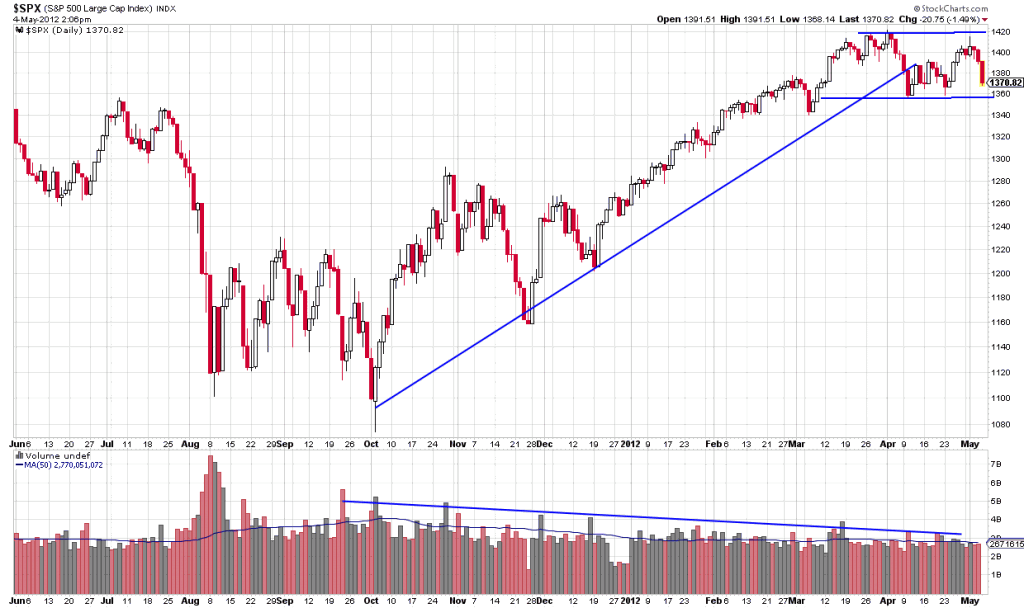 Again, these things are not typical for a rising market, and may lead us into some continued volatility. I’d encourage you to read last week’s post on market patterns surrounding the end of a Fed stimulation package where I forwarned readers of possible market choppyness.  All in, while there may not be a case for an outright bear market selloff, it would probably make sense that we’ll see some pretty choppy markets over the next few months. Low levels of investor participation as measured by sentiment and volume, combined with the end of a QE stimulus program, ongoing European woes and the seasonally weak trading period suggest it may be time for a break. The chart already indicates a failure to take out the early April highs – another sign of a potential consolidation pattern. Lastly, the contrarian in me wakes up when I hear so many market pundits suggest that the usual seasonal cycle for “sell in May” won’t work this year. That by itself may be the very reason we should expect it to work again!

I remain optimistic that the longer termed target for the S&P 500 could be 1550, but not before a sideways or corrective phase takes place this summer.

You can read my newest articles published in the Moneyletter and Investors Digest without having to have a paid subscription to those magazines. They’re available on my website at www.valuetrend.ca/?page_id=84