At ValueTrend, we utilize two distinct disciplines in our process. Foremost, we are macro-driven managers, meaning that we place great emphasis on some specific macro trend indicators that suggest whether general market conditions are higher or lower in risk at any time. As I’ve noted before—it’s all about probability and risk. It not about being absolutely sure about anything—that is, we don’t know for sure what is going to happen, but we do know how to measure the probabilities. Among those indicators are:

I’ve touched on some of the indicators I use to study the above factors in past blogs. Today, I want to focus on that most basic tool of technical analysis–the current macro trend – which is the most important factor I study. By looking at the chart below, you will see why I have been holding cash in the equity model, and why I went defensive in January – despite the seemingly wonderful rally seen in the past few weeks – and despite the normally positive seasonal factors for markets at this time of the year.

On the chart below, I’ve drawn the highs and lows and coinciding 200 day moving average breaks with arrows to show buy and sell signals since the 2008 crash. Note that ALL conditions (new low or new high AND a moving average break) must be met to signal a buy or sell. Note how the signals, while sometimes a bit whippy, saved our bacon (so to speak) in 2008, and got us in again later in 2009.

How this applies to today’s markets

The market moved back above its 200 day moving average in the fall of 2015. After holding cash raised over the spring, we went fully back into the market in October. By January (talk about a wild ride…) the market once again broke down through the moving average—AND it put in a lower low. We were forced to sell again–although not as aggressively (current cash is 35% vs. 52% last summer). Markets fell in January and the first half of February. Suddenly, it reversed and rallied – and has since then come right back to the 200 day moving average. The wild ride continues. 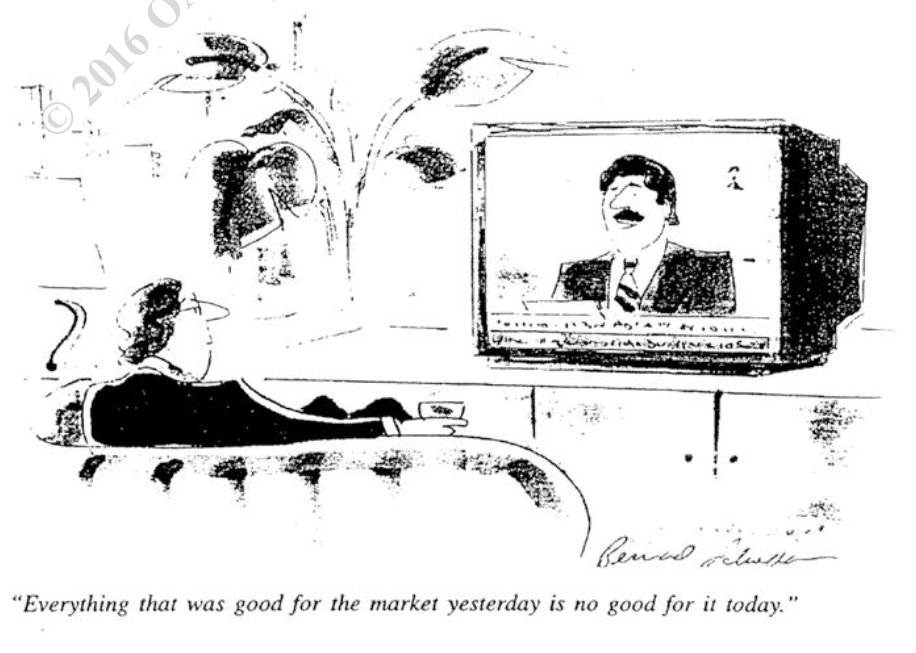 The market has NOT seen a higher high since last May. According to our trend rules: Officially, the market is now in a bear market until BOTH the 200 day MA is cracked (which is looking to be the case as I write this) AND a new high is achieved. So, despite the seemingly wonderful rally over the past few weeks, we should view the market as a shorter termed bull within an intermediate termed bear. The above conditions (break of the 200 day MA and a higher high) may occur in a week, a month, a year or a decade. That doesn’t matter. My rules, which you are free to dismiss, suggest holding some cash at this time.

“The future isn’t a predetermined scenario that’s sure to unfold, but rather a range of possibilities, any one of which may happen. Investors formulate opinions as to which of them will happen. Those opinions may be well-reasoned or dart throws. But even the most rigorously derived view of the future is far from sure to  be right. Many other things may happen instead.”