2012 was certainly a year of unknown political outcomes. Many events took place this year that just could not be predicted by technical or fundamental analytical techniques:

On each of these occasions, I felt myself reliving one of my favorite movie series from the 1970’s (I date myself by noting this). Clint Eastwood played the infamous “Dirty Harry” – a rogue cop who took the law into his own hands. Harry had a famous line he delivered, while pointing his Smith & Weston (“the most powerful handgun in the world”) at a villain. He explained to the villain that he couldn’t recall if he had any bullets left after their long shooting match. Should the bad guy make the wrong move, Harry would pull the trigger. He asked the villain a question: “Well, punk, do you feel lucky?”. Before each of these political events, I felt like the guy on the ground with Harry (the market) pointing the gun at my head. I’m feeling that way again with the cliff dilemma in right now. Do I feel lucky? My answer to that question right now is, um, yeah, sorta. As lucky as this great unknown will let me feel. I’m invested with only a bit of cash in my equity model as I write. 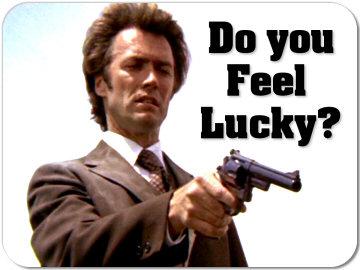 I tend to be a very conservative investor. As such, I don’t like to play the game when an event with outcomes that can’t be measured by traditional analysis is before me. For instance, with all things being equal, we can calculate the upside potential and downside risk on a stock like RIM or APPL, as I did on BNN last Thursday.

This summer, I chose to sit in 30% cash for much of the summer, and even hedged the equity portfolios I manage through VIX and short-type ETF’s. I did this coming into the EU Summit and US Fed meetings. As mentioned above, Harry’s gun may have been loaded. I didn’t want to try my luck. In hindsight, this neutral strategy wasn’t needed, and it cost me in missing some upside in June.

It’s an interesting dilemma, this risk-reduction stuff.  You can choose to preserve capital by hedging out risk, but the price paid is non-participation in the upside if you are wrong. I’ve been rewarded during the past 5 years by playing the cautious game, but this year it didn’t pay out. My managed equity account basically matched the TSX’s return for 2012. I note that a few of my Technical Analyst buddies are in similar situations.

Going forward, I can’t say that I would change my risk-adverse approach to the markets, despite the disappointment of losing out on some gains this past summer. If markets present potentially devastating political events that I cannot apply my risk/reward analysis to, I will likely play the safety game. However, I have learned that one can partially participate in an unforeseen “risk on” rally during these times by maintaining an exposure to lower beta sectors. Pipelines, utilities, that kind of stock can offer less risk during a market correction, yet offer some upside if markets rally. With this in mind, I’ve been a little more willing to keep more equity exposure into potentially dangerous events, so long as these positions display about half of the beta of the markets. Don’t get me wrong, as I still like holding cash coming into a pending disastrous situation-but the type of stocks that I remain holding have been more and more geared towards safety during such times.

I will present my usual sector analysis on December 27th. Please leave a comment if there are any sectors you’d like covered in my upcoming blogs.

All the best to you and your family in 2013. Thank you for reading my SmartBounce blog (now read by about 4000 people per month!) and I hope you continue to enjoy it in 2013.