Yesterday, the market staged a reversal day. Markets were down over 2% in the morning, and then around 11AM, reversed course to finish up at the close – by well over 2%. Why did this happen? The basic explanation is this: Equity volatility was extremely overbought.  Everyone in the trading world was hedged against the falling stock market. This all resulted in a massive short covering on the bearish CPI news. Wait…what did I just say? They covered their hedges on bad news? True, this may sound counter intuitive – but recall the traders iconic rule: “Buy on rumor, sell on news”. Traders covered their hedges, sold their VOL contracts, and the market reversed.

The case for a neartermed rally

Interestingly, Beartraps notes the following: “We are STILL inverted despite the short squeeze. Speaks to this rally having legs to the upside.” In plain language, BearTraps is saying that a fair number of traders are still long volatility, and hedging the market. More covering of that hedging would come as a result of any move up on the markets. This is known as a “short squeeze”. That squeeze becomes a self fulfilling prophesy – stocks are going up….because they are going up.

I wrote about the potential for a rally yesterday here. I noted that the SPX had neared the bottom of the trend channel along with oversold momentum. There is a very good case for yesterdays move to result in a move to the top of the channel, given that the low end of the day brought us pretty much exactly back to the channel bottom.  A move to the top of the channel could bring us to 4000-ish. See the chart below.  Note the hammer candle, and the touch of the trend channel bottom. This move may or may not be the end of the bear. I am not convinced it will be the end of the bear market – but I do believe that it may offer enough upside to trade.

“This was the 5th time in SPY’s history (since ’93) that it closed higher by at least 2% after opening down at least 2%. SPY fell the next day 3 of 4 times, but it was up over the next week and month all 4 times.”  Bespoke

My analysis of the trend channel, and the recent pattern for the VIX might agree with Bespoke. The range on the VIX over much of the past few years has been a fairly reliable pattern of a top (volatility high) near 34, and a bottom (volatility low) of 20. Given the above noted trend channel touch, and Bespoke’s observations, we could witness a decline in the VIX (volatility) and a pop on the markets that brings us back to the top channel line of about 4000. 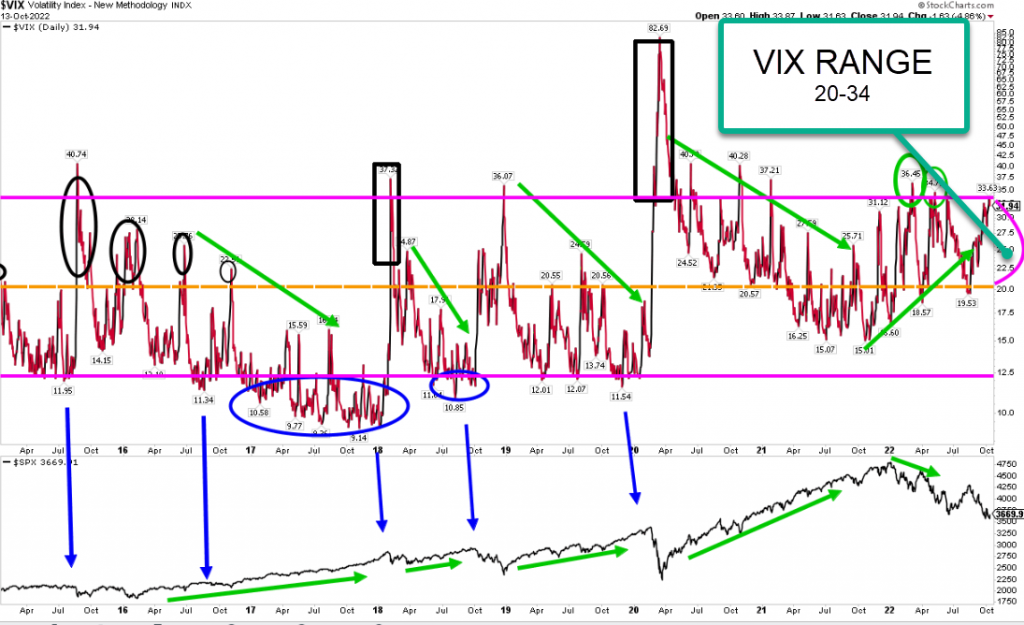 Short termed move or not, there are some bigger picture views I am keeping in my mind. Below is the 2000-2002 bear chart I posted on my last blog. Note that the market did stage a nice recovery (15%) in late 2001. It rose from about 990 to 1150. Nice! It then went on to bottom out below 800. Not nice! It was shock to market participants (including myself ) thinking that the bear was over. Personally, I learned from that – and vowed not to be fooled again. As such, I was more prepared for the 2008-9 bear, and the recent bear of 2022.

Here’s the chart of the 2008-2009 bear market. Note how the market declined harshly to about 750 in November 2008. It went on to rally about 25% into the 950 area. Nice! Like in 2001-2, the SPX proceeded to put in a new low around 650 in March of 2009. Not so nice! Like I noted above, I was not fooled by the prior rally and went on to hold my cash well into the early summer of that year. However, as noted in my opening comments, there were potential profits to be had by trading the rallies. I’ll confess that back in 2008-9, I was less inclined to trade rallies. Instead, I stuck to my trend trading rules, which you can learn about via my Online trading Course.

The lessons of past bear markets lead me to think that the current rally, if there is one, may indeed be tradable. Having said that, I expect to hold off until next week before making any decisions to attempt such a trade.

The bigger picture remains murky. Past bear markets have not ended so easily, as seen in the two examples above. As such, I will not be allocating any of the near-40% cash held in our Platforms too enthusiastically back into the market. If we trade a rally, it will be using a small allocation of our cash. When I see a true trend break, I will go into the market with commitment. That has yet to happen.