Today we will look at the Bear-o-meter reading for December 2022. This is the last reading for the year, and the reading is an interesting one. As a pre-amble – for new readers (we took on 40 new subscribers last month alone, so there’s lots of newbies in the mix): Each month I publish the reading of my Bear-o-meter risk/reward indicator. The Bear-o-meter is a compilation of various indicators covering the broad views of value, seasonality, market breadth, breadth-momentum, sentiment and trend. It is quantitative in nature – no “opinions”, bias or conjectures. Only binary readings of these factors to help us measure the relative weighting between risk and reward. For those of you following this blog regularly, you know that the Bear-o-meter is often a pretty accurate reading of that relative risk/reward tradeoff for markets.

Read my book Smart Money/ Dumb Money to learn how to construct the meter on your own.

The Bear-o-meter assigns a reading of 0-8, where 0 represents the worst trade-off for risk vs. reward potential, and 8 represents the ideal situation. Note that risk and reward are still present – no matter what the reading. Eg – a reading of of “0” doesn’t mean a lack of return potential for market. It implies higher risk conditions.

Same with a high reading like “7” or “8”. Risk of market downside still exists, no matter how low that risk has fallen. I’ve divided the indicator into 3 segments. The left segment is the generally higher risk zone, the middle is the average-risk zone, and the right zone is that of lower risk. 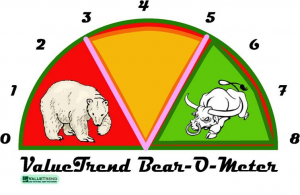 Last month’s reading was a “2”. As noted in that blog:  “The current market environment is one to tread cautiously in, but not to be running away from at this stage.” My reasoning for the more optimistic (albeit still cautious) view was that the meter had been stuck at “0” for most of the year (correctly anticipating the bear market). A move to “2” was a big move to the plus, all things considered. Still, not without its warnings of potential risk.

My research shows that when too many stocks have ripped quickly from under loved conditions  (aka below their neartermed 50 day SMA’s) to well over that line, the market is overbought. Even if its just temporary. The $SPXA50 line is whippy. So its a neartermed condition indicator that can quickly reverse. The SMA line is less whippy, more trend spotting. Hope that helps.

Had I taken this reading on Friday, the SPX, at about 4080, was above its 200 day SMA (4044). But when I took the reading today, its below the 200 day SMA. Damn, that’s close! And – the hard part is that it could move above the 200 later this week. Or not… So you need to keep that in mind. The current score of  a cautious/higher risk “2” becomes a neutral “4” in a blink of the eye, if all other conditions remain.  Because the 200 is a long trend spotter, its considered  quite bearish if the indicator is below its 200 day SMA. But it looks like we’re in a possible transition from below to above the SMA–or not! So its a little tougher to trust this indicator until we get some time above or below the 200 to confirm the score.

All I can say is that we bought a little more last week for our models, but we are still near 30% cash. We really need a firm commitment of the SPX to stay above the 200 day SMA to buy a significant chunk of stocks. Again, this can happen at any time. I’ve noted that the first 2 weeks of December are often lousy, and the last two weeks are often good for markets. So, lets keep an eye…