Home / Damned if you do…

Damned if you do…

Before getting to today’s charts, here are a few random Fed and and somewhat insightful (yet funny) Investor comments that I came across over the weekend:

Pent-up consumer demand not so pent-up?

“A key determinant of the economic outlook is the extent of pent-up consumer demand. While not ruling out a future recovery, our initial readings from our April SCE Spending Survey suggest that consumers are not expecting a substantial rebound in spending in the near future. “ 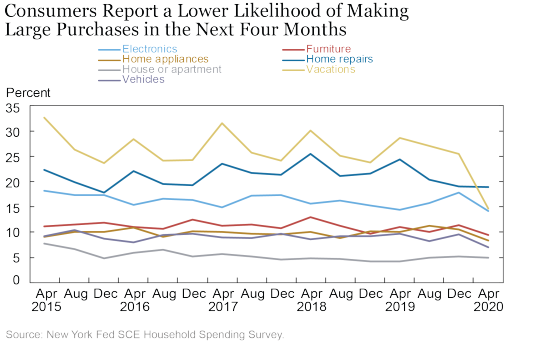 Neel Kashkari, Minneapolis Fed President, said that he expects the path to economic recovery from the coronavirus will be a “long, hard road” and not a V-shaped rebound.

“Barring some healthcare miracle” such as an effective therapy or vaccine, “it seems we’re going to have various phases of rolling flareups, with different parts of the economy turning back on, maybe turning back off again.”

“Mr Market..you’re a no good bum living off debt in your Uncle Powell’s basement.”

“The Fed can print money as long as it wants. But they can’t print earnings!”

“Don’t take refuge in the false security of consensus”

Damned if you do…

Below are two charts I’ve shown on this blog before. They illustrate the patterns seen during the 2000-2002 bear market,  and the 2008-2009 bear market. I want to focus on a tendency that I discussed on “The Plan” blog

That is, the tendency for the market to reach the 200 day (40 week) Simple Moving Average (SMA) and find resistance at or near it during bear markets. In the charts below, the 200 day SMA is represented by the red line. My contention is that a true bear market can be identified by the inability of the market to penetrate this line for a meaningful period of time, before reversing again.

Therein lies my reasoning behind today’s blog title. Right now, we are in no-man’s (or woman’s, or people-kind’s) land. My rules force me to keep a level of cash in our equity models so long as the SPX remains below its 200 day SMA. Aiding that rule is a low Bear-o-meter reading as discussed on my last blog. Until the market either retraces down to some reasonable level of support (inspiring a allocation of cash into equity for a potential trade), or breaks the 200 day SMA to the upside, I maintain some cash.

Observation of the above charts suggest that buying when the market is just below the 200 day SMA as it is now is more of a gamble than a strategy – whereas a break of that same average that lasts 3 weeks can imply a renewal of the bull market. We can look at the current chart below, noting that we are in that vital zone just below the 200 day SMA.

To enter now may prove damning. Yet, if the market rises and breaks its 200 days SMA, there is always the regret of not enjoying the return you would have made on your cash. Damned if you do, damned if you don’t. For the time being, I will continue holding my 35% cash allocation, and see how the market plays out. Better to regret missing some of the gains than regret taking all of the losses, in my way of thinking.