Since 1999, I’ve been touting that markets move between secular bullish periods lasting 15+ years, followed by secular bear markets that can last up to the same number of years. Visit www.valuetrend.ca and click on the icon at the bottom of the page entitled “We saw it coming” for an article I wrote in late 2000 predicting the secular sideways market that began around that time. The market has officially cracked my predicted multi-year sideways market. It’s official, folks, we’re now in a secular bull market that should last for at least another decade. However, thats not to say there won’t be 10-20% corrections along the way. Below, I’d like to highlight a few factors that may suggest such a correction is due some time after Q1 of 2014. Such a correction would be a significant buying opportunity. Below are five factors that may influence markets during 2014, including some upside/downside targets for the coming quarters. 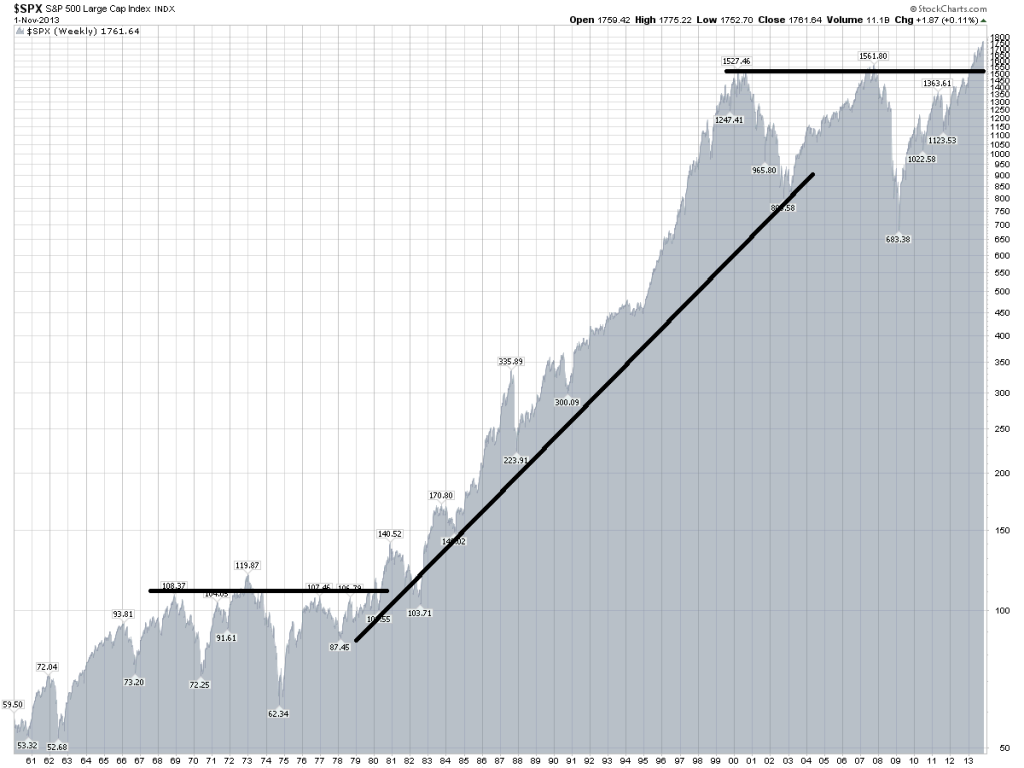 I’ve presented this cycle in past blogs, but for those who missed it – below is a chart of the S&P 500. The vertical lines are drawn at market troughs. A ryhthym of about 5-6 years between troughs, were it to continue, would suggest a near termed peak and a market correction in 2014.

Mid-term presidential years (2nd year of the 4-year term) is statistically bearish for stocks in Q2-Q3. In particular, mid-term presidential cycles tend to produce, on average, marginally weak/flat April’s, followed by -1.4% May’s, and -1.8% June’s. July’s are typically positive, followed by slightly weak August & Septembers (-0.3%, -0.7%). These, of course, are just averages, but it is something to keep in mind.

Research by Sid Mokhtari – Chief Technical Analyst at CIBC World Markets suggests the tendency for years following a 20% or higher performance by the S&P 500 to experience a weak Q2-Q3. Interestingly, such corrections typically lead into very strong Q4’s – leading both Sid and myself to believe that any corrective actions after Q1 of this year should be viewed as a buying opportunity. Combined with the presidential cycle statistics mentioned above, this tendency should be taken into consideration.

The Investors Intelligence poll of newsletter writers is at 59.6% bullish and 14.3% bearish as of the end of December 2013. That spread is an extreme ratio often seen near market tops.

Similarly, the American Association of Individual Investors [AAII] shows investors are 55.1% bullish and 18.5% bearish. Investors polled have 64% of their portfolios in stocks at this time. They were 69% stocks before the 2007 market peak.

Ned Davis Research Inc. is expecting a 20% market decline in the next 12 months based on their proprietary sentiment composite. Similarly, www.sentimentrader.com has a sentiment composite that has moved into a higher-risk intermediate termed outlook. My favorite sentiment indicator, the “Smart money/ Dumb money” ratio (also by sentimentrader)  is showing dramatic bullishness by the least efficient investors (dumb money) and caution by the more sophisticated investors (smart money) see the chart below.

I should mention that my interpretation of these survey’s is not to suggest a major bear market is coming. The sentiment surveys provide evidence of excessiveness ready to be corrected -the degree of which is less drastic when contained within a secular bull market.

A near-termed price channel (in pink) suggests that the S&P may be due for a short termed correction after the Santa Rally finishes. Based on a linear regression channel (blue lines) drawn on the S&P 500 going back to 2011 – the more significant target for the S&P 500 lies somewhere at or just above 1900. This lines up with support, marked in green on the chart. A correction target might bring the S&P down to 1725. A return to the bottom of the regression channel would suggest a maximum downside target of 1650 or so.

The TSX 300 broke out of its 13,000-ish base this year.  My short-termed target for the TSX is the 2011 high of 14,300. A significant correction would not likely see the 13,000 breakout point broken – given the significance of that level as prior resistance.

No one can predict the markets with 100% accuracy. However, the above factors are significant enough to merit consideration. If you follow the seasonal strategy of “Sell in May & go away” as I do, you would by default reduce your exposure to a significant correction, should one occur in Q2-Q3. Any significant correction seen in 2014 should be viewed as a buying opportunity within the secular bull market.