This being the Chinese Lunar New Year Kung, I thought I would start off this email with the traditional greeting of  “Hei Fat Choy” –which roughly translates into “Congratulations on Becoming Rich”.

Investors have done well if you heeded my suggestions to consider an investment in Chinese equities originally back in July 2014 https://www.valuetrend.ca/opportunity-in-chinese-markets/, then again in November of that year  https://www.valuetrend.ca/these-2-emerging-markets-look-bullish/. In fact, buying into the Chinese markets may well have helped you become rich on that trade. If so… congratulations!

My target for the Shanghai was 3000, as noted on my original blog when it was trading around 2100. I’d like to follow up on those emails by reviewing the Chinese markets current status. The Shanghai, it should be noted, is closed from Feb 18th – 24th inclusive, so don’t expect much action on the ADR’s and ETF’s traded on our markets until next Wednesday.

Above is an updated version of the original chart that I posted on my blogs back in 2014. Note that the Shanghai has, right on schedule,  reached my target zone of its former resistance point. Currently it is finding some trouble breaking through that level. Stimulative monetary policy announcements or some other economic factors will be needed to blow through 3400 on the Shanghai. Momentum indicators are rounding over from overbought levels.

Don’t forget that the Shanghai trades the “B” shares of Chinese companies. These companies are not strictly regulated regarding generally accepted accounting principles (GAAP) used in most developed countries—and many are smaller capped names.  The “A” shares—which trade in Hong Kong, are usually subject to better accounting standards. Many of the larger capped stocks whose companies use GAAP are available for purchase via ADR’s (American Depository Receipts) and are traded on US exchanges. I recommended a position in the BMO China ETF (ZCH-T) on my BNN Top Picks that November, given my preference of buying the safer names held in that ETF.  Here’s the Globe and mail article outlining that trade, and two others: http://www.theglobeandmail.com/globe-investor/funds-and-etfs/etfs/three-top-picks-from-valuetrends-keith-richards/article21512076/

Disclosure: We hold a position in this ETF in our managed accounts. So let’s see how this ETF is doing, contrasted to the Shanghai chart.

Below is my original chart, updated to today, showing my observations of the ZCH trade on BNN. As you will note, the major momentum indicators (MACD and RSI) are NOT rounding over from an oversold position. Stochastics, a faster moving indicator, is flattening. There is no significant level of resistance ahead of this ETF—suggesting that the larger capped ADR’s are not facing significant hurdles ahead. If you have ever attended one of my speaking engagements, you will know that I endorse a methodology of using the 200 day MA to determine if a market is due for a correction. I look for a 10% or higher gap on the stock over its 200 day MA (40 week red line on both charts). If that occurs, I expect a correction and await a better buy point. I don’t sell on that signal if I already hold, but I certainly don’t add to my positions. As you can see on the ZCH chart, the stock is above its 200 day MA by less than 10%. It’s not looking for a significant correction yet. But the Shanghai is some 25% above its 200 day (40 week) MA. Again—a sign of an overbought market that is due to correct. 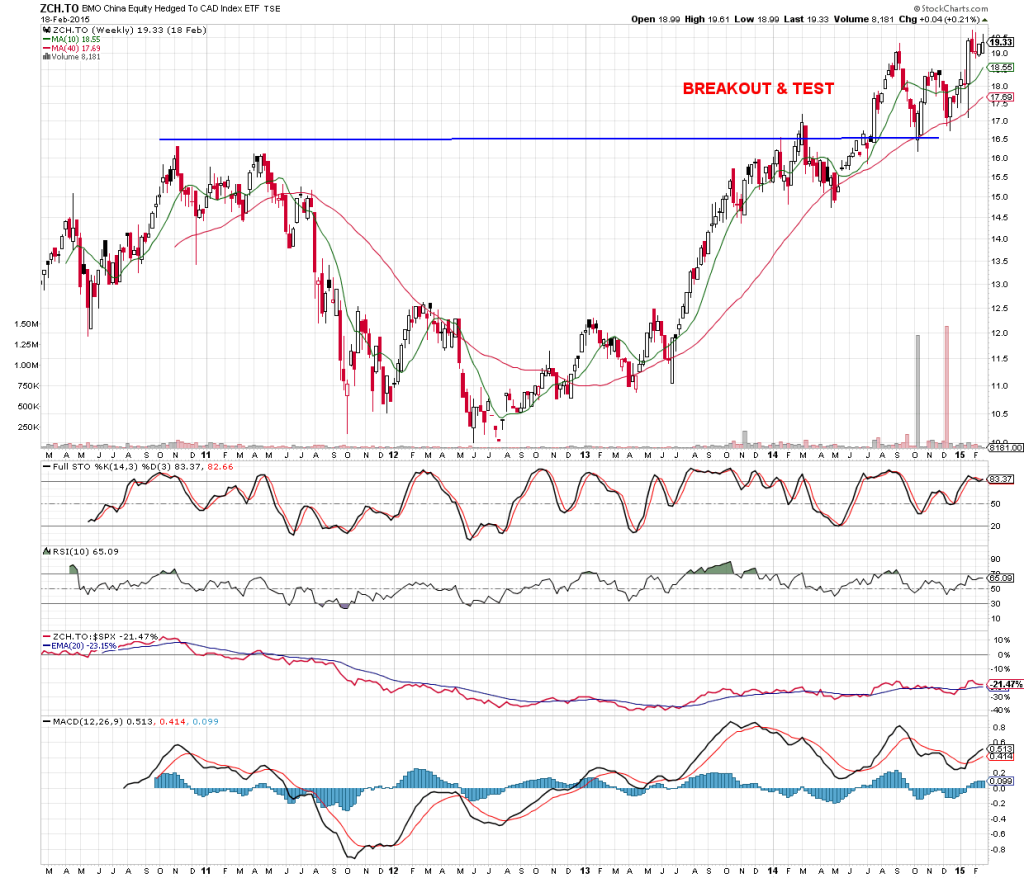 I remain long both my holdings in ZCH, and some individual ADR’s in China and emerging markets. Investors who own a Shanghai-related ETF might expect a bit more corrective action in the near-term.

Phone in with your questions on technical analysis for Keith during the show. CALL TOLL-FREE 1-855-326-6266. Or email your questions ahead of time (specify they are for Keith) to [email protected]

Keith will be speaking on how to “Win by not losing”: Using the power of technical analysis to profit in uncertain markets.