There is a relationship between the USD and the stock market. Below is a pretty long chart of the S&P 500 (red line) vs the USD (black line). It goes back to 1990. I’d like to note that the USD index displayed is that of the USD against a world basket of currencies. This is not a specific USD/ CDN$ index. As you will note on the chart, there are many distinct periods of time where the S&P500 and the USD are quite negatively correlated. They trend in opposite directions. 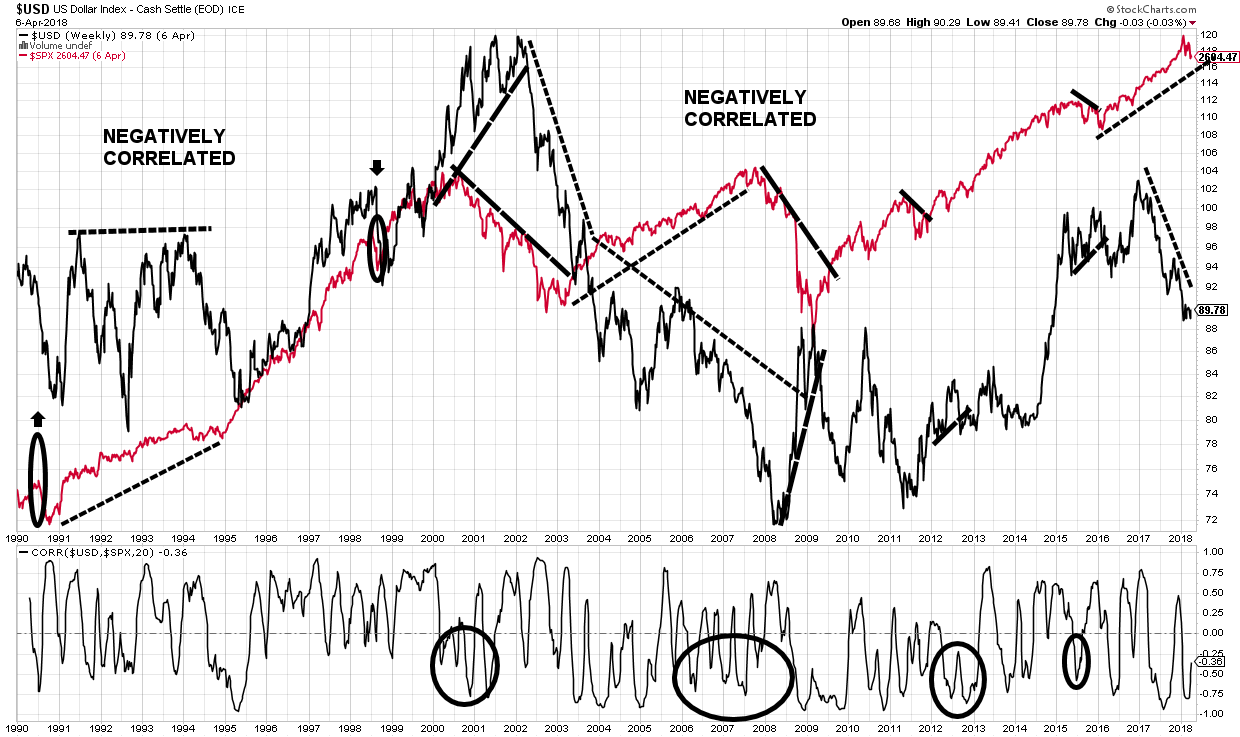 We can also observe the correlation study at the bottom of this chart. What it shows us is  that – even when the dollar and the S&P move in positive correlation, they rarely work in a super-tight correlation. You can note that by observing the lack of positive “1.0” correlations where the line moves to the top of the pane.

When the two are trending in opposite directions, you will see quite a few incidents where you get an almost perfect negative “-1.0” relationship. The line goes deeply to the bottom of the pane. What that is telling us is that, when the two are moving in opposing directions, the negative relationship is strong. When they are moving together, it’s not a perfect marriage. So when the dollar and the S&P 500 move in opposing directions, you might “bet” it will be a strong movement. You can also assume, based on how often the two are negatively correlated (note the number of extended opposing moves over the time period studied), that we may be due an opposing move between the S&P and the USD soon.

How do you know when this is going to happen? Well, picture two gunslingers facing off. Whichever gunman (gunwoman) draws first will inspire the other to make their move in the opposing direction. So if the S&P 500 breaks its current consolidation patter (a break will be signified by a take-out of the Feb low in the low 2500’s)- you might witness an opposing  positive strength in the USD. This isn’t the case at this point, given the negative USD vs. world currencies since 2017 – but it’s a good context to set the stage for viewing our own loonie.

Below is a chart of the CDND vs. the USD going back to 2008. You will see that the major trend, aka the “Big Red Line”, has been down since 2010 or so. The loonie has had a couple of counter-trend swings over this period, but it seems to always move back into the negative trend channels. One must assume this trend channel will remain in place until proven otherwise. So, despite the fact that the USD has been underperforming world currencies, it has been kicking the Loonie’s butt for a long time—and even more so lately. Some may recall back in June that I stated on a blog we would likely get a bounce on the loonie, but it wouldn’t last. Here is that blog. 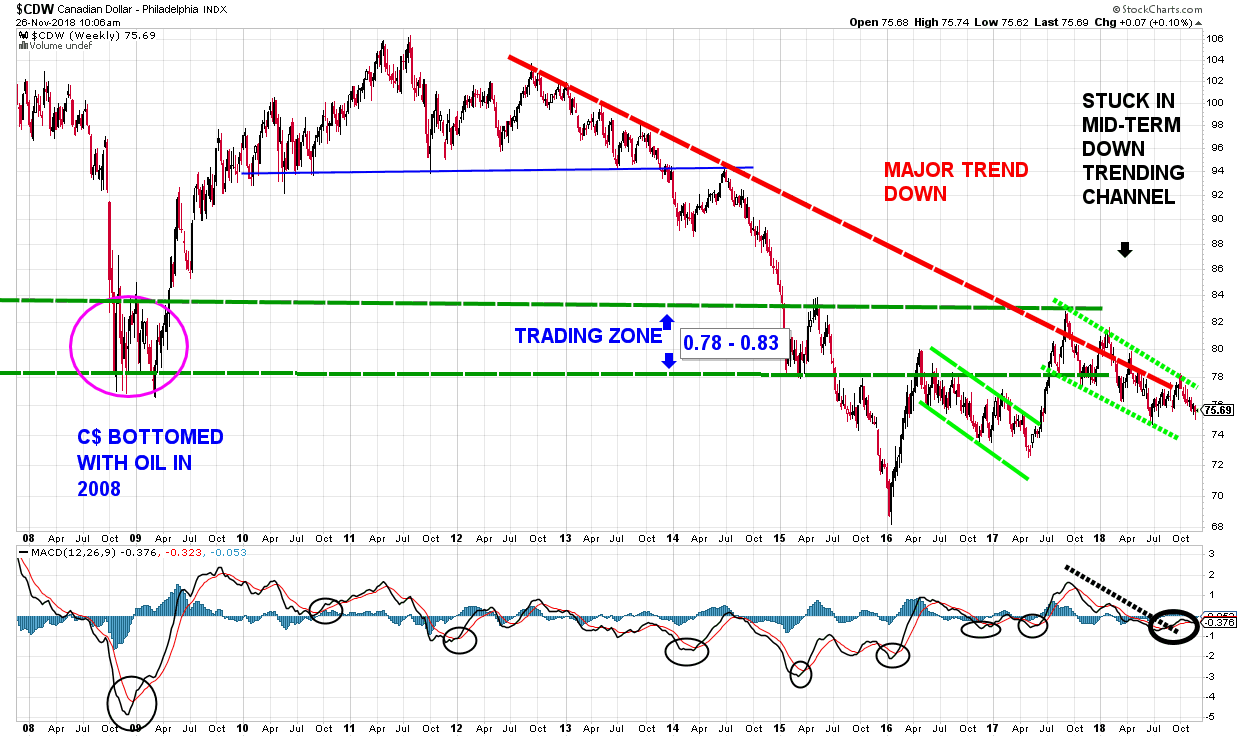 I believe we may see a bit of strength in the loonie that will allow it to get into the very top of its current down trending price channel.  Yes, its pretty close to the top now, so it might just ride the upper band for a while. Seasonals will push it to some extent, as we tend to see a strong loonie over the winter. Thus, it may be a good time to begin reducing USD assets that we are less enamoured with at this time. We may have a bit of headwind against our USD stocks if the loonie rises a few percentage points over the winter. This is not a run for the hills situation re your USD holdings, but its something to take into consideration. 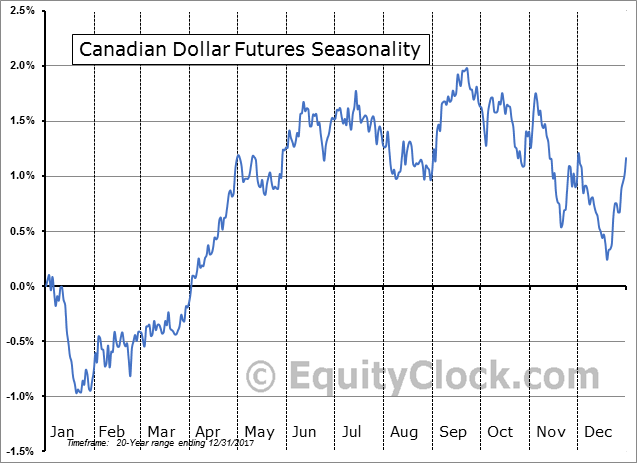 If the market breaks down, don’t own the loonie

A rising loonie would not be the likely scenario if the S&P 500 breaks its February 2018 support level of around 2530. Should that level break on the S&P 500, the odds of a genuine bear market or market crash are increased. That, in turn, would increase the chance of a flight to the USD. World markets tend to move in sync with the US markets. Despite weakness on the US markets, there is typically a flight to safety in the USD in a collapse. Recall the negative correlation of the USD to the market, per the top chart. Falling markets = rising dollar. It doesn’t always occur, but it happens often enough to take notice.

A rise in the USD based on a market crash would put all bets off for a rise in the loonie. However, I am not at all convinced that such a bear market scenario is in the cards for the stock market. Thus, I expect a little bit of strength in the loonie over the winter – possibly resulting from an oversold bounce on the oversold TSX and its respective resources/banking sectors. We shall see.