Home / Checking under the hood

Checking under the hood

I spoke to a client the other day about how I look at markets by using a combination of trend and risk analysis. Trend is reviewed via the price pattern on a weekly chart, including volume and the 200 day (40 week) simple moving average. Risk, on the other hand, is evaluated using a compilation of indicators covering breadth, sentiment, seasonality and relative momentum (overbought/oversold).

I noted that evaluating a market is like evaluating a used car. Many years ago I purchased a used Porsche. This particular model is known as a good car for both daily driving and as a “track” car. So- I did the usual.  I kicked the tires, examined the paint, interior, etc, took the car for a drive, did a Carfax, had the mechanic check the brakes, etc. That’s sort of like trend analysis….you are asking “How sound does the car look on an overall basis?”

Then, my mechanic said he can do a more in-depth “risk” analysis on the engine by hooking it up on a computer system. He checked for time spent in the “redline” (it’s a stick shift), he checked for compression, and looked at other things that even a regular mechanical inspection won’t find.

Like the Bear-o-meter, this deeper check by the mechanic may indicate signs of internal risk. But, that doesn’t always indicate catastrophic engine failure is imminent. In fact, this particular Porsche has a “racing” reputation, and should be able to take a certain amount of punishment. Nevertheless, you’d probably agree that a healthy looking internal checkup probably gives you confidence for buying the car. I ended up buying the car.

This is somewhat like my Bear-o-meter reading. It tries to look at things that most market participants don’t take note of.  A lousy Bear-o-meter reading doesn’t imply doom. It is, however, a caution flag that the market may have been, literally, over-revved. Which may be a bad thing.

Where the Bear-o-meter sits today

Last month, we had a bearish reading (very high risk) on the Bear-o-meter . That high risk reading conflicted with the trend. Despite the high risk warning provided by the bear-o-meter – we witnessed a bullish breakout thought the old resistance point on the S&P 500 (SPX). For those who didn’t read my last blog – that breakout was an important one. The SPX had been contained below 2950 since January of 2018. So on the one hand we had a bullish breakout, but on the other hand, we had higher risk market internals. To repeat my comment of yesterday: It was one of those “damned if you do/ damned if you don’t” situations.

So where are we right now? Well, you know from my last blog that we are still in a bull trend on the S&P 500.  This, so long as 2750 and the 200 day SMA doesn’t fail. The move back into the sub-2950 zone indicates a pause, but not a breakdown. As far as the Bear-o-meter goes, we are currently reading “2” on the Bear-o-meter. That puts us in the higher-risk zone. But it’s not as extreme as last months “0” reading – which, as it turns out, was accurate.

The factors that changed were: 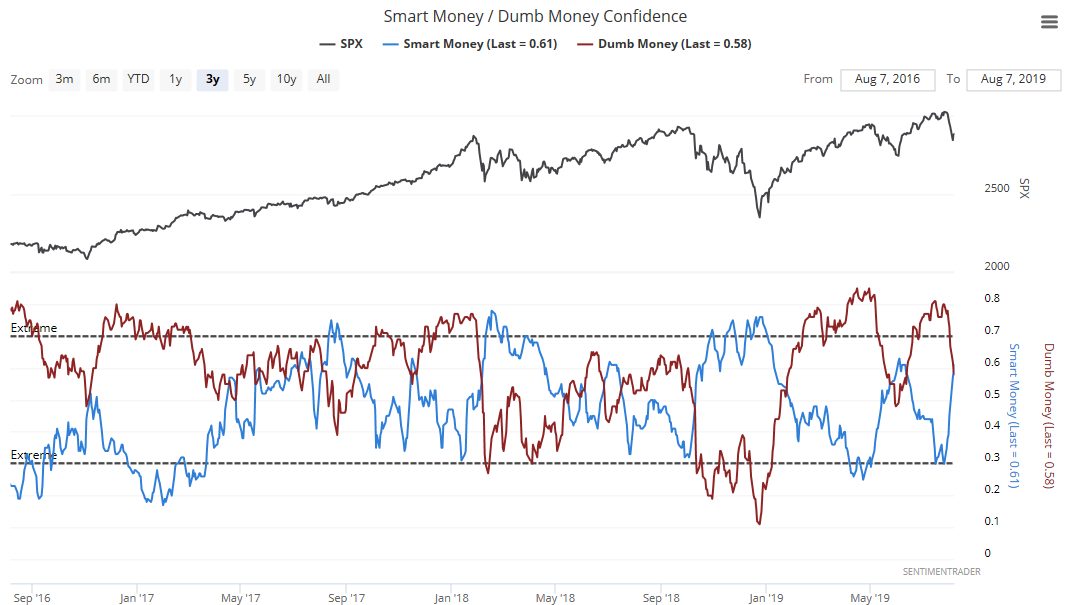 Most other indicators remained about the same. The one that stands out the most to me is the failure of the Dow Transports to move into new highs when the industrials hit new highs a few weeks ago. That indicator continues to register a negative score within the compilation – note the lack of a new high on the TRAN chart below. In fact, TRAN’s last peak was decidedly lower than its peak in the spring.

We have a weak bullish trend in place on both US and Canadian markets. We also have a higher risk reading on the Bear-o-meter – albeit not nearly as bad as last month’s risk reading. In other words – while it’s not time to run for the hills, there remains enough evidence at this time to proceed cautiously.

Don’t forget to register for the MoneyShow ahead of time and miss the lineups. Here is the link to my presentation, and registration information.