Here are some charts I am following for various reasons. I’ll look at the loonie, WTI oil, Canadian oil, the SPX, the TSX and Europe. If you have any broad market or sector charts you’d like me to address, please put them in the comments at the bottom. Here goes:

The loonie’s fate is now largely driven by oil, and by debt. I’ll cover oil in the next chart.

We have too much debt, thanks to a government that was spending in a pre-recession manner (and I might add, largely on things that do NOT aid our economy) BEFORE the current crises hit – see this Financial Post story. We also have the most over leveraged consumer in the world, as explained in this blog .They are now facing the prospect that this situation extends beyond temporary layoffs. A quote from David Chapman, of Enriched Investing:

Small business typically makes up upwards of 70% of the (US) economy by employment and represents over 40% of GDP. As businesses are just forced to close their doors (estimated to be upwards of 50% within a month of two of this if aid does not reach them) as this drags on, millions of workers will effectively have nothing to go back to. Ergo, the rush to get assistance to them. University and high school students looking for summer jobs are now behind a mass of unemployed waiters/waitresses, bartenders, and countless others. Careers will be dashed. Hope for the future stymied.
The Canadian unemployment situation is potentially just as dire. Canada’s official numbers do not come out until next Friday. Canada has seen a stunning 2.13 million unemployment claims since March 16. That amounts to around 11% of the total labour force. As in the U.S., many of the businesses that let employees go may not come back the longer the lockdowns last. We are witnessing a potential labour disaster of unknown proportions…..Upwards of 80% of the working population lives paycheck to paycheck and the rent came due April 1. Thousands were unable to meet April rent and we have already heard of eviction notices.
A steep recession? Absolutely. An economic depression? Highly probable and we are not prepared for it.

Here’s a chart that I keep in my chartlist, and support points that I had plotted many years ago. Interestingly, my noted 0.70 support point was roughly met and held recently (we saw about 0.69 a week ago). One can hope that 0.70 continues to hold. If it doesn’t, it can easily go as low as the 2002 lows.

WTI oil is the benchmark. Below is a chart with support lines. I had noted support levels and kept them on my chart list from years ago. They  held, until they didn’t.

WTI had major support at around $42. Then $50. That’s where we picked some up for our VT strategy, with an eye on selling around $60 resistance. You can see that after it broke $50, it found support back at $42. Under normal conditions, that level should have held. But it didn’t. Times are not normal. We sold a bit of our oil on Friday, but still have about 5% exposure through some producers.

WTI’s current challenge is the old lows of 2016. Last week’s price pop on the potential for Saudi-Russian talks (which are now delayed until later this week) pushed prices to that high-$20’s  point. That’s a level of resistance, albeit not as significant (due to the one-and-done nature of that spike) as $42. Momentum is oversold enough to allow a bit of positive news from this week’s meeting to influence it positively. 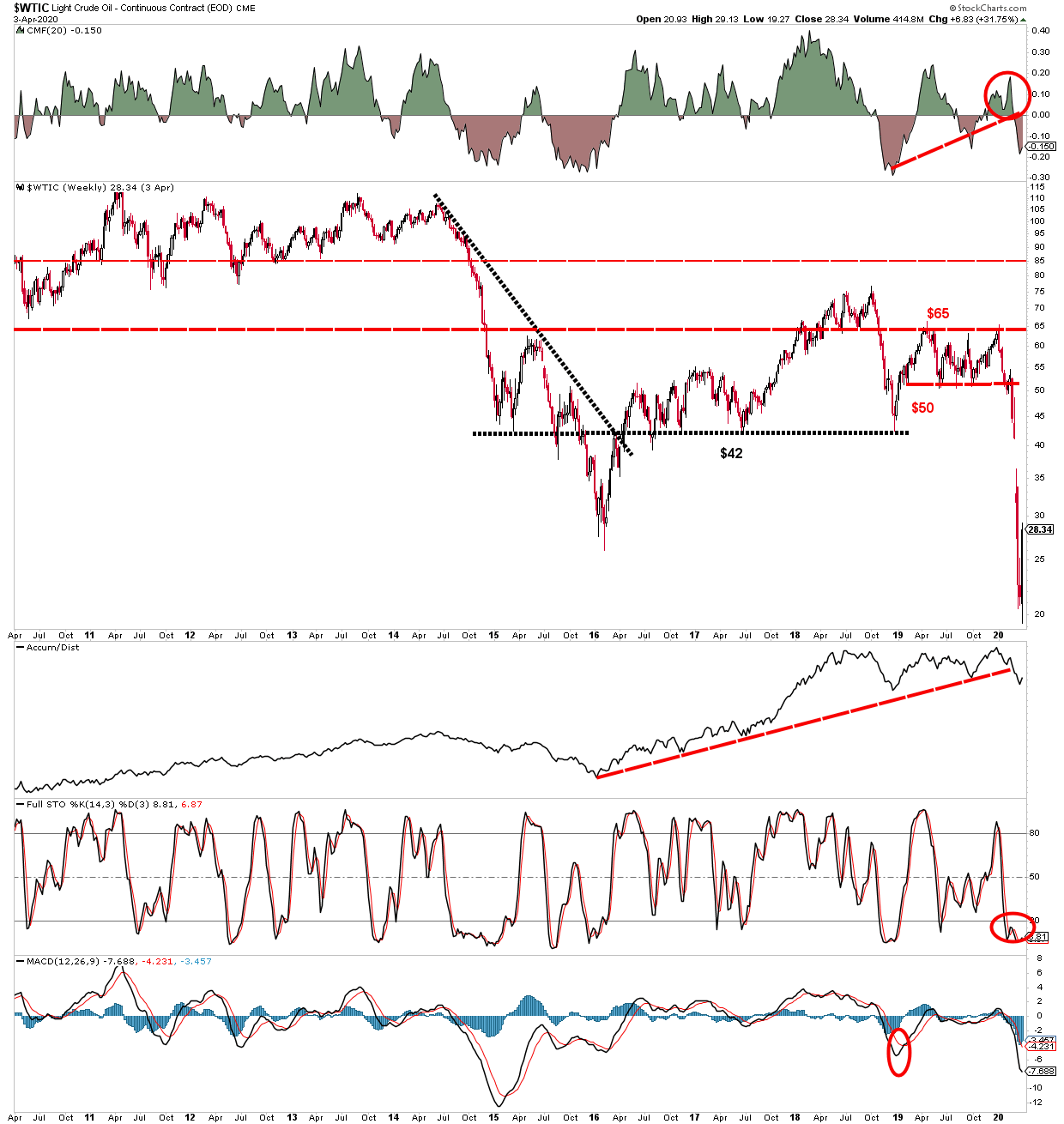 Here’s the Canadian oil index chart. It’s just below the lows of 2018, and above those of 2016. Canadian oil trades differently than WTI to some extent. The good news (if any) is that it hasn’t broken its old lows by much at all, suggesting support resides at current levels.

So again, good news this week will help oil which in turn helps the loonie, possibly moving it (the loonie) back to the low-mid 0.70’s. Bad news will solidify the break below 2018’s lows, and (aided by falling oil prices) will present a reason for the loonie (top chart) to move into the low 0.60’s.

The SPX is just now touching its last rebound high at 2650. That’s first resistance. Then comes 2750, and 2850. Stochastics is getting up there, but still has room to go. RSI has plenty of upside before it gets overbought. Positive news this week on earnings will drive the SPX through 2650. Keep an eye on earnings and virus news. That, along with these resistance points. Watch for momentum becoming overbought. Stochastics is close…. 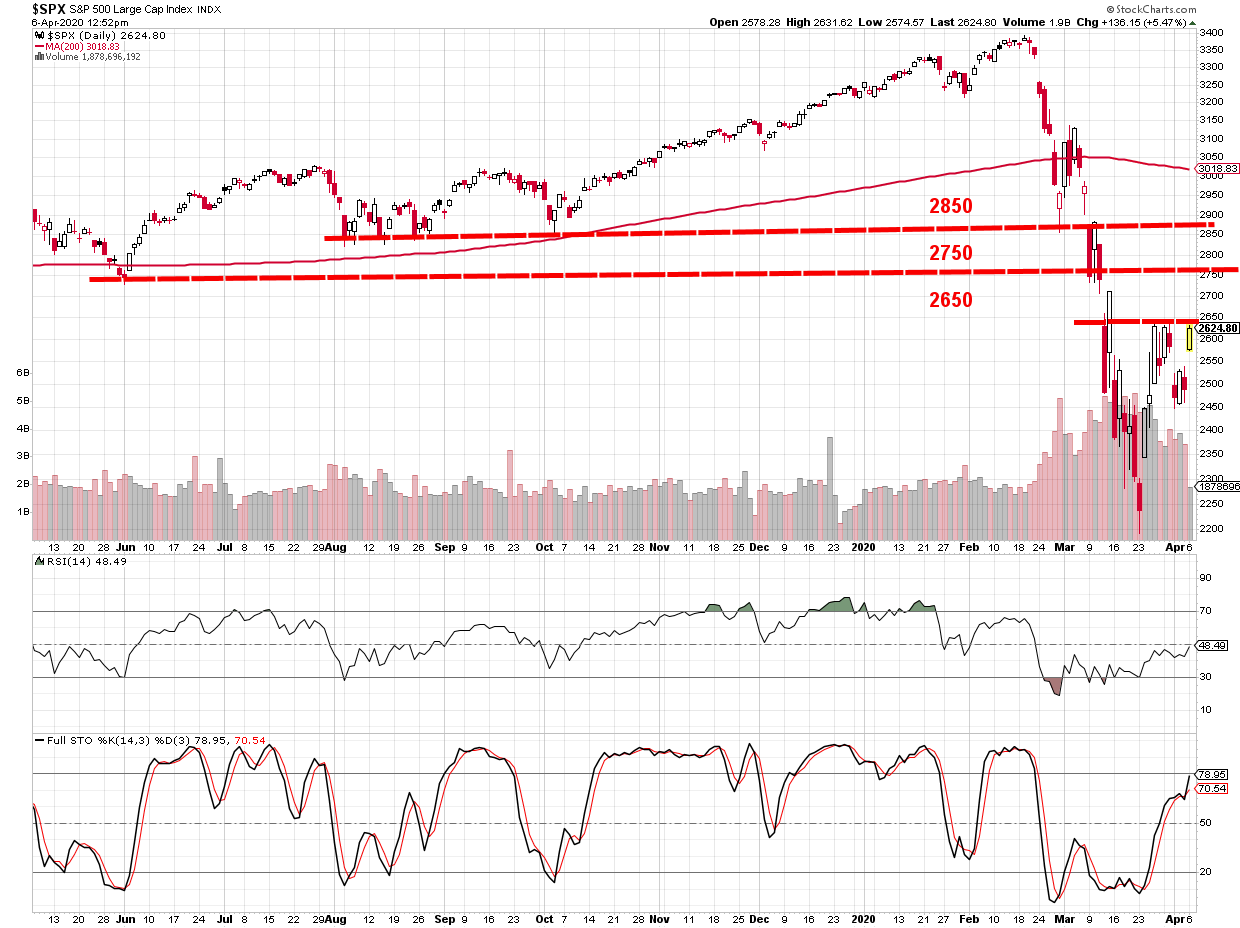 The TSX300 is about 30% energy names, and almost as much in financials – who (banks) rely on energy for a chunk of their business. No surprise to see this chart is not a heck of a lot different than that of WTI lately. Hardly worth posting, but what the heck. Follow oil and know how our index, or banks, and our loonie will do. Canada relies on energy for its economy. Good thing that sector got so much support from our government in the past few years ….just ask Alberta! 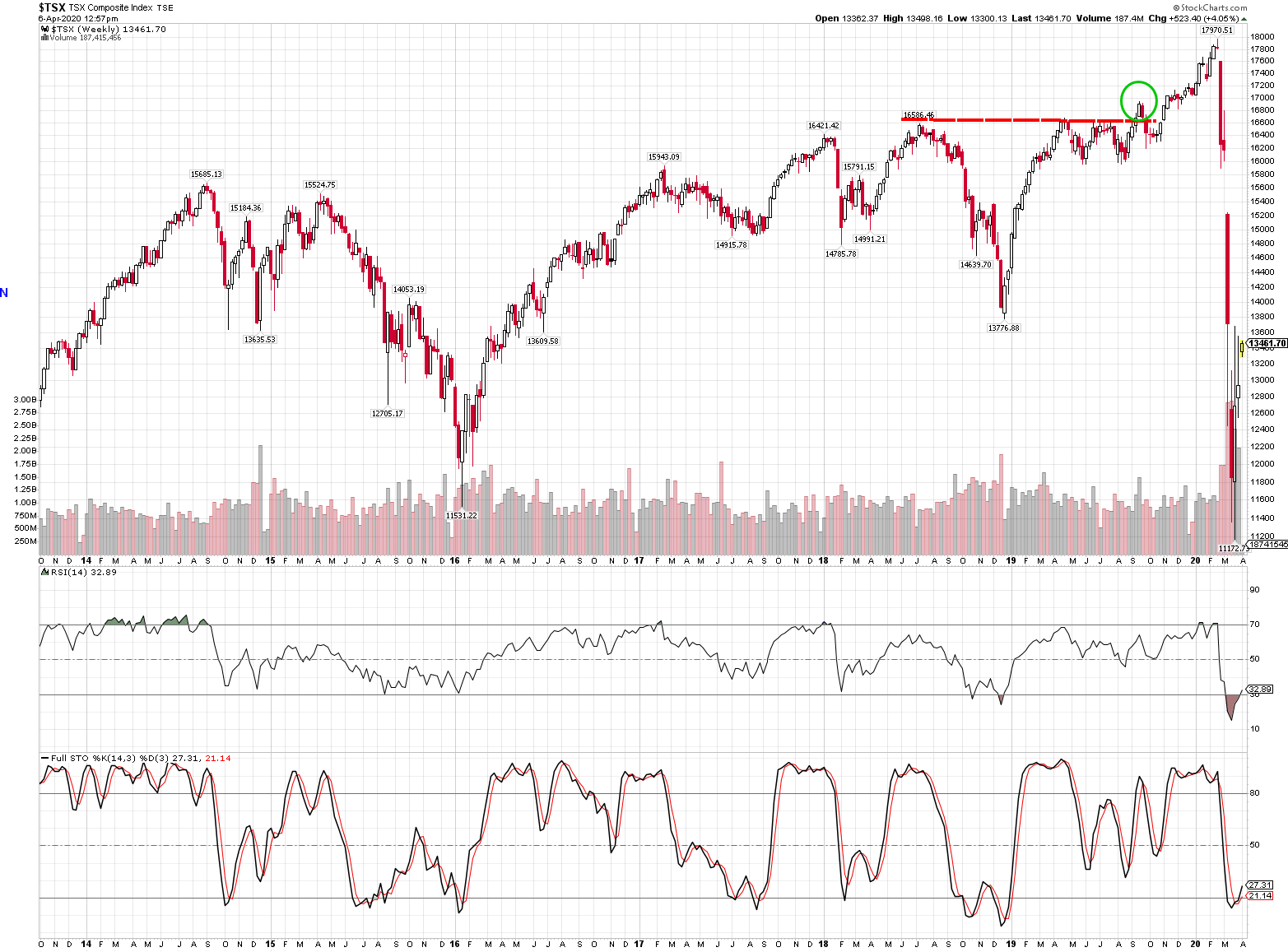 The broad European chart (IEV-US) shows support at current levels. Disclosure–we own this ETF in our models. We bought on the H&S neckline breakout, circled. As with absolutely everything, it moved before our 3-bar sell rule applied. So we still own it. Recently, it broke current support at $33 momentarily.  But now its holding. It looks like $38 is possible. We shall see. News will drive this chart more than technicals.

Let me know what you want me to cover. Make it something broad (an index, a commodity, a currency, asset class or sector) or a well followed and influential large capped stock. Something that is of interest to all readers, not just to yourself. Thanks!