Investors looking at real estate in Canada – and securities connected to real estate might want to consider some research presented in this blog. Today’s blog is a collection of my own charts, and some other research services I follow surrounding the sector. Real estate securities could include REIT’s, Home Builders, Realtors, Home Improvement Retail stores, and even financial / Mortgage lenders like banks and independents. Even peripheral companies that sell to, or service the home building industry can be impacted by broad real estate trends. Thus, real estate markets could have an impact on your stock holdings, even if you don’t have direct exposure. With that in mind, here are some thoughts for your consideration.

World Real Estate since 1975: Canada the most overvalued 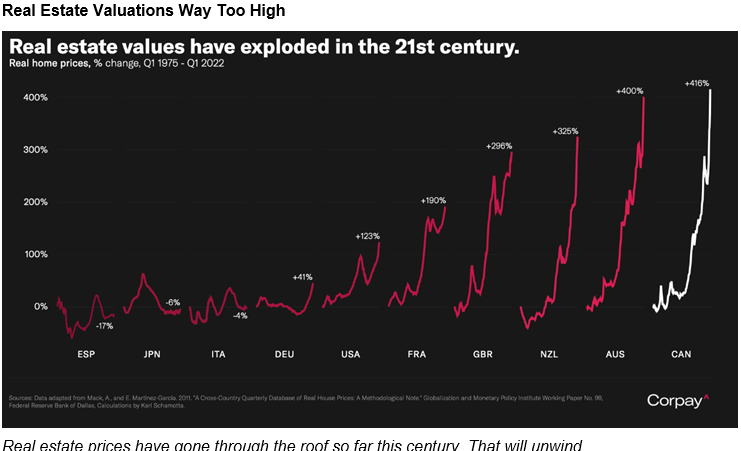 “I used to be a Loonie bull, however, the recent swing in gov’t control (Liberal minority – Deal with NDP), has placed power in the hands of Trudeau. He might possibly be the most incompetent PM Canada has seen.  The Real Estate bubble did not start with him, in-fact Harper had strictly controlled the housing narrative in the 2009-2015 era and this limited the CMHC’s ability to have true oversight in Canada’s real estate market. In addition, Canada narrowly missing the 2008 recession, did not give the economy the proper medicine it needed to drop debt ratio’s in Canada. I truly believe that Canada will have an exceptionally tough time in a higher-interest environment. Short the Loonie against all the crosses, I think even shorting the  Loonie on USDCAD, if we fall below 1.2000. I project USDCAD in 2024 could be north of 1.4000.” Anonymous CIO quoted in BearTraps Research report

I’ve shown this chart before: 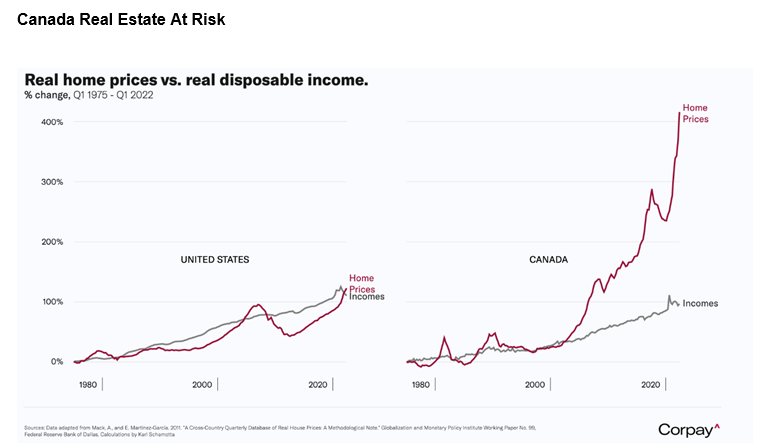 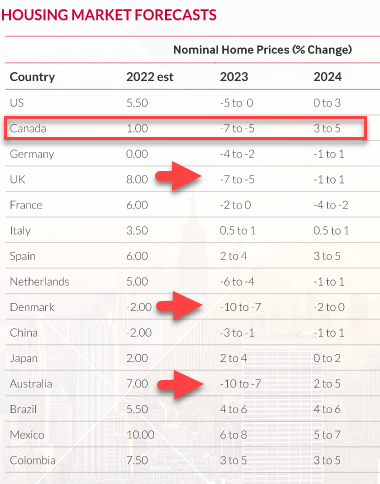 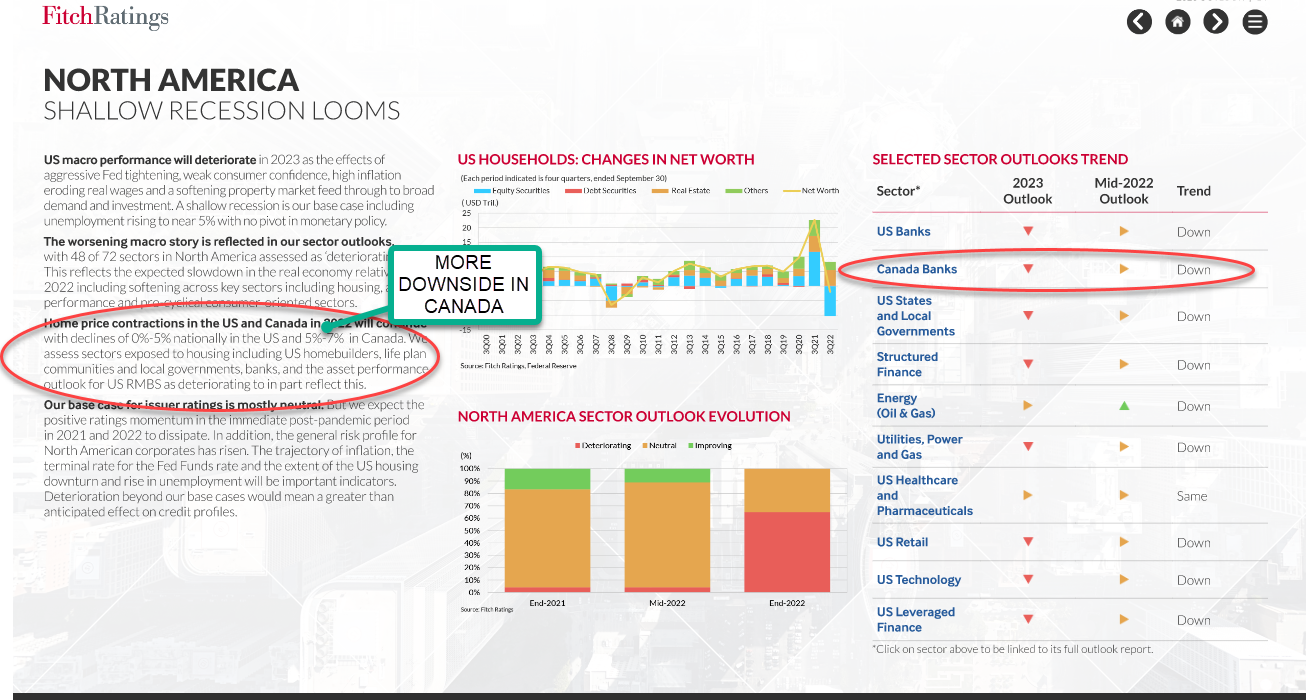 Some thoughts regarding when rates will be cut. Note that, even with CPI just over 6%, well off of its 8% + reading in June, we are nowhere near historic norms of 3%, let alone the rather unrealistic 2% goal of the Fed/BOC.

“Data shows that headline inflation continues to ease, but that is yesterday’s news. The market views falling inflation as a savior, but the issue is there is no longer a 1:1 relationship between inflation and the Fed funds rate. While a decline in the inflation rate back to 2% gives the Fed more flexibility to cut interest rates if the economy rapidly deteriorates, it does not mean the Fed will automatically cut rates” MarketDesk Research

Newmark (NMRK-US) is a worldwide real estate agency. The chart suggests a base – after a massive hit in 2022. Obviously this is not a buy until that base proves to breakout. 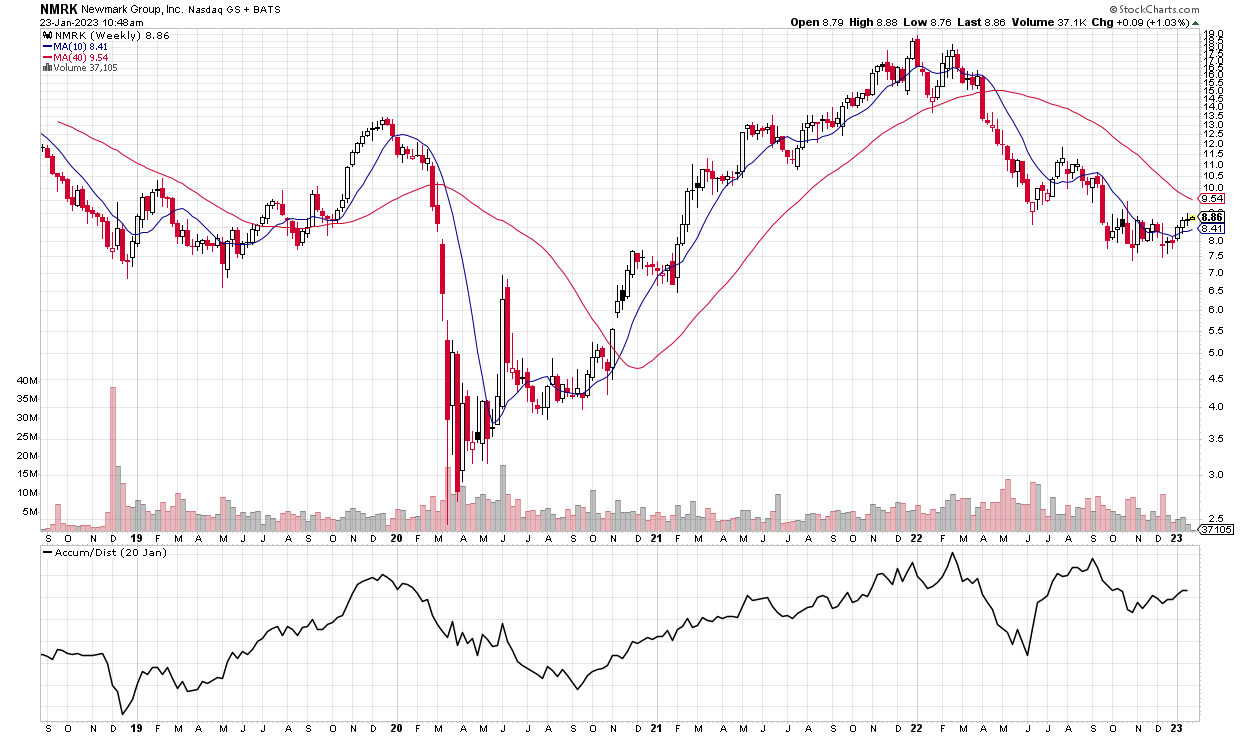 The iShares REIT ETF (XRE-T) covers a broad number of real estate trusts, many of which are commercial/industrial. This implies less impact by the over-leveraged Canadian housing owner. The chart suggests a bullish breakout. 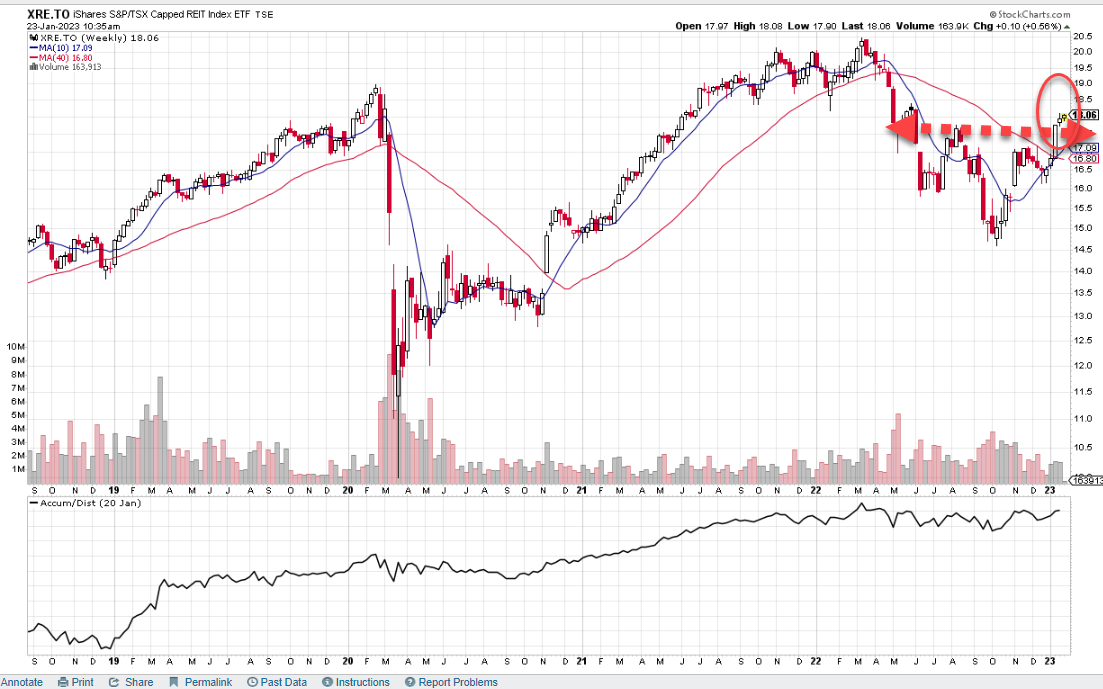 Lowes and Home Depot are the kings of this castle. Both are similar looking –here’s the Home Depot (HD-US) chart. Looks like a nice neckline break after a base. Hopefully it holds….. 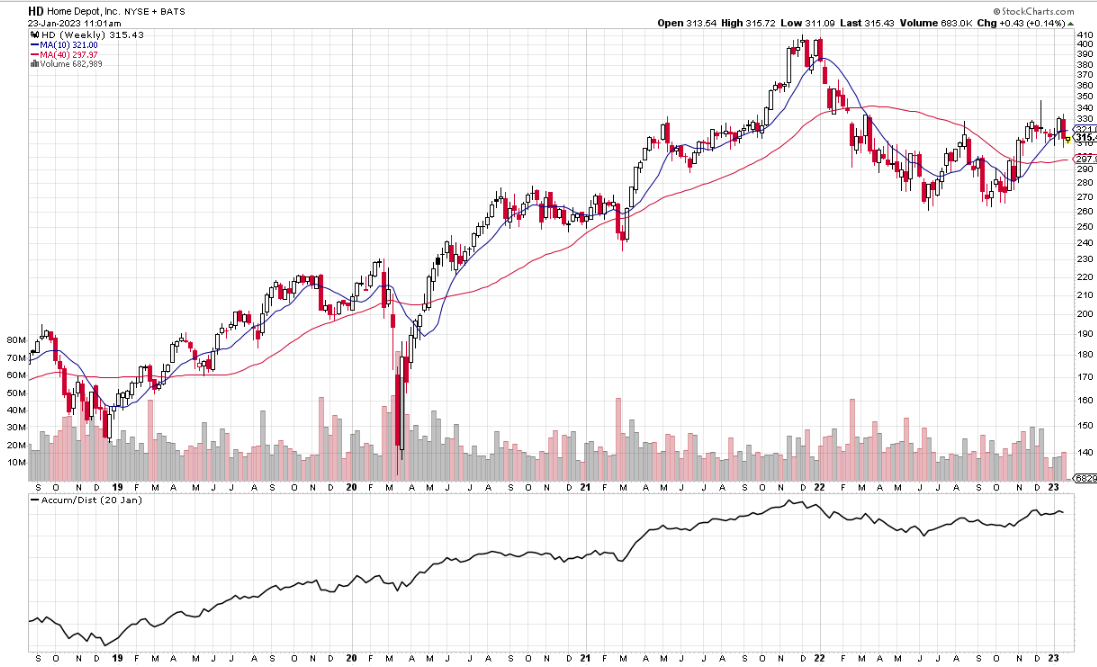 I don’t know of any publicly traded Canadian home construction companies. Lots of them are listed in the USA like Toll Brothers and DR Horton, etc. Again, this is a Canadian problem, not so much in the USA per the charts at the top of the blog. But, for what its worth, the US index shows a pretty nice breakout.

Two classes, so to speak, of mortgage lenders exist in Canada. The primary lenders (banks) and the secondary (independents). We can look at the banks via an ETF like the BMO Equal Wt. Bank  (ZEB-T). We can look at the independent lenders (often dealing with risky clients) such as Equitable (EQB-T) and Home Capital (HCG-T). I want you to note the lack of moneyflow into all  of these stocks–bottom pane on the charts. This suggests that, unless investors begin moving into the sector, the base formations are unlikely to break out….

ZEB suggests a base that has yet to break out. Obviously this is a chart to trade in the range of the base, or buy ONLY if it actually breaks out. 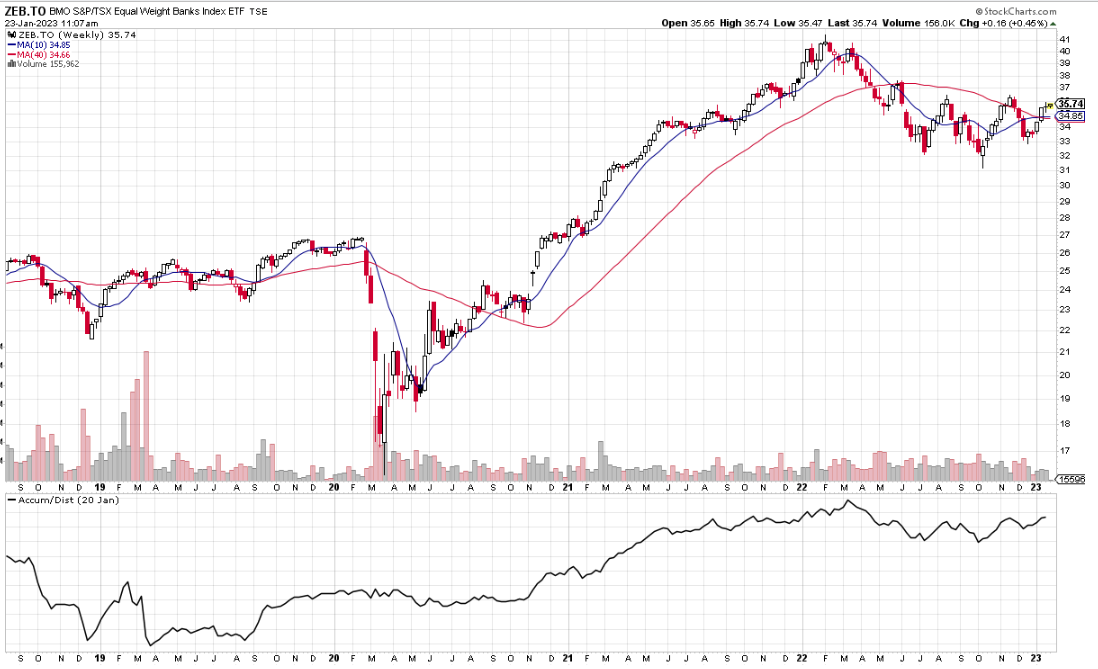 Lets look at Equitable Group. Same chart as the big banks. Stuck in a range, with a neckline that has yet to break. 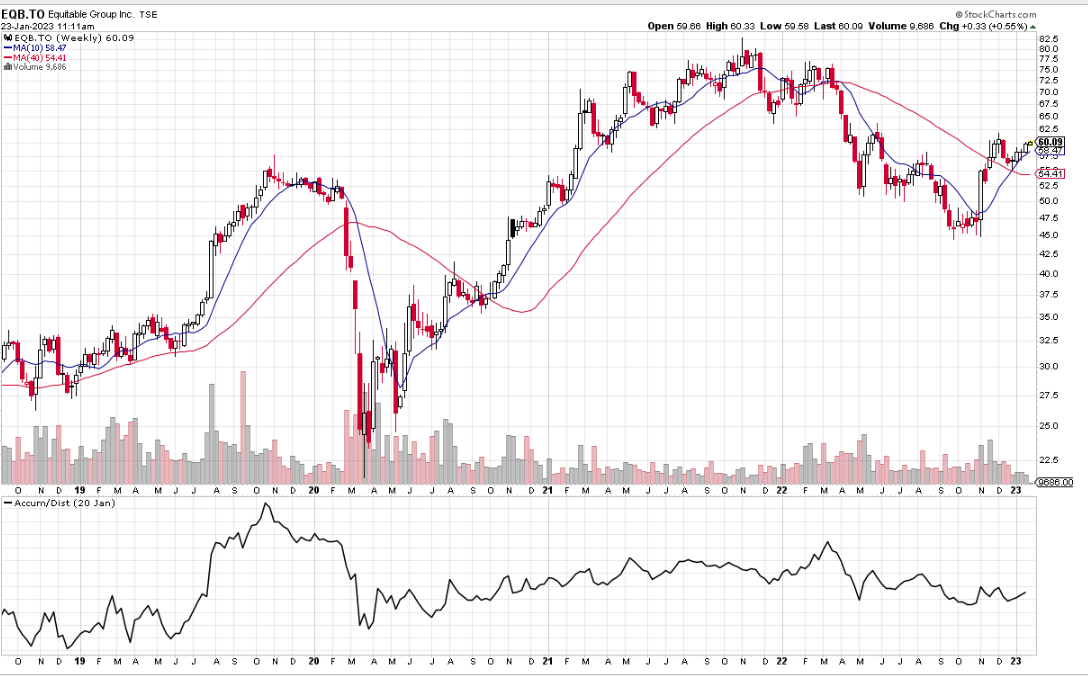 Home Capital Group just had a big pop. Apparently, the investment in the stock by Warren Buffett added something to the move (ya think?). 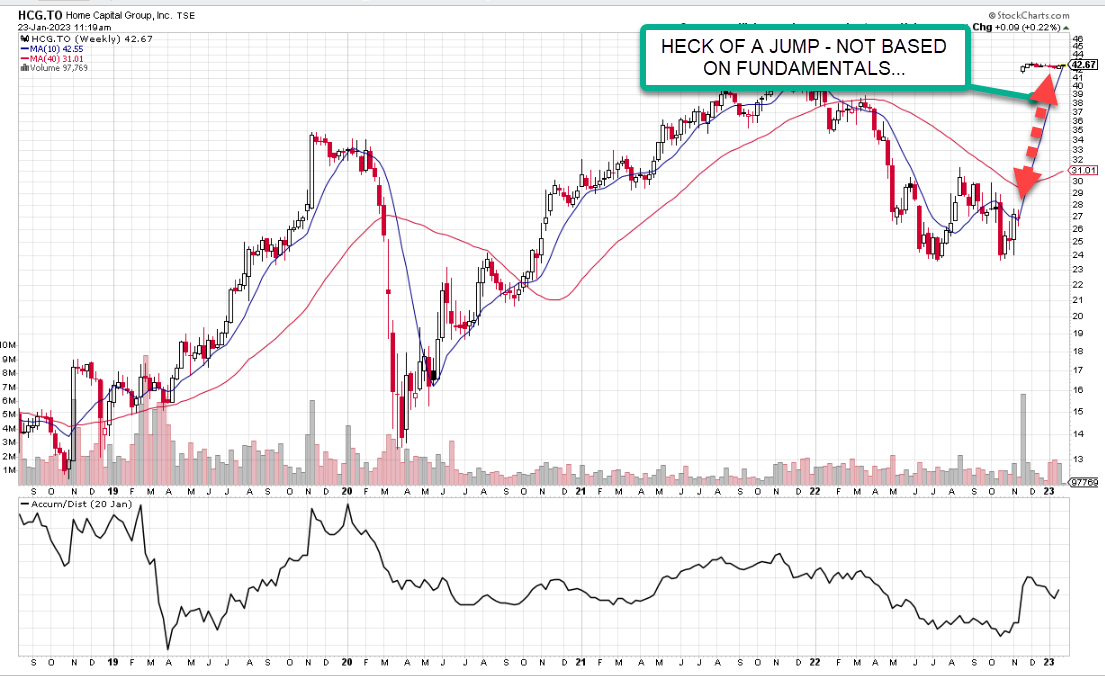 The US real estate market, while slowing, still has some life in it. Americans are not as leveraged, and real estate is not as overvalued as their Canadian counterparts. Where the strongest markets like Toronto, Vancouver, Calgary have suffered recently (and are expected to see further downside), pockets in the USA has seen huge immigration. People from other states and other countries – including Canada – are moving to states such as Florida, Arizona, North Carolina and Texas. This, due to their attractive taxation, business, personal freedom, COVID & Medicare policies. I have property in Florida, and the immigration / housing boom has quite clearly increased – not decreased –  in 2022.  Meanwhile, states with the highest levels of taxation, freedom infringements, and prior COVID restrictions such as New York and California have seen quite massive emigration (out) in 2022. Here is the net inflow/outflow data on US states. Perhaps Canada might take a lesson of freedom and taxation from this chart!

So, while real estate patterns are much more regional in the USA, its more widespread across Canada. Based on debt/capita, housing costs, and income/debt ratios,  its important to recognize that real estate influenced sectors in Canada are likely to underperform those in the USA. Some of the international markets per the Fitch charts above look outright attractive – I noted a few emerging market economies above as attractive.

Bear this in mind when you view real estate investing, or surrounding securities, in your portfolio management.