Home / Canadian Banks may be setting up

Canadian Banks may be setting up

Thackray’s Guide tells us that October is the time to buy the Canadian banks. While the seasonal “sweet spot” for Canadian banks is usually later in the fall, there can also be a buying opportunity in the sector near the end of June.  As the sector sells off into the broader market weakness that often occurs in June – this can be one of the interesting times to consider the financials.

I usually look at the BMO Equal Wt. Bank ETF (ZEB-T) when reviewing the banks. It’s widely traded and is a fair representation of the bigger Canadian banks. The longer termed (weekly) chart of ZEB below shows us that the uptrend for Canadian banks ended earlier this year. I correctly identified the break of this trend in March here.

Officially, there are no signs on the weekly chart that the downtrend has ended. However, the neartermed view (daily chart) below tells us that there may be an opportunity setting up. Let’s take a look…click here for a more detailed version of the chart below. 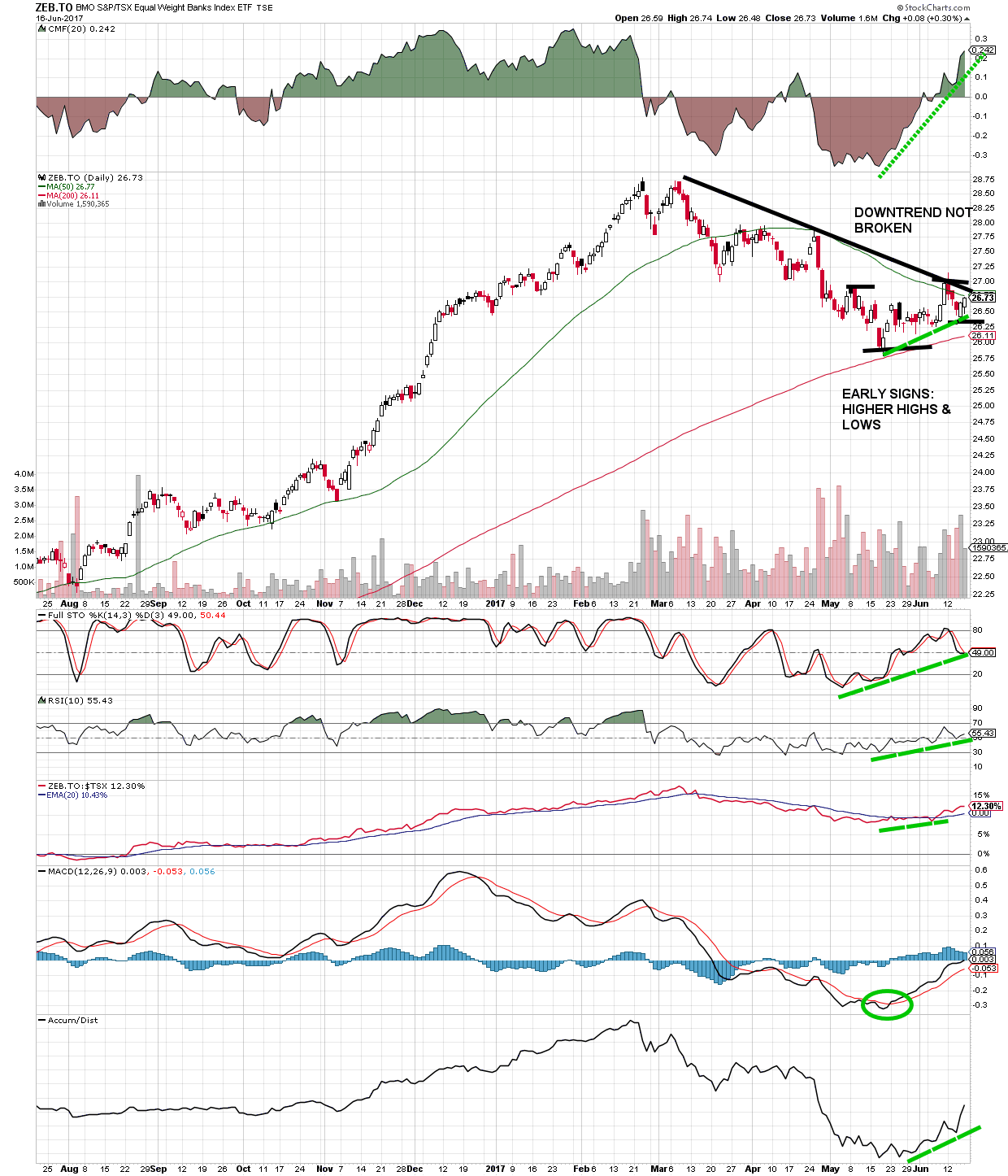 The daily chart shows us a few encouraging signs – despite the fact that the major downtrend displayed by my trend lines has yet to be broken. Note the recent higher highs and lows on the neartermed chart. Note the nice moves for moneyflow (top, bottom panes), the mid-termed MACD hookup, and the generally rising RSI and stochastics indicators. You can also see on the comparative relative strength line (3rd pane from bottom) that the banks are starting to outperform the TSX. This is interesting, given that the TSX is so focused on Energy, materials and financials – with the banks themselves being so dependent on those other two sectors for their wellbeing. We’re also seeing some pickup in volume as the sector makes its first tepid steps towards a potential break of the larger downtrend.

The banks look interesting right now, although ideally I’d like to see a breakout of $27/sh for this ETF. That would prove a break from the downtrend and a takeout of the last significant high on the daily chart. Alternatively, investors happy with the dividend could instead see if the ETF pulls back to near $26.50 as a potential area of support—that’s only about $0.20 cents or so from current pricing. While a pullback to that price area would imply further wait time before a breakout, the sector provides enough dividend income for those who aren’t in a rush for capital gains.