Home / Can you predict the next Redditt stock rally?

Can you predict the next Redditt stock rally?

Last week we held our first “Ask me Anything” Webinar. It was quite a success, and I thank those who were able to attend for their participation. We had somewhere near 80 attendees, and covered many interesting questions! Still, many people were unable to attend, and had asked for a link of the webinar. Here is the link

Long time reader Dave asked an interesting question on the comment section of a recent blog. He asked if Technical Analysis still works, given influence by chat groups on Redditt such as Wallstreetbets. Great question!! Actually, I’ll expand on the question by asking if Technical Analysis can give us a heads up on potential moves.

To address this question, why don’t we look at the charts of 4 of the more notorious stock moves driven by the Wallstreetbets gang. But before getting to them, a brief on how this phenomenon works. The group identifies highly shorted stocks. They target a particular stock by agreeing to buy the stock ‘en masse on a given day or timeframe. The stock goes up on that buying. This squeezes the shorts, forcing them to cover. This covering adds to the buying volume. So the stock goes parabolic.

There’s no question that this group buying action accelerates an upside movement on a stock that would be unlikely if they had not interfered. The question is, would Technical Analysis give us clues to the stock potentially having a move on its own?

As you know, I focus on market phases. A stock that is in a downtrend (phase 4) is assumed to remain in that downtrend until it develops a base (phase 1). The base signals a change from the downtrend. If the stock moves out of the base to the upside, this signals a strong potential for further upside (phase 2). The old downtrend has ended and a likely uptrend has begun if a stock can launch out of a base. Note that a base breakout only occurs when there is a catalyst to do so. Some fundamental news, etc. As such, it provides clues to a potential breakout, should the catalyst appear. Below is a diagram from my book Sideways that illustrates the phases, marked by a 30-week SMA (I actually use a 40 week SMA) 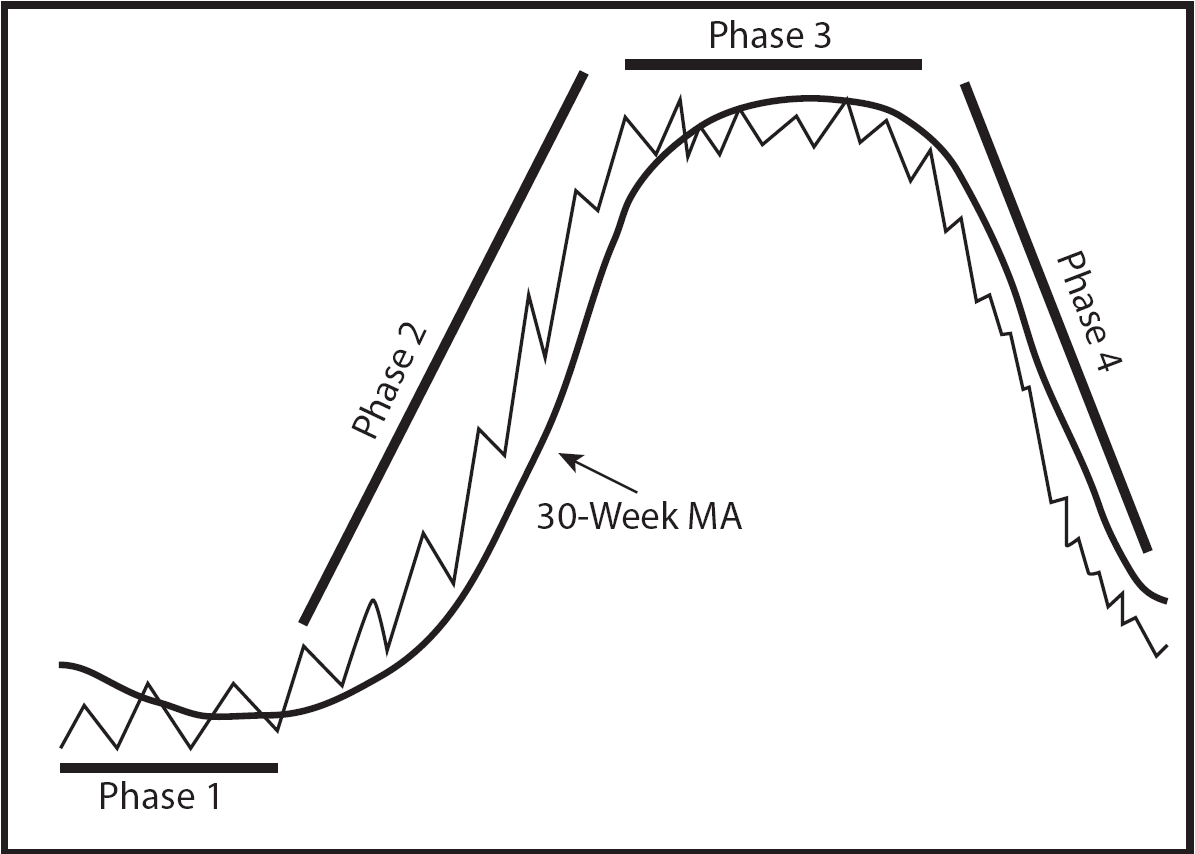 Did the market phase offer clues to the Wallstreetbets setups?

Lets take a look at four stocks, plus the most recent target by the Redditt folks, Silver. Perhaps there are clues to be seen that the market was setting up for.

No doubt that GME was setting up for the move. It needed that push, mind you. The short squeeze was the catalyst. Technicals  certainly did give a heads-up for a potential move, and an entry signal before the Big Boom! Note the test of the trendline, and the bottom base breakout. Either one was an entry signal.

There was, once again, an nice base setup on this Redditt rebounder. Admittedly, the squeeze shot the stock up far too quickly for most of us to buy in, unless you were chancing it by buying within the base.

There is no doubt that Technical Analysis provided all of the heads-up you needed to buy this stock before the Redditt rebound. While you can’t predict a short squeeze ahead of time, you can certainly see that the downtrend ended, the base neckline was broken, and a perfect neckline test occurred. This is classic Technical Analysis. Redditt or not, here we come, breakout! I would suggest that the upside move was probable, and only accelerated by the short squeeze. As an aside, we bought Fairfax (FFH) to play the base break of BB, along with the insurance sector (which we also like). So far it has benefitted.

This squeeze caused a momentary spike in the stock that really hasn’t had much follow-through. There were no clues to the stock being a technically attractive candidate. It has been, and remains, a down trending stock. This, despite the brief mega-spike. So, Technical Analysis wouldn’t have gotten you in, but you wouldn’t have made any money on this stock unless you managed to sell it lightening-fast when it spiked. It dropped so quickly back into the downtrend, there were few opportunities to take advantage of this trade. The setup wasn’t there, and so far, the bearish technical view has proven correct.

We hold about 7% combined exposure to gold and silver in the ValueTrend Equity Platform, and a bit more than that in our ValueTrend Aggressive Platform. We bought silver on a technical signal known as a flag. The chart below shows you that the metal paused after a sharp rally over the summer. From there, it meandered lower to find support near $23/oz. Typically, flags (also called “down flags”) are consolidations. The security will often move back into an uptrend after the formation allows the overbought status of the trade to work its excess. The setup is there for a catalyst to move it. We bought it more for the inflation catalyst. But hey, if the Wallstreetbets gang wants to bid it up for us – well – who am I to argue? A profit is a profit. We will see if this move lasts, or if it fizzles. Either way, we like silver for a longer timeframe.