Bearish sentiment prevails on the stock market, which has driven money into the bond market. Things are getting rather overbought on both Canadian and US bond markets –as illustrated by the XBB iShares Canadian Bond ETF, and the TLT US long bond ETF. Note the overbought momentum studies (stochastics, RSI, MACD), and  the parabolic rise on the chart of late. While we don’t see the indicators rounding over at this moment, it might make sense that we’ll see this excess washed out in the coming days or weeks. Such a movement – especially on bonds – is unusual – and unsustainable for the longer term. 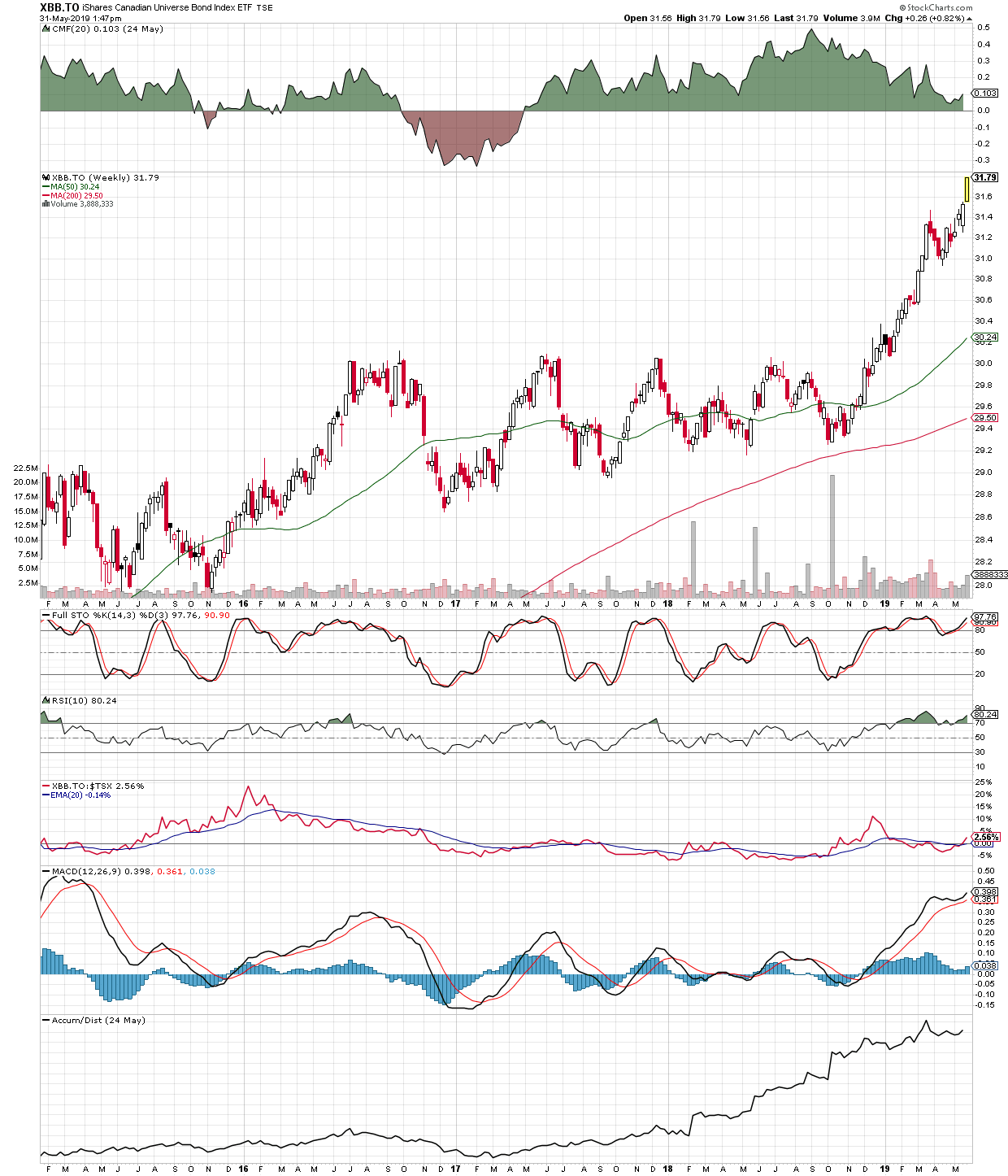 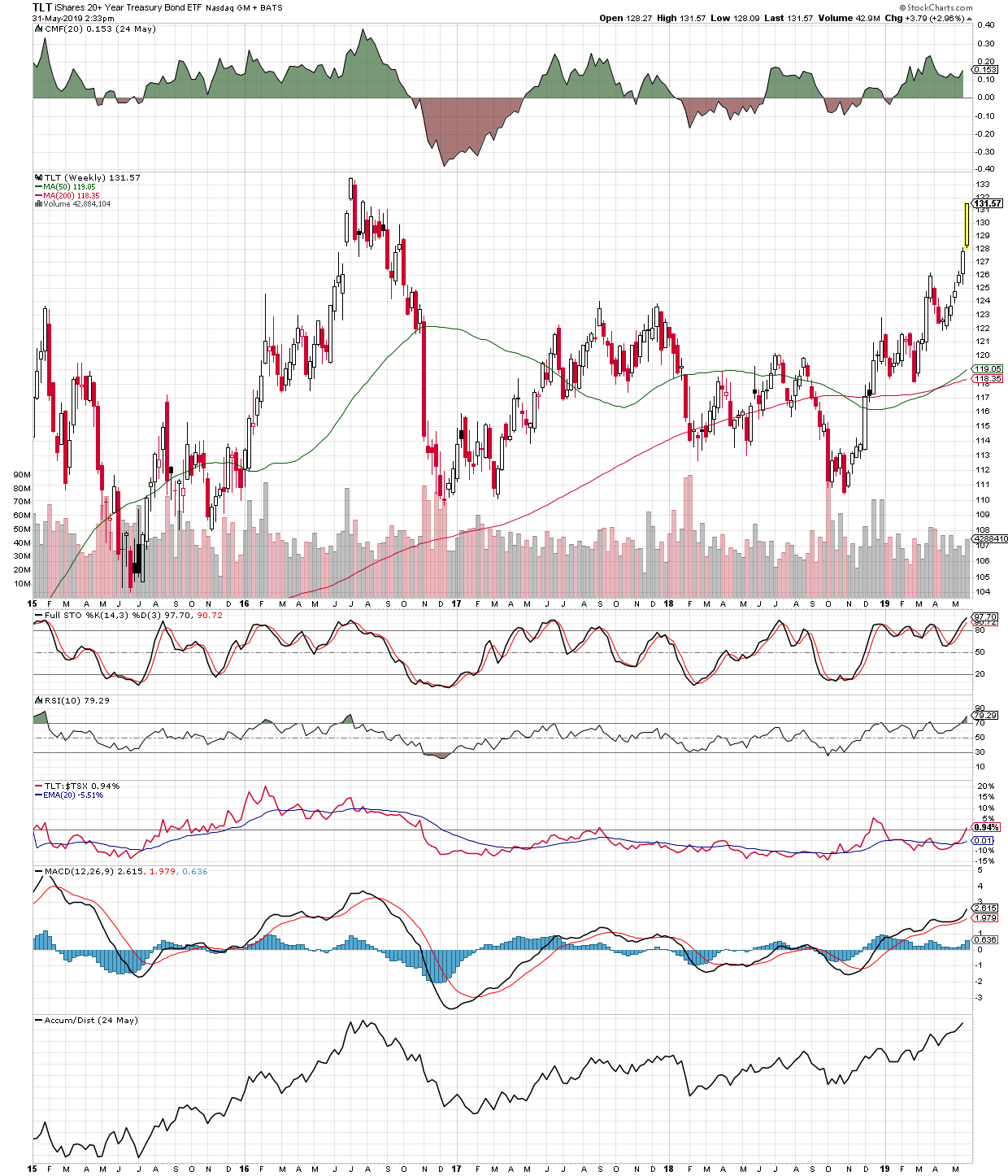 Jason Goepfert of sentimentrader.com notes that the stock/bond ratio is showing a likelihood for the bond market losing ground and stock market gaining in the coming weeks. 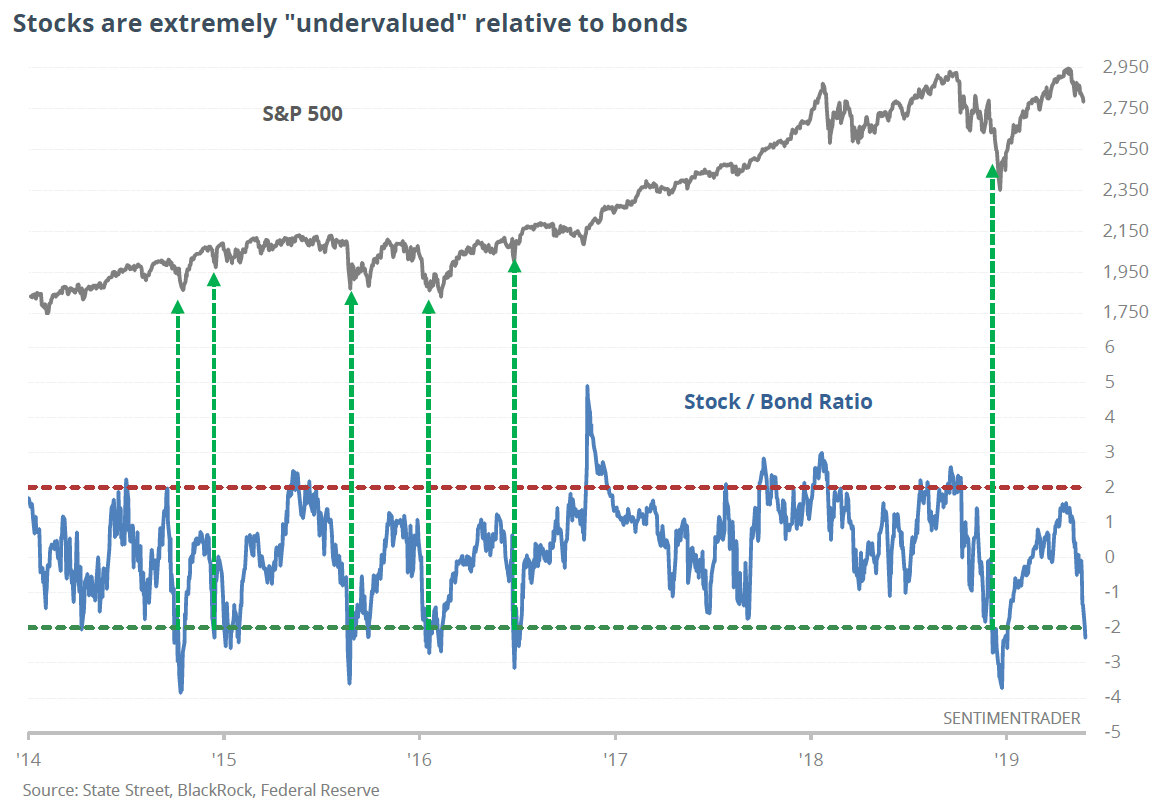 He also notes that the AAII survey of individual investors suggests retail investors (dumb money) are becoming very bearish after the recent 6% market decline. When retail investors become this bearish on stocks after a relatively small decline (as we have now), markets typically follow through with a bit more downside in the following weeks.  But…after that, stocks almost always finish stronger a month later.

Putting these two indicators together (charts courtesy www.sentimentrader.com), it might make sense that we get a little more downside (possibly to my 2600 target) in the near-term. But, this could be followed by strength into late June. The end of June is significant – not just from Jason’s statistics. It’s also the date of the G20 summit. I might suggest that the US/China rhetoric may turn a bit more positive as they head towards that summit. There’s nothing like sending nasty tweets out a week before you have to meet with the guy you’ve been tweeting about. Talk about embarrassing!

Who knows…there may be some plausible market relief coming if both parties begin to sound more positive as they come closer to the summit. And that might just coincidently line up with Jason’s observations of market rallying a month after the signals discussed above. Just thinking out loud here….

Back to Jason’s work.  For those interested, here is his explanation of how the stock/bond ratio is constructed and interpreted:

There are any number of ways to monitor the relationship between the two, but the best we have found is a simple ratio between the S&P 500 and the yield on 10-year Treasury Notes.

This indicator measures the ratio between these two indexes, then transforms it into an expression which shows how extreme it is compared to other recent readings. What we’re looking for are the real extremes – when stocks become “overvalued” relative to bonds, then we often see stocks decline and bonds rise. When stocks become “undervalued” according to the ratio, then stocks typically rise while bonds fall (i.e. yields rise).