Home / Bombardier: Should you add to your position?

Bombardier: Should you add to your position?

You have invested in Bombardier. If you are over 51 years of age, you have been investing regularly in Bombardier since 1966 . Unfortunately, no matter what your age (assuming you have earned taxable income in the past 2 years or longer), you have some of your tax dollars invested in this business – whether you wanted to be involved in this losing investment or not.

Bombardier has been a perennial recipient of corporate welfare, having received more than $3.8 billion (that’s $3,800,000,000 in real money, folks) in taxpayer handouts since 1966. That makes you and I investors in the company. I don’t know about you, but it’s been a pretty lousy deal for my portfolio – especially since it was a discretionary trade on my account. Discretionary trading is something that only licensed Portfolio Managers should be able to do. And this only under a very clear agreement signed by the client. Even then, the diligence, soundness of the decisions and suitability of the investments must be justifiable. Sending money to a losing firm with no equity or income potential and no possible return of capital would be considered imprudent, and would likely land me in trouble had I entered such a trade with my clients’ assets.

Personally,  I’d much rather have had the government send me that portion of my taxes allocated to this perpetually losing company through the shares –even if they have been a disaster over the past 2 decades. You and I have nothing to show – not even a capital loss that we can use – under the current arrangement. Even a capital loss has some benefit – and ultimately a stock that has fallen still has some capacity to return some of your capital. The big downside to your (and my) “investment”  in Bombardier has been that of receiving no dividends and no capital gains or claimable losses. That’s because we didn’t get equity shares in the company or a debt obligation in return for our capital.

Well, let’s take a look at another way of investing in Bombardier. That is, by making a decision whether to own stock in the company that is not forced upon you. The great thing here is, no matter what happens you’ll at least have control on your investments’ entry timing and elimination. By investing in this – or any stock – we might have the potential for some upside – rather than the complete lack of upside no matter what the outcome –  through the last $3.8BB we’ve already invested. 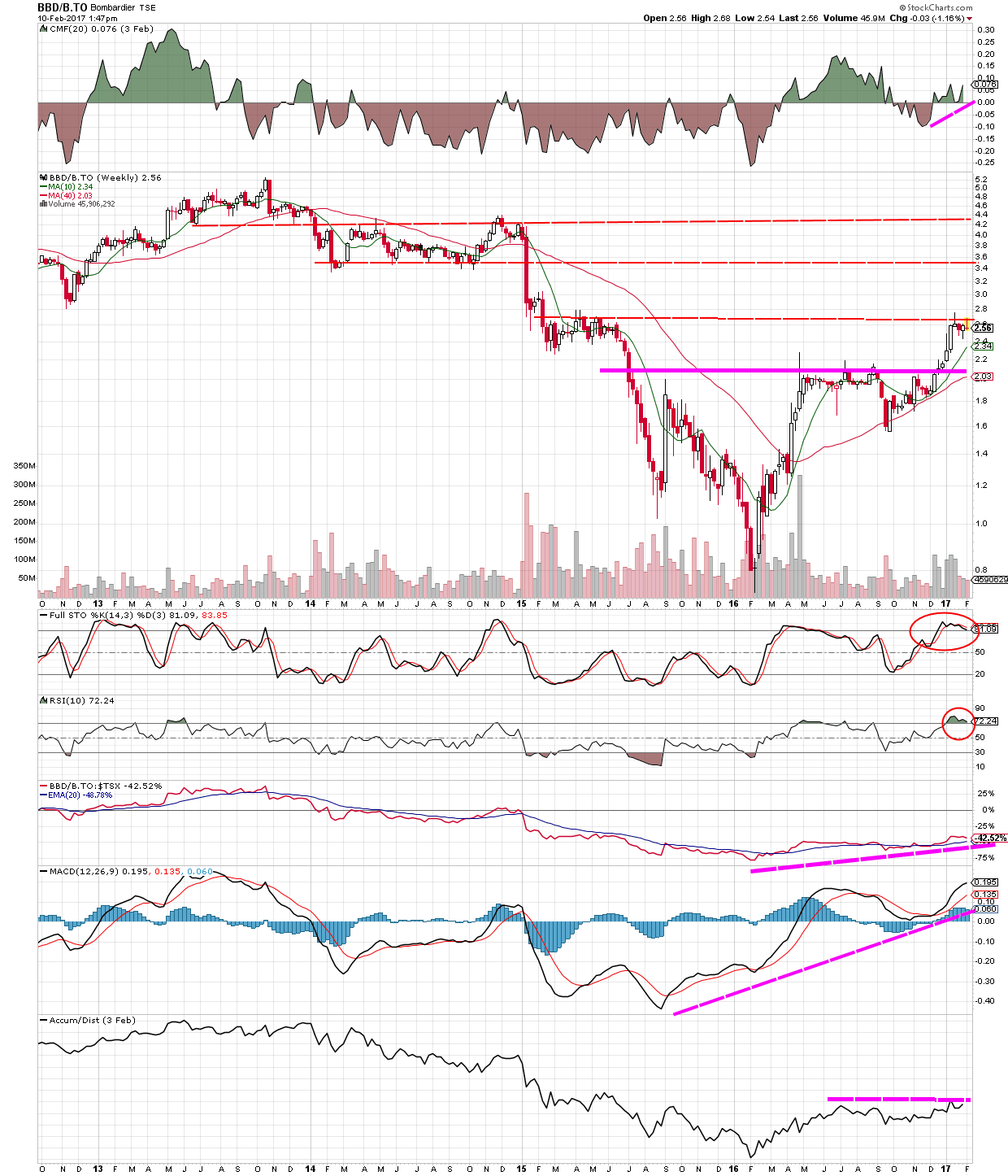 The weekly Bombardier chart shows us some interesting potential in this stock. The stock has put in a potential Head & Shoulders bottom, and looks to be struggling with a current resistance point for around $2.70/sh. Neartermed momentum (RSI and Stochastics) is rolling over, but the longer termed MACD is trending nicely. Cumulative Moneyflow (A/D line bottom pane) is quite flat—but Moneyflow momentum (Chalkins top pane) is turning up a bit – suggesting a possible revival of interest in the stock.

If you wish to invest additional capital  beyond your current non-claimable massive loss in Bombardier, you might wish to consider waiting for the current resistance point of $2.70 is taken out  – preferably on some volume. Perhaps, if the stock moves up from that point, you might be able to recover at least a little of your capital from this otherwise bum deal beseeched upon you. The current government has yet to explain how the most recent “investment” will see the capital returned, given the company’s inability to return prior taxpayer bailouts.