Home / Blood in the streets

Blood in the streets

During the Panic of 1871 in Paris, when everyone was selling, Baron Rothschild was buying. When asked about his buying decision, Rothschild apparently replied that “The time to buy is when there’s blood running in the streets.”

As noted in my “Smell of Fear” blog,  there are some quantitative factors that we can watch for signs of “blood in the streets”. I have collected a number of these “fear-sensing” sentiment factors, along with some breadth and trend factors – and created a broad based indicator that I call the “Bear-o-meter”.

Monday’s blog featured the newest reading of the Bear-o-meter, and focused on some of its individual components that have changed over the past month. My last reading was on October 3rd, when it read an astoundingly low “1”—very deeply bearish. This reading looks to have been vindicated, given the carnage that began literally the next day. I should note that the Bear-o-meter normally doesn’t work that accurately. It is a risk/reward reading – not a market timing program. But, it appears that deeply bearish or deeply bullish readings (e.g. –close to 0, or close to 8) may offer some insight on neartermed moves. My point is, don’t expect that to happen all of the time. I use this system to read potential risk and reward, not to time entry or exits. As you may note from Monday’s blog, the Bear-o-meter reads “4” at this time. That’s neutral. So we are at an average risk/reward tradeoff at this time. That can change, likely to a bullish setup sooner rather than later.

When the blood is running on the streets, we want to start looking for buying opportunities. One sign that the blood is running in the streets is a statistical summary done by Charles Dow Award holder Charlie Bilello. The chart below shows us how markets performed after each time CNBC ran a “Markets in Turmoil” special. Sometimes it’s just too obvious, isn’t it? Thanks to reader “JP” for pointing this chart out to me. 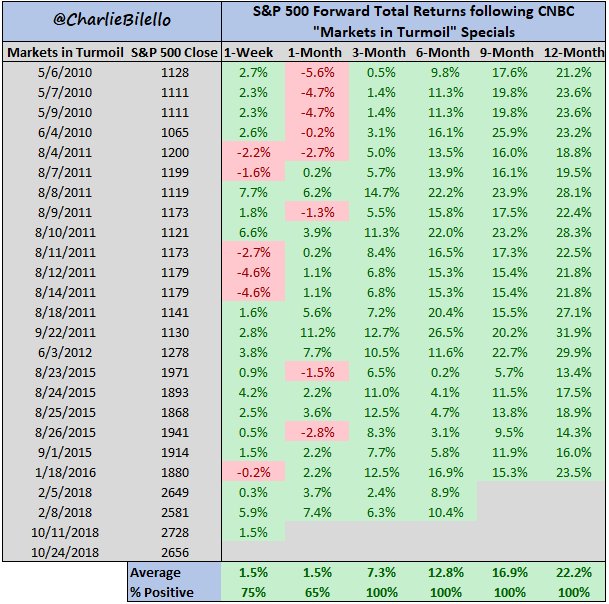 Anyhow…I decided to review four of the dominant sector trends in seasonally favorable groups. They are Technology, Industrials, Financials and Discretionary stocks. All of these sectors are favorable into late winter or spring. So these are not short termed seasonal patterns – they offer a bit of wiggle room to refine your entry point. I’ll use the SPDR ETF’s to illustrate the sectors. Let’s get at it.

The XLK ETF broke a trendline and its 200 day SMA recently. It has not taken out its last significant support low of $62 from February. A move back above the 200 day SMA (currently near 69) would signify a probable reversal of the current dangerous pattern. Watch for that break.

This is one distressed chart. The neckline break at around $71 paints a Halloween-scary picture. I would expect an oversold bounce back to that price point, but the chart shows clear and present danger past that potential. For now, I am inclined to avoid the sector, despite the positive seasonal tendencies.

The financial sector looks to have broken its technical support (neckline) at around $26. Its not so far below that level (as compared to Industrials)—but there is little question of the precarious look to the current chart pattern. If the sector doesn’t rebound back above $26 again shortly, it could be ugly. I’d be wary for now. A decisive move over $26 might change the picture.

XLY broke its trendline and the 200 day SMA. But, it did this in 2016 and still managed a recovery. So I’m inclined to play this like I would XLK. That is, a move back above the 200 day SMA – currently residing around $107 – might inspire me to buy into the sector.

Don’t miss MarketCall tomorrow at 6:00pm. If you call in with a question, mention that you read this blog!