Home / Between a rock & a hard place

Between a rock & a hard place

I’ll very briefly step outside of my world of technical analysis to quote a fundamental analyst whom I have known and respected for over a decade. Craig Basinger of Macquarie recently wrote a research report regarding the potential of a new round of stimulation by the U.S. Federal Reserve.  This week, I questioned him about the likelihood of QE3 actually happening in light of the U.S. super-committee’s failure to agree to a budget solution. Craig reiterated his convictions to me. According to Mr. Basinger, “The table is set for QE3…..unemployment is still at 9.0%, government is in a deadlock, GDP growth was just revised down from 2.5 to 2.0, and no more dissenters in the Fed voting committee.”

Some financial commentators have noted the declining impact on the markets of the Fed’s stimulation packages. QE1 & QE2 were driven into action by low inflation reports. These programs injected liquidity into the economy and markets, had a positive impact on stock prices, and drove inflation temporarily back into the desired 2.5-3% level..This summer’s “Operation Twist” (the selling of short-term treasuries and buying of longer term treasuries) was approved and then enacted in October after the Fed expressed concerns of sub-2% inflation. I probably don’t need to tell you that, beyond a brief rally that ended recently, stock markets have not yet shown any positive impact from Operation Twist—no doubt hindered  by the current circumstances surrounding Europe. This does not preclude the potential of a new round of “money printing” similar in policy to QE1 & QE2 to add upside to the stock market.

Back to the technicals. There are a number of sentiment and momentum studies that suggest that any spark of good news (such as QE3) in either the U.S. or Europe could initiate a stock market rally.Let’s take a look at the bullish and bearish market indicators for the markets at this time. Please click on the chart below for details as we walk through these factors:

The bearish breakdown of the triangle noted on this blog lead the S&P 500 to penetrate technical support of 1220 on Monday November 21st. I noted on last week’s blog that if the penetration lasted more than 3 days, it would have to be considered legitimate (rather than just a temporary “spike”) and should be considered bearish for the markets. I confess that, while I felt a penetration of support likely, I also was convinced it wouldn’t last more than a day or two. At the same time, the S&P broke down through its 50 day MA (blue line on chart) and really doesn’t have much support until 1120 (the former market bottom that was tested in August and early October). Further, a failure by the markets to rally over the normally seasonally strong the pre-Thanksgiving day market (Wednesday) suggests that the bears are firmly in charge at this point in time. Blood is running on the streets. 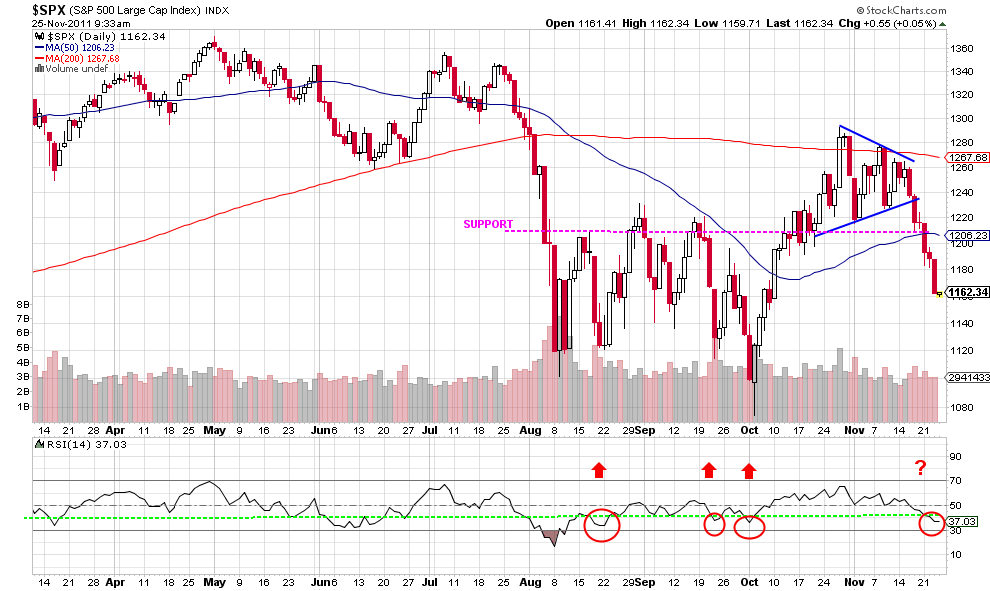 There are a number of sentiment and momentum indicators that suggest markets may be approaching an oversold condition, and very near a rally point at this time. For example, the number of S&P 500 stocks that are trading below their 50 day moving averages is “intermediate term” oversold at around 21% according to Don Vialoux (www.dvtechtalk.com). Further, an oversold sentiment indicator for the NASDAQ (the NDX “Down Pressure” indicator) hit 90 recently. This has historically led to higher markets in the following week 9 of 11 times. A favorite of mine, the ISEE call/put sentiment indicator has shown 3 out of the past 5 trading days at the oversold level of below 80. A cluster of trading days at or below 80, when combined with an oversold momentum indicator such as RSI has been a highly reliable market bottom indicator (this is an area I have studied extensively, and wrote a research paper for my CMT designation on many years ago). The RSI-14 day indicator has not yet reached a “traditional” oversold level of 30 (it currently sits around 40). However, a drop below 40 by RSI did signal the August 19th and October 3rd retests of the S&P’s 1120 August 8th bottom (see chart above). Having said that, RSI originally reached the mega-oversold level of 16 when it put its original bottom in on August 8th. This type of reading for RSI is pretty rare, so I will suggest that we should watch for a more traditional reading of 30 (or just below that level) if the market does not bounce within the current conditions. Seasonal factors should still be bullish for the markets over the coming months, and the last two weeks of November have historically been bullish more often than not.

One cannot ignore the recent break by the S&P 500 through its 1220 support level. Sentiment indicators and momentum indicators are oversold enough to justify a rally, but not quite yet at a level that would inspire me to be highly confident of the strength or propinquity of that occurrence. Thus, at the risk of sounding wishy-washy, this is a market that must be watched each day for its signals. Whether one should add hedging strategies to one’s portfolio, or to relax and watch the market rise over the coming months will be answered by how well the market holds over its August – October lows.