Home / Been there. Done that.

Been there. Done that.

Goldman Sachs hiked their 2013 target for the S&P 500 from 1575 to 1750, now that the market has reached their original target. Having worked for a large US brokerage in the past, I am familiar with this mentality of chasing a higher and higher targets as markets move upwards.  GS’s “valuation adjustment” was done because of “the extremely low interest rates” (as GS’s analyst David Kostin explained). Interesting that GS would raise their market target based on this rather old fact, given that interest rates have been at the same level for over 4 years now. While I remain a bull, I will say after 24 years of stock market investing – it has been my observation that the big US brokers are not always your best source for target accuracy or timing. My old firm had a 15,000 target for the DJIA for the year 2001. While that level was finally hit 12 years off projection (this year), their enthusiasm was more than a little inaccurate from a timing perspective.

Last Wednesday the S&P hit 1687 intra-day before reversing and closing lower on the day. The candlestick for that day looks like a bearish engulfing  formation. I believe that this may be the beginning of the much needed market correction within the bull market. Further, my newly introduced compilation of indicators known as the Bear-O-Meter -more on this below- suggests a slightly higher than normal risk/reward level now. A downside of between 1600 (50 day MA and first support) and 1550 (next support) might make sense for the S&P. For those who hold cash, this may become an excellent buying opportunity.

Welcome to the ValueTrend Bear-O-Meter.

This simple device reads risk levels on the U.S. S&P 500 stock index. Its purpose is give advance indications of potential bull market conditions, or conversely, to warn in advance of potentially bear market conditions. I put this model together simply as a way to review a collection of the indicators that I’ve been using over the years in one quick glance. This indicator is NOT a near-termed model. Instead, it is a macro indicator that provides insight as to the risk/reward potential for the US markets. While I will not disclose the specific indicators and parameters of those indicators that are used in each category, I am happy to list its major components, and their weight within the indicator.

The Bear-O-Meter is scaled from 0 to 8. A low rating suggests a high risk vs. reward scenario – stocks may be starting to become a more risky investment. A high rating indicates a high reward vs. risk potential. Again, the readings are not short-termed timing indications – traditional chart and indicator analysis is more adept for our short termed decisions. Instead, the indicator should give us some “colour” as to the risk vs. reward levels present on the markets at any given time. Looking at the indicator over the past 13 years, it read:

The Bear-O-Meter reads 3 at this time, which is neutral to moderately bearish. Risk is entering into the markets. I will endeavor to post this meter periodically as the reading change in a meaningful manner. 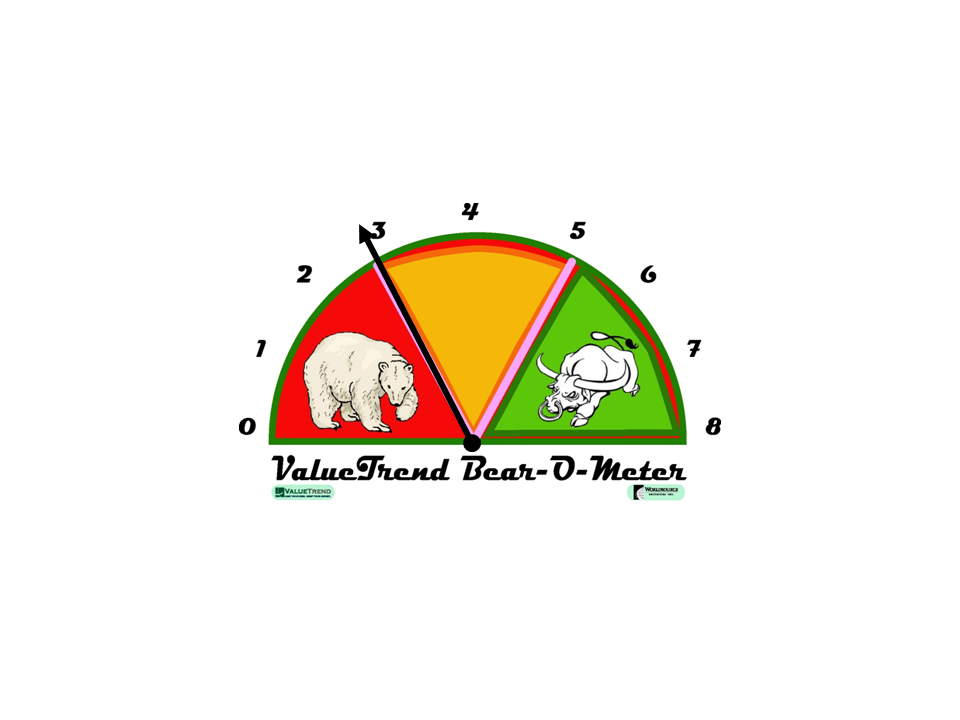