Home / Bearish on the loonie

Bearish on the loonie

As you can see, I’m motivated to make this call right for two very good reasons!!

Since a late 2017 peak, the loonie has trending down. I called that peak correctly in late 2017 on this blog.  I’m still bearish on the loonie for technical, and fundamental reasons. Today, we’ll look the technical side first. Then we’ll look at a fundamental factor that adds to my bearish loonie projections. Of note: those who get offended by political commentary may not appreciate my fundamental comments. They surround government policies and the potential repercussions regarding our economy and currency.  Yes, we are coming into an election, and my timing of these thoughts – although not at all new (aka my 2017 bearish call) does tie into this election. For good reason.  I feel that the current administration and policies is harmful to our dollar, and our economy. I won’t be getting into a debate on this blog over these observations. If you are one of the remaining fans of the PM’s – I’d encourage you to just read the technical thoughts below and avoid the comments below the charts.  Or skip this blog altogether. Let’s get on with it.

Seasonally, the C$ tends to peak in September and decline through most of the winter – where it begins to pick up steam again in the spring and summer. Jon Vialoux’ s seasonal chart illustrates this tendency. As with most seasonal tendencies, they are averages – not precise measurements. This year, the loonie had its summer rally peak in late July rather than the projected seasonal peak in September. Close enough. 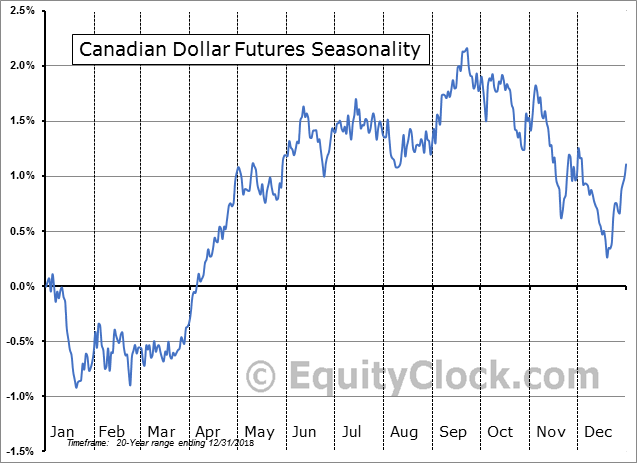 After a brief lower high from an early September spike, the loonie is now well on its way to continue following the bearish trend channel noted on the chart below. Should the loonie fall to the bottom of that channel, it might target to around $0.72 in the coming months. I think that’s a real possibility. My fundamental reasoning for this thought is below. 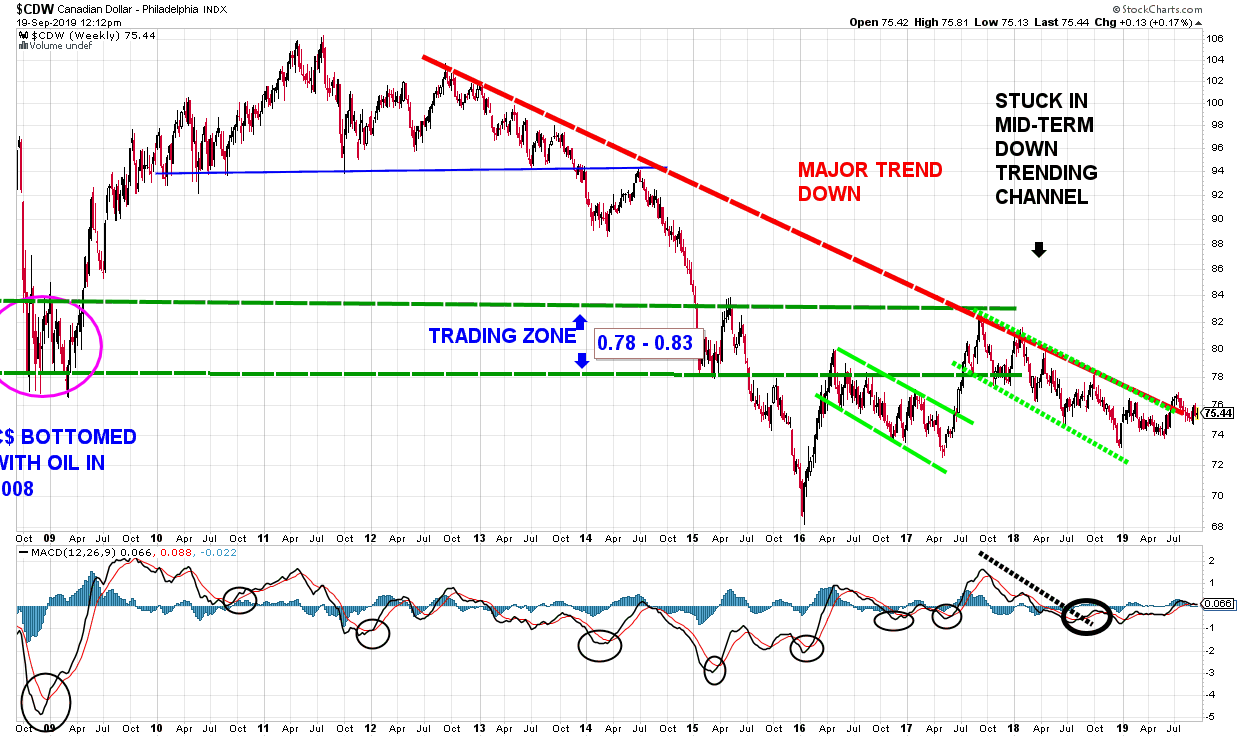 Much of the following commentary was taken off of various research pieces and website articles citing the numbers. I give full credit to Diane Francis (National Post) for much of the economic comments. “Canada’s GDP grew as of July by only 0.9 per cent. By comparison, the Americans’ GDP grew by two per cent. A report said that Canada’s economy lost 24,200 “net” jobs in July, the second month in a row with job losses, and the unemployment rate rose to 5.7 per cent. But the figures are misleading. That month, 69,300 private-sector jobs were lost, and the “net” figure was derived from subtracting the creation of 17,500 public sector jobs and an increase in self-employment by 27,700.

Who counts self-employment as “jobs”? Arguably, another 27,700 self-employed people are those who have lost their jobs and hope to support themselves somehow. In August, a report said Canada “gained” 81,000 jobs, but two-thirds, or 57,200, were part-time.”

Meanwhile, household debt is the highest in the world in developed nations. Canadians are leveraged 266.5% debt / GDP. Canadian households are levered enough that a continuation of our employment realities may put pressure on the current consumption habits. A government who ignores the reality of the economics behind its largest contributor to GDP (energy!) is unlikely to improve this precarious debt and employment situation anytime soon. Unemployment problems mean debt repayment problems. A bad economy means a weak dollar. This ain’t rocket surgery.

It’s not just household debt. The government is spending its way into a precarious position as well.

“No Canadian prime minister has spent more money (per person, inflation-adjusted) or accumulated more debt (per person), outside a world war or recession, than Prime Minister Trudeau,” estimated the Fraser Institute in April. Canada’s gross debt will increase this year by almost $120 billion (again, adjusted for inflation) since the previous government tabled its last budget in 2015. On a per-person basis, each Canadian has acquired $1,725 more in federal debt since Prime Minister Trudeau took office,” the think tank added.

Did you know that the creation of Canada’s federal office of the Conflict of Interest and Ethics Commissioner can be traced back to Prime Minister Justin Trudeau’s father, former prime minister Pierre Trudeau?

Ironically, his son is the first and only PM in Canada’s history to be charged by the Ethics Commissioner! In August, the Ethics Commissioner issued a damning report that the Prime Minister breached ethics rules by trying to suborn the legal system on behalf of SNC Lavalin. That wasn’t the first time Justin Trudeau had been charged with breaching ethics. He accepted the gifts of hospitality from the Aga Khan and the use of his private island in March and December 2016, while there were ongoing official dealings with the Aga Khan, and the Aga Khan Foundation Canada was registered to lobby his office.

Having learned from his past two ethical breaches, the PM’s office quickly and silently settled a third breach of trust when they lost the trial against Admiral Norman – something that Norman’s lawyer called “more troubling than the allegations that the Prime Minister’s Office tried to intervene in the criminal case against SNC-Lavalin.” The PM’s office covered up this third breach so efficiently and silently that most Canadians are not even aware of it. I simply cannot see how these ongoing ethical breaches can do anything but add a level of concern in the international investment community, along with our trading partners. Lack of trust in a government can pressure international trade, and ultimately our economy. It certainly cannot help.

Given that this is a financial blog, I’ll avoid discussing the “other” ethical issues surrounding the PM at this time. Nuff’ said. 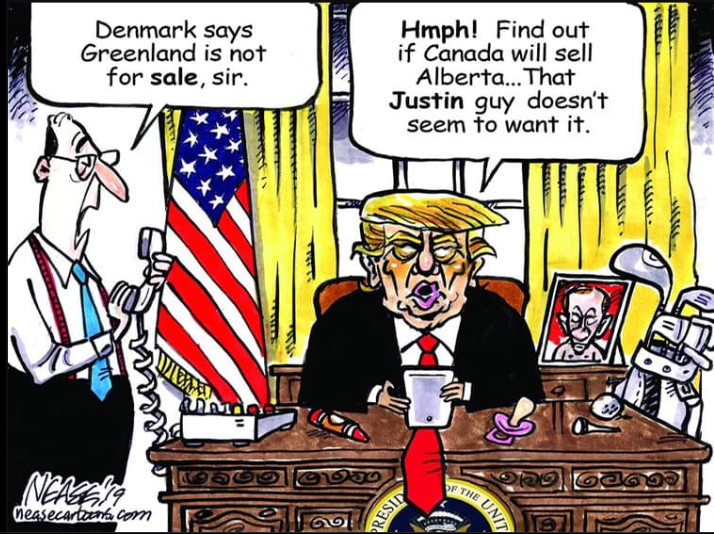 Finally – an unfinished Trans Mountain pipeline – which you and I took off the hands of Private Corporation Kinder Morgan for a mere $4.5B.  KMI were more than willing to finish the job but for the bumbling of the government through the approval process. The project remains unsold, unresolved and a horrible investment for our CPP fund—something that still sits with me as breaking the fiduciary duty  (is our CPP there to bail out the government on bad decisions – or is it to invest in pension quality investments….?). A true representation of the issues surrounding government decisions around our energy industry, hence the challenge to our economy and dollar. And that’s just one of the challenges this government has created for this industry.

I’m bearish on the loonie for technical reasons. I’m terrified of the negative effects on the C$ chart brought on by 4 more years of taxing, spending, and ethical breaches. For this reason, I am happily long the USD and plan on adding to my USD exposure with the cash I hold in lieu of the seasonal buy period (October).

Thanks to all who showed up at my presentation at the Moneyshow. A number of people indicated they read this blog. Nice to have you out! 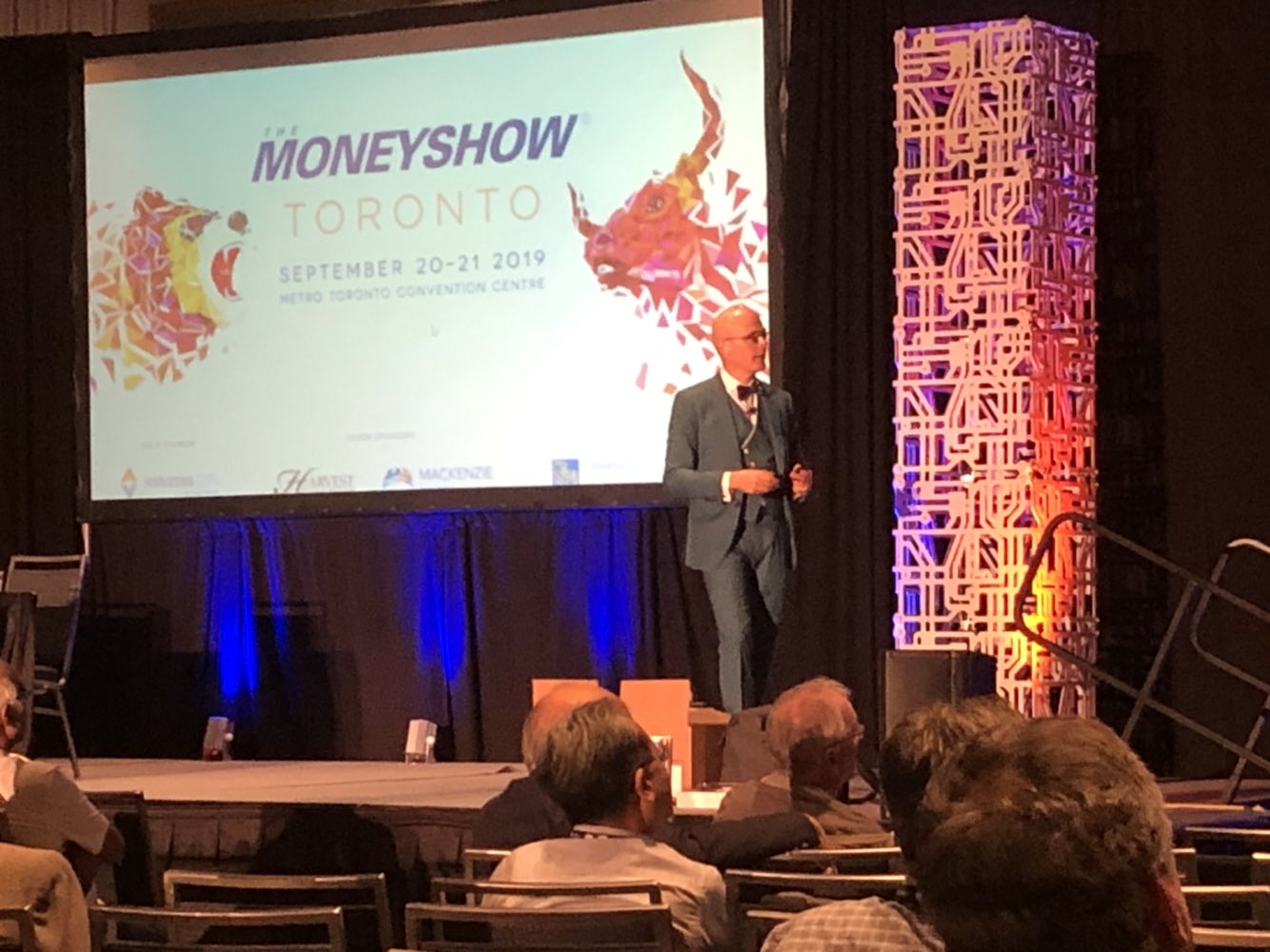