Last months Bear-o-meter read neutral. The reading of “4” on July 2nd put the score at an even distribution between risk and reward potential. Most of the time, the Bear-o-meter reads somewhere in the neutral zone between 3-5. Turns out that was a decent call, given the fact that the market headed higher that month, with just a bit of chop.

Right now, the Bear-o-meter has moved into a more cautious zone. Its moved down to a lower reading of “2”. You’ll note on the diagram below that a ranking of 2 suggests more risk than reward potential at this time…all things being equal. Hate to sound like a broken record, but…this isn’t a crystal ball system. The current low score shows us that, all things being equal, risk is outweighing reward at this time. Markets always have risk, and always have reward potential.

In order for markets to materialize that risk when we get a low Bear-o-meter score, you need a catalyst. Perhaps the fed stimulates less in the next round, offsetting market hopes. Perhaps a leading tech stock disappoints or has government push back. Who knows? The point is, the low rating of 2 on the Bear-o-meter simply shows us that the conditions are more risky than normal. It does not imply that markets will absolutely decline in the coming weeks. As the signs at my cottage said in July: Avoid making a campfire until conditions return to less risky. Such a policy helps us avoid risk of forest fires.

Where did the Bear-o-meter lose 2 points?

The CBOE Put/Call ratio fell from 0.83 on July 2nd to 0.67 on August 8th. My break-point for the Put/Call ratio is for it to fall below 0.75 for a bearish signal. Such a ratio implies that put volume represents about 67% of total option activity. While you normally do see more calls than puts being traded, my research suggests that less than 0.75% of put activity represents an over-emphasis on calls by option traders. Sentiment is overly biased to the long-side.

The other indicator in the Bear-o-meter compilation was the Smart/Dumb money indicator.

Some investors make better decisions as a group than others. For example, institutional investors and commercial hedgers are on average more “correct” in their market outlook than are retail mutual fund, ETF investors and stock traders. The value of the smart/dumb indicator is that it pits these two groups and looks for extreme divergences in opinions. I use the sentimentrader.com smart/dumb compilation to make my assessments.

When the ratio of smart/dumb optimism falls below -0.25, we start to get into irrational exuberance territory. Right now that ratio sits at -0.39, meaning that dumb money is about 60% more enthusiastic about the market outlook as is smart money. Note on the chart above that this condition could last a few months, and could even get deeper into the “bullish dummy” territory. But it basically never stays this skewed forever.  This is a bearish sign. 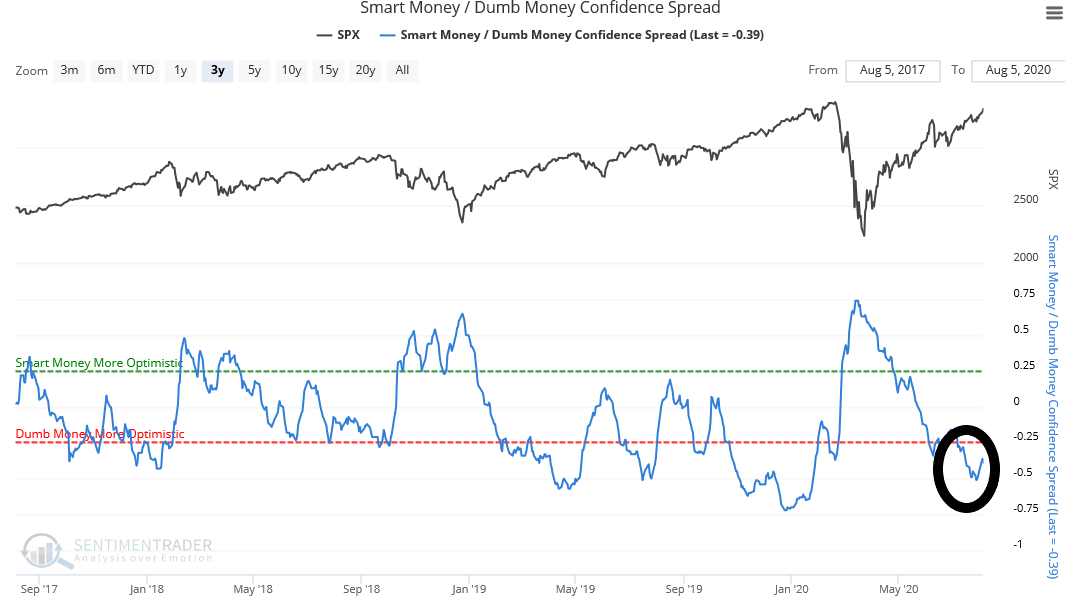 Consider avoiding risky stock market bets in the coming weeks, and stick with more conservative strategies. Traders might even want to take some risk money off the table.