Below is a chart of the Bear-o-meter signals since 2019. Back in the earlier years readings were taken roughly quarterly. As such, the signals noted were far apart.  I found the quarterly readings to be too tardy compared to my current monthly readings. Since doing the monthly inputs, I have found the system to be more robust in guiding our cash/beta adjustments.

Important: The Bear-o-meter isn’t a market timing tool. It simply measures risk. It uses tools that I have incorporated separately in my decision making regarding cash and beta over many years. The Bear-o-meter simply puts the macro technical indicators I like in one spot and assigns a zone of higher risk, neutral, lower risk stock environments. The chart and its indications don’t mean we acted in the way we would upon a trend or support level break. If support breaks on a stock we sell. Bear-o-meter signals don’t work like that.

For example–a sell signal doesn’t mean that we went out of the market. We held stocks even when the signal went red. Instead, we put a bit more emphasis on lower beta stocks, and/or raised a bit of cash by selling high beta stocks. It didn’t mean we were “out” of the market.

On the chart, you will see the following:

Important: a move from RED to BLACK means we buy stocks again. Neutral (black) is not an outright low risk signal. It does imply that market risk has been reduced.

This year, the Bear-o-meter was quite valuable in our decision making. For example, it went neutral in November of 2019. This caused us to hold a wee bit of cash into the New Year (10% or so). Obviously, that wasn’t as ideal as a high allocation of cash coming into the COVID crash, but it did suggest that the environment wasn’t full-bore bullish. So we acted accordingly.

After the crash, there was a bullish signal in March, followed by a neutral then bearish signal in April and May. We retained some cash and sold one of our (then) 4 tech stocks. In July, it went back to neutral, then bearish in August. These less-bullish signals were driven by the same indicators that caused concern in April – poor market breadth. It was all about the FAANGs and stay-at-home stocks, and my system recognizes this as an unhealthy environment. This, despite the bullish trend. We raised a fair chunk of cash in August by further selling beta and technology. We then began to systematically re-deploy that cash into value and re-inflation names.

The neutral and bearish signals from the Bear-o-meter did not inspire us to exit the market aggressively this summer. Instead, we rotated beta (sell tech, buy value). Again, the Bear-o-meter is not a market timing tool. Its a risk tool. You have to apply some deeper analysis to determine your actions based on that risk. In this case, we did not perceive the overall markets to be risky. We perceived the FAANGs, etc.,  to be risky. Had the Bear-o-meter signaled bearishly in a more diversified breadth environment, our actions would have leaned towards raising more cash rather than sector rotation.

I hope this makes sense. Anyhow…lets now look at this months reading!

As you can see above, our reading on November 2nd was a bullish “6”. Sure enough, the market had a pretty good month. This month, we have another “6” reading, which is bullish. This surprised me. But then again, the last few days saw some solid selling. Last week, almost every sentiment indicator was bearish. Smart/Dumb money below remains bearish. 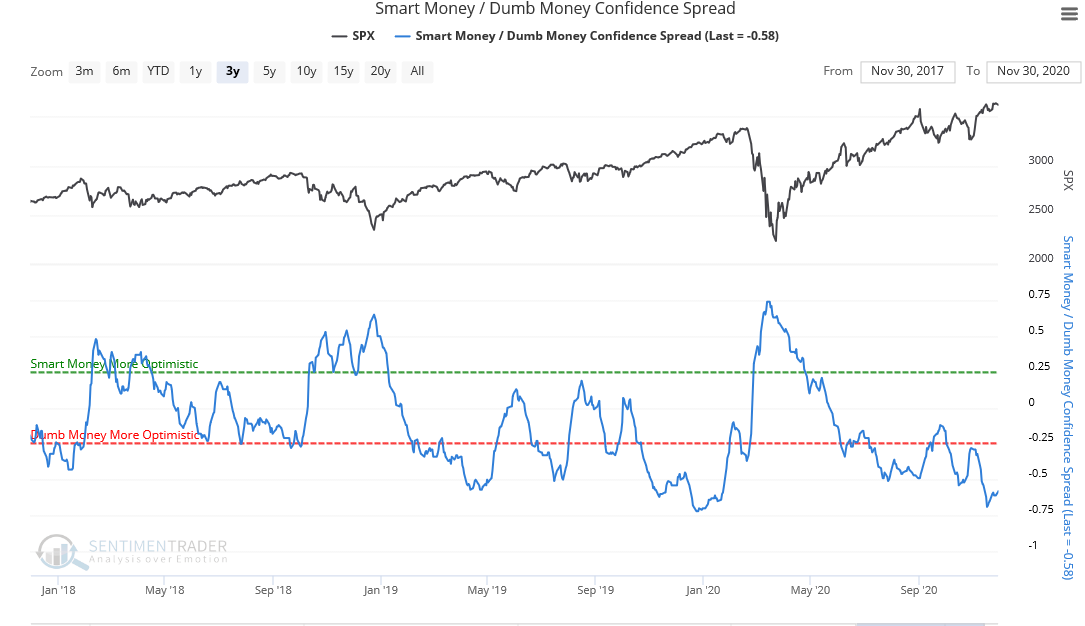 The CBOE Put/Call ratio reversed from an EXTREME bearish level last week into neutral. Were this reading taken just 3 days ago I would have assigned another negative point to the compilation.

Breadth momentum paints a mixed picture. I don’t use the % stocks over the 200 day indicator in my compilation, but its well past the overbought point. I do use the % stocks in the SPX that are over their 50 day SMA  – I use 85 as my overbought level. It is officially still neutral at 83.5- but barely.  Still, I had to give this one a neutral rating in the compilation despite the fact that its on the cusp of being negative. See the chart below:

We have another bullish reading of 6 on the Bear-o-meter. Unlike the November reading, a few of these indicators are on the cusp of signaling negative. In fact, they would have assigned a negative reading just a week ago. But, it is what it is. Given the “barely positive” readings on some of the indicators, I will say that the market remains relatively low risk, but very subject to change. Keep an eye, but stay in the game seems to be this months message.