For those who follow my blog with some regularity, you’ll know that the Bear-o-meter is a risk/reward measurement tool that I’ve been using since 2013. Prior to the creation of this tool, I was using many of the 12 components independently to measure the relative attractiveness of market conditions. These components are nothing new to Technical Analysts. They simply represent the factors that I have found over the years to be helpful when assessing whether to be aggressive or more conservative when investing.

The 12 factors are spread amongst those headline groups, and a score between 0-8 is assigned. A low score (0-3) is considered higher risk. That’s where the market was on my last reading in early January, when it had moved to “3” from a neutral score of “4” the month before. The timing of that lower score seems fortuitous now. We did move more into cash based on that signal. It might be noted that a score of “3” is not aggressively bearish, so we only moved 12% into cash. Again, this isn’t a crystal ball system. It was merely showing us that, all things being equal, risk was outweighing reward. At the end of the day, in order for markets to materialize that risk, you need a catalyst. And baby, did we get a catalyst in the Coronavirus. Very nasty situation.

On Friday’s BNN show (link here), and on last weeks blog, I noted that I would post the newest Bear-o-meter score on Monday. Well, its Monday. And boy have things changed since last month. But for the better. At least from a market risk perspective.

The Bear-o-meter has scored a 7 out of a possible 8 in its risk -outlook. That is pretty screamingly bullish. Here are the factors that changed the score by a whopping 5 points since last month:

Value: SPX P/E score has moved from neutral to bullish, adding 1 point to the compilation

Trend: The SPX moved below its 200 and 50 day SMA’s. That gave the compilation negative scores.

Sentiment: This was the biggie. Smart/Dumb score went positive. As did the VIX score, giving us a very bullish score when it hit 40 on Friday. 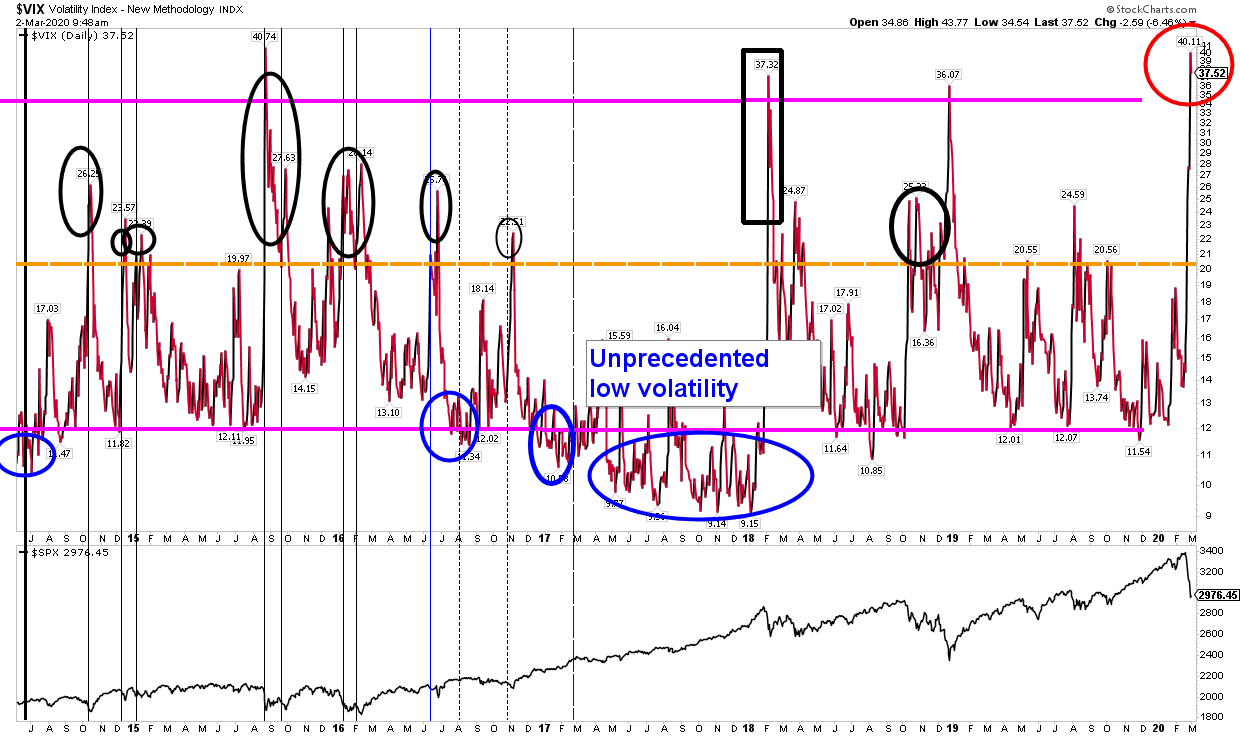 Put to call ratio also moved into the “fear” zone – that’s good for a positive point.

Breadth momentum: Both the New High/Low and the % of stocks > than their 50 day SMA’s went oversold, providing 2 points to the compilation.

I might add to this reading that on Friday, we saw a Hammer Reversal Pattern. This doesn’t necessarily mean an immediate turnaround (although it often does)! But it does indicate a certain degree of washout. I recall in 2009 we had a few of these candles that lead us near the bottom. The hammer basically shows us that the selling in the morning was taken out, to a large degree, by smarter money in the afternoon.

We’re darned close to the bottom now. We may back and fill a bit, but I don’t see another double digit selloff. It may be choppy, there may be a few percentage points (or not) left in the selloff. But to me, everything looks pretty positive. I plan on legging in, a bit at a time as the market proves to hold support. Friday’s low did test near the 2850 zone that I noted on my last blog. Lets see if that holds.

The next Webinar features ValueTrend Fundamental Analyst Craig Aucoin, CFA. He will discuss how we tie fundamental factors in with technical factors in selecting stocks. Link to sign up for the webinar here.

Our last webinar on how to discover and trade breakout-stocks is now available online. Here is the link.