The Bear-o-meter looks at trend, breadth, seasonality, sentiment and value. Last month, I noted that the indicator sat at “1” on a scale from 0-8., where 0 is bearish/ high risk, and 8 is very low risk!

The indicator remains at a cautious “2”. Yes, the market rose over May. This helped add a few points. Trend indicators incorporated into the model (moving averages) went from negative to positive. It also got good marks for some breadth indicators– but not all of them. Sentiment became overbought since last month. All in, the positive scores given to the better trend and cumulative breadth indicators were cancelled out by the worsening breadth-momentum and sentiment indicators. I’ll highlight the stand-out indicators in this compilation in my summary below.

Breadth indicators paint a mixed bag for the Bear-o-meter compilation. For example: The cumulative Advance/Decline (AD) line, which I recently noted recently as flat, is now playing catch up with the S&P 500. This gives it a positive score. The INDU/TRAN (Industrial vs. Transportation stocks) indicator is also neutral.

However, breadth-momentum scores were less favorable.  The big change was in % stocks over the 200 day SMA. This is actually not part of my model, but its interesting to see that the level of this indicator has gone from outrageously low (which is actually bullish) back in March, to bullish by May, and is now approaching overbought/ bearish (although not there yet). I view a level between 30 to 70 as “normal” for the market. That is, 30-70% of stocks on the SPX should be trading above their 200 day SMA. When its below or above those levels it can indicate an oversold or overbought market. In March it went below 10% stocks above their 200 day SMA’s-very oversold. This was only beat by March 2009’s low level of 2%. Its now around 68%. This is healthy, but getting a wee bit high. Here’s the chart just for sticks and giggles:

While I don’t use the % of stocks over their 200 day SMA indicator as part of the model, I do use the 50 day version. You can see its massive move down in March. I use an 80% overbought, 20% oversold level on this indicator. As one might expect, its now overbought at almost 98% of stocks in the SPX > their 50 day SMA. This is a neartermed negative for the Bear-o-meter.

Sentiment indicators present a mixed bag. The VIX sits in the “neutral zone” at 27. My rules dictate a level of 35 as oversold (too much fear) and 12 as overbought (complacency).

However, the put to call ratio is very overbought. Its at the same level it hit before the 20%+ correction in 2011. It tends to show moments of extreme (overdone) optimism. Now would be one of those moments. Market participants ask: “Why buy a put when the market only goes up? “. Put/call chart below.

Smart/dumb money confidence spread provided by Sentimentrader.com tells us that dumb money is complacent while smart money is nervous. This indicator just entered into negative territory at -0.32. Note that it can get a whole lot lower before it signals a “sell”. Nonetheless, I take it as a negative to the market outlook at current levels. 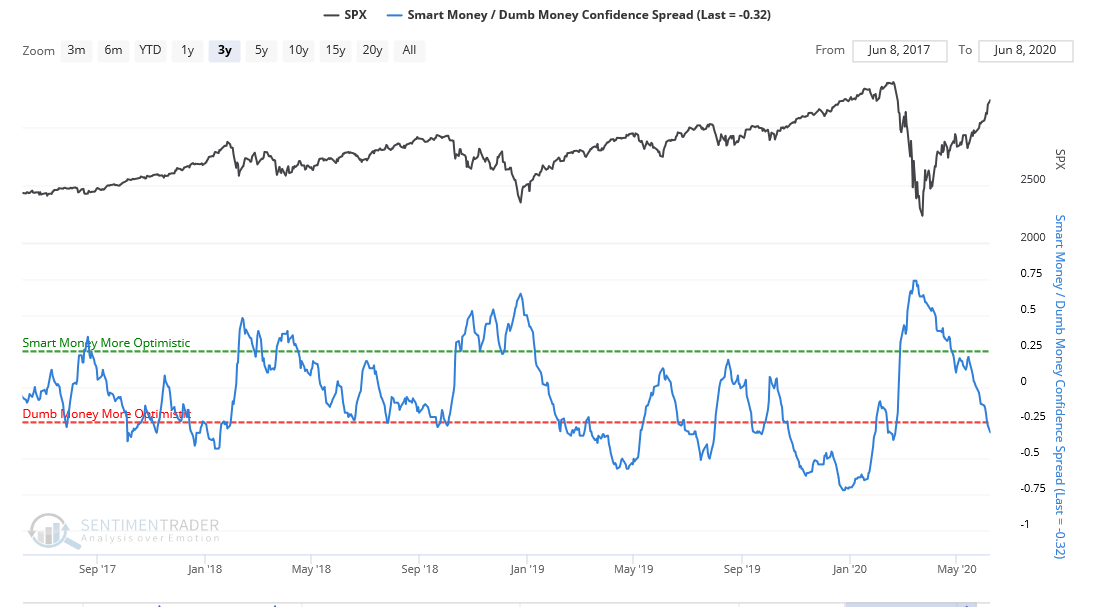 I’m holding some cash. I’ve been wrong in doing so thus far, as have some of the better Portfolio Managers out there – noted here. It doesn’t make me feel a whole lot better to be missing out on some of the action alongside better minds than my own. But it helps a little.

As I have noted in the past – you need to follow your system. Otherwise, you become a slave to emotion and the daily headlines. That’s something I don’t want to do. You have to decide what’s best for you.