In June, we saw the Bear-o-meter flash a largely flat reading from its prior neutral reading in May. The indicator went from “4” in May to “3” in June.

My, how things can change. We’ve seen a pretty dramatic move by the Bear-o-meter. Its flashing very, very bearish “0” right now.

What this means is that, all things considered, the market presents more relative risk than it normally does. Keep in mind that markets ALWAYS have risk. And they ALWAYS have upside. Bear-o-meter readings are a relative relationship between the two. Todays “0” reading suggests higher than normal risk. But its not saying that markets will unquestionably fall. The risk of a decline is higher than the potential for increase – but either scenario is still in the cards. Let’s examine why the Bear-o-meter is reading so negatively at this time.

The big changes were those in the sentiment and breadth departments. As noted on this blog – we are seeing a divergence between the movements of the Dow Industrials and Rails. Rails are diverging – meaning they are not confirming the new highs on the Industrials. This suggests a break in the Dow tenet that the averages must confirm each other . That’s changed from early June, where they were both in sync.

Next, we see that the number of new highs vs. the number of new lows for NYSE stocks are indeed healthy – but they are “too healthy”. In other words, we have too many stocks on this broader index making new 52 week highs. This is more of a momentum problem than a breadth problem – given that you actually want broad market participation. However, as one of my clients once said – you need to be worried when there are “too many happy faces” in a crowd of investors. Sooner or later, some of these stocks gotta give back.

Speaking of “too many happy faces”- you really don’t want to see too many happy dumb-investor faces (retail, mutual fund, and small-lot traders) at the same time as you see too many concerned smart-investor faces (institutional players, commercial hedgers, large traders). And that’s what we have going on right now. Smart/dumb money (www.sentimentrader.com) has moved from neutral to bearish recently. I will point out that this indicator has typically gone deeper into the red zone (too many confident dummies vs. smarties) before markets turn negative. Note the deeper levels seen before the drop earlier this spring, and that of January 2018. 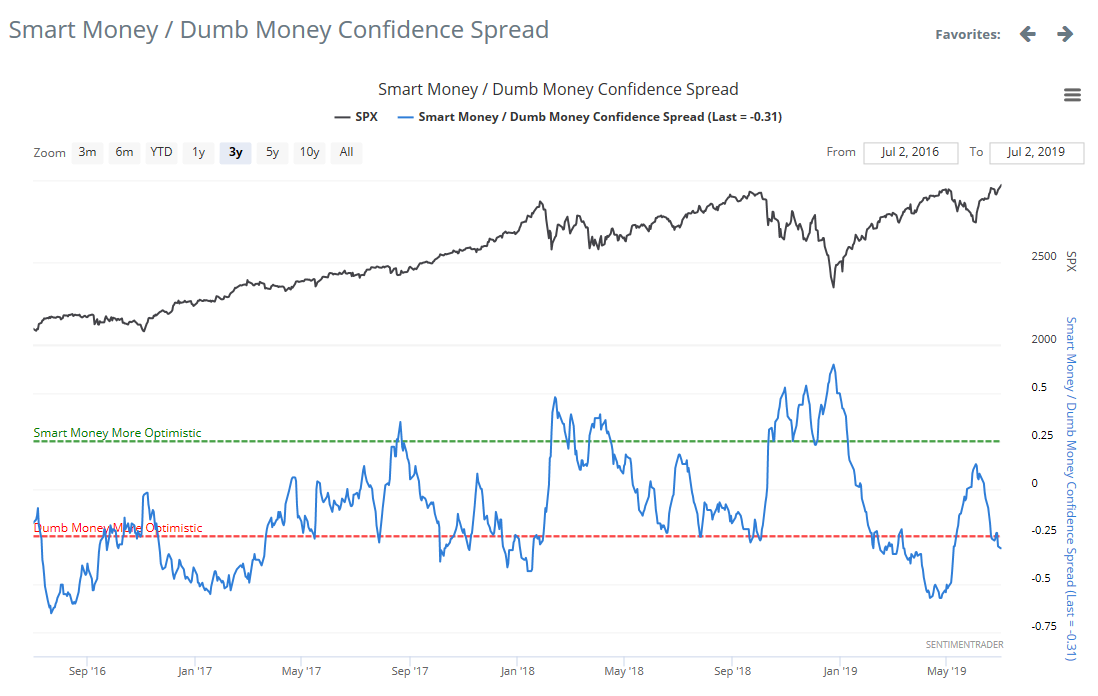 I’ve gotta stick with my program here. Right now, there are a few more signs pointing towards risk. For that reason, I am looking to raise a little more cash and hold defensive securities. Sentiment may need to get a bit deeper into the red (ie markets may have to rise a bit more), as noted above, before anything happens. But all in, the environment is less attractive than it was just a month ago. Caution might be advised.