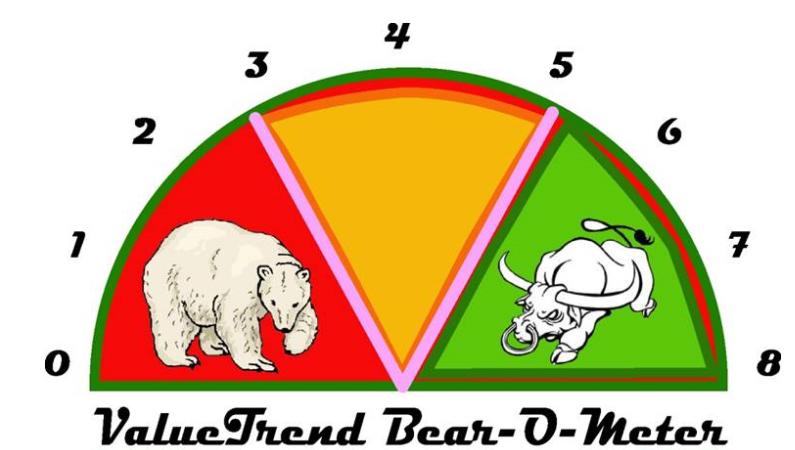 Bear-o-meter scores go from 0 (high risk) to 8 (low risk)—and that score is divided into 3 quadrants representing higher risk, neutral, or lower risk. The illustration above is self explanatory. Note that a low score doesn’t imply that the market must go down. It just means the market has greater risk of going down than normal. A high score doesn’t mean the market must go up. It simply means the market has greater potential to do so, all things considered. Neutral means that risk reward is roughly balanced. At the end of the day, nobody knows what the market will do in the future. But the Bear-o-meter does help give us a relative risk/reward reading at a given moment.

In my last Bear-o-meter reading, the score was “3”—which is a low-neutral to borderline bearish. From that point, the market did fall quite a bit. So its cautious stance was warranted.

Currently, the Bear-o-meter rating is a very cautious “1”. This does not mean that the market will fall. It does mean that if it climbs, it does so in a higher risk environment. For this, and other reasons I have raised my cash level recently.

Of note – the main changes from last month’s readings are: a positive score as the market moved above its 50 day SMA, a neutral score (formerly positive) in smart/dumb money confidence spread, a negative score (formerly positive) as the % of SPX stocks > 50 day SMA went into slightly overbought territory- per the chart below. All other factors remain the same from December’s ratings, but it was enough to lower the overall score by 2 points.

All in, I’d look for some type of pullback in the next little while. That might push some of the negative scores into positive territory and create a more neutral investment environment.

Keith speaking this Friday at the Orlando Moneyshow

I’m speaking at the Orlando MoneyShow on Friday February 8th. Click here to read the details, and for free registration, should you be in Orlando on that date. I’ll be in Florida this week and half of next week.  I’ll do my best to post my blogs and answer your questions, but there may be delays on those posts and replies.