Home / Banks vs insurance stocks: Which should you own?

Banks vs insurance stocks: Which should you own?

On Monday, I posted a sector performance evaluation offering current rotational trends into, and out of the major sectors of the market. One sector that I noted as showing an uncertain pattern of rotation was the financial sector. In the blog, I noted that patterns observed in the performance charts is only the first step in making buy/hold/sell decisions in these sectors. I emphasized that we need to take a deeper dive into the seasonal’s, along with the charts of the broad sector, then of the charts of its sub-sectors and/or largest individual holdings. A step-by step process on how to do this is covered in my Technical Analysis Course. Today, I’d like to do some of the initial steps I normally take – with an eye on the financials.

To start, we need to know that the financial sector contains 12 subsectors. They are roughtly devided into 4 significant sub sectors, further divided into 12 more granular subsectors. They are: Banks (regional, national), Insurance (Life, Full line, Reinsurance, Property/casualty, Brokers), Investment (Asset managers, Investment service), and “Other” (Consumer finance, Specialty finance, Mtg. finance, Financial admin). As I noted in my blog on sector rotation, you need to dig deep to uncover what is actually moving the larger sector. This can be done by looking at these sub sector charts and / or the largest stocks within the sector. Many sectors, such as technology, are weighted most heavily and thus influenced most by a handful of stocks.

Because most investors tend to focus on large banks and insurance stocks when looking at the financial sector, I will pay attention to these sectors today. I will look at US and Canadian banks and insurance companies. US banks are beginning to report their financials this week, starting off with JP Morgan. The stock is down as I write – perhaps a sign of what’s to come for the sector? Charts will tell the true story. Below I post the 10-year seasonals and the charts for banks and insurance on both sides of the border- along with brief notes.

US Banks 10 year seasonals and chart

Clearly, there are negative implications from the seasonal patterns for banks until July for the US banks. Even then, the odds of good performance do not increase until October. 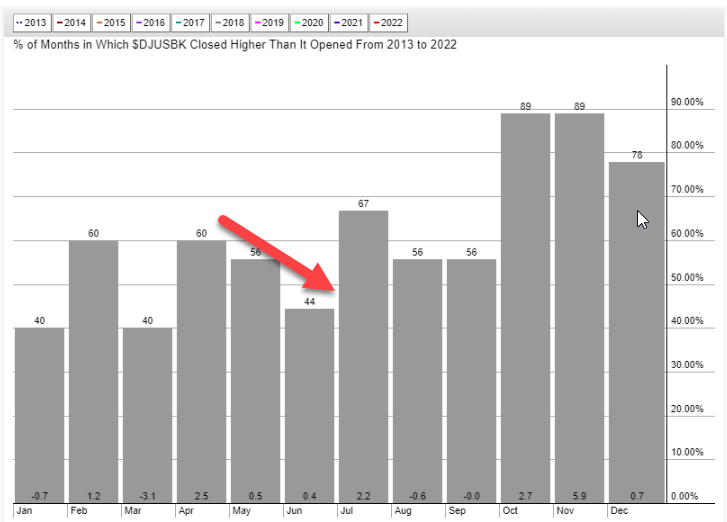 US banks are breaking down. 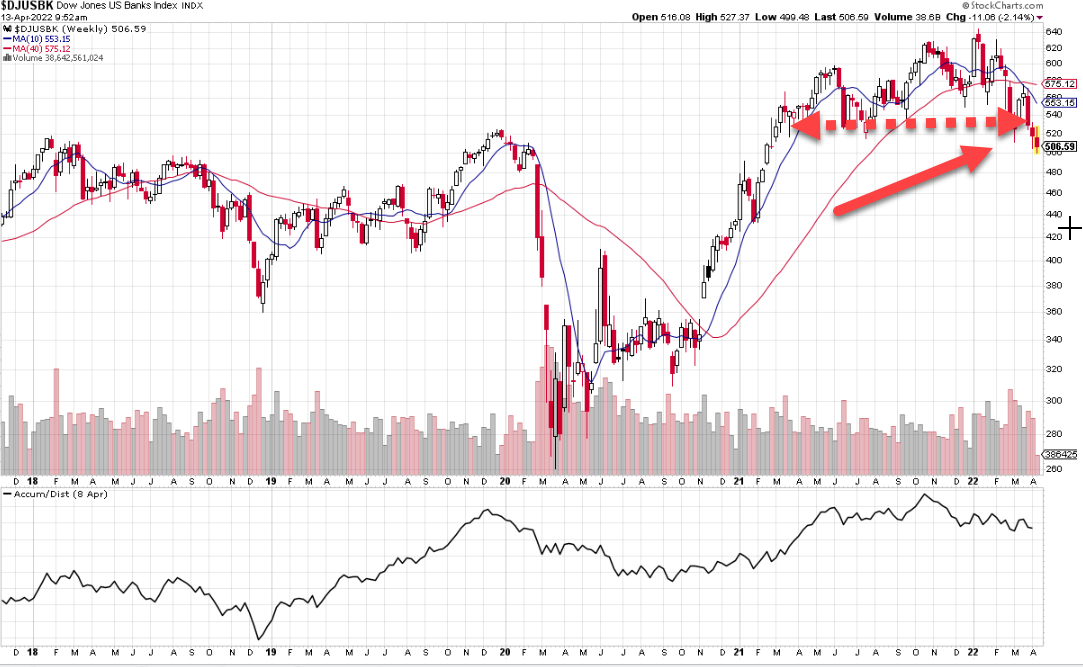 US Insurance 10 year seasonals and chart

US Insurance stocks can be seasonally strong until August. A weak fall (August and September) can lead into a very strong rally into year-end. 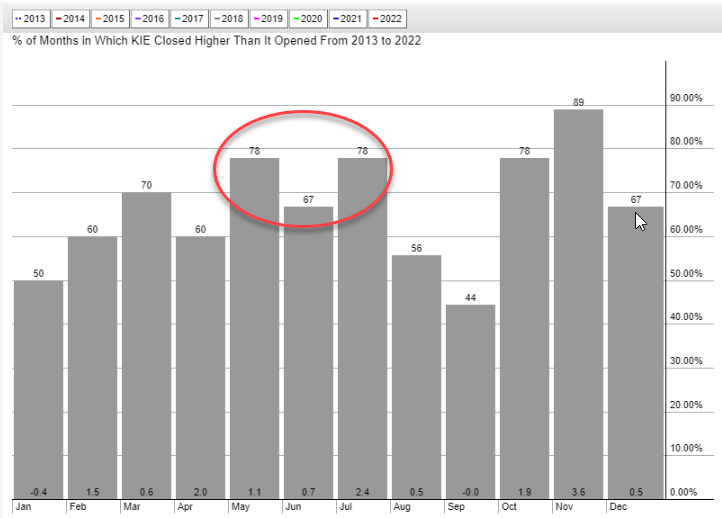 The US insurance chart suggests a bullish breakout. This matches the seasonal pattern for the sector at this time of the year. 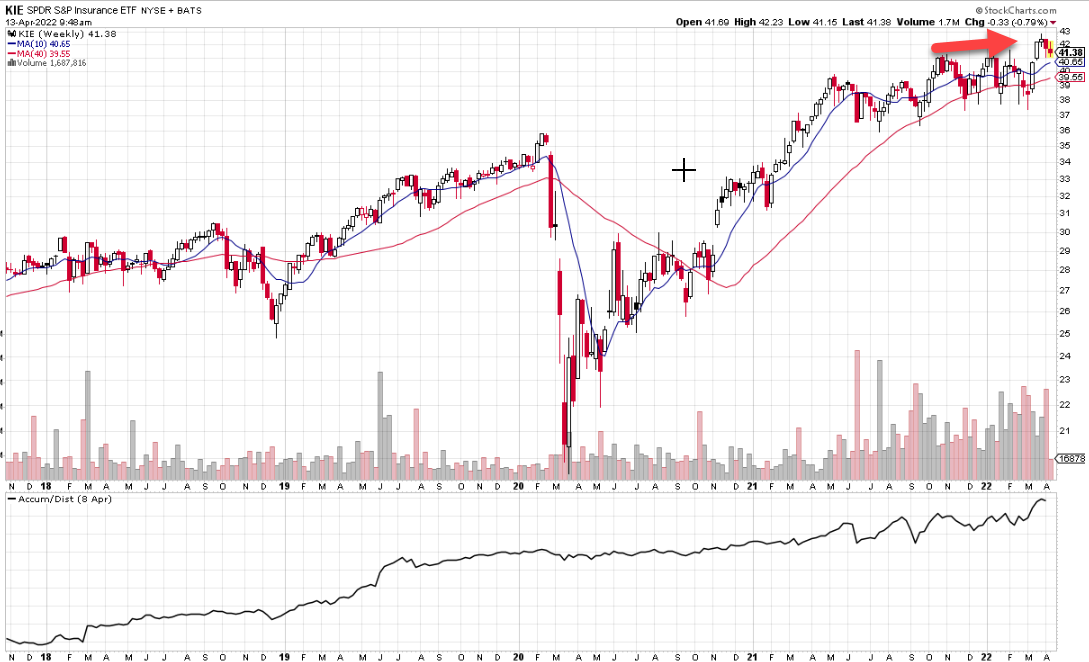 Seasonal patterns for the Canadian banks can be weak in late spring/early summer. However, July to year-end can be bullish. Right now, seasonals suggest weakness for the coming months. 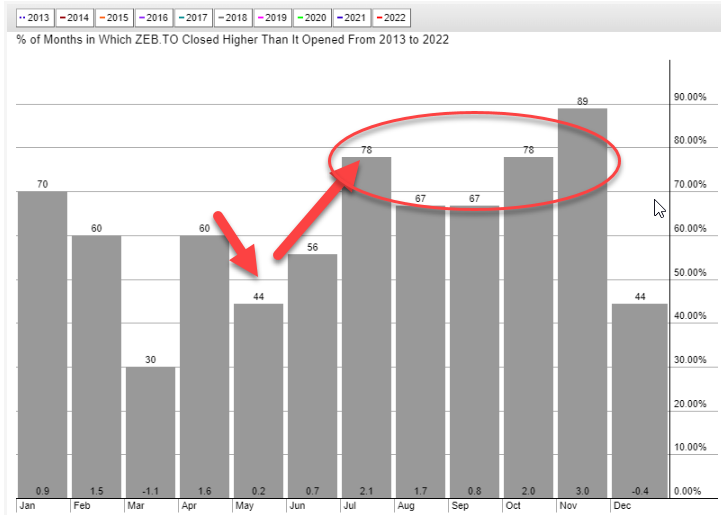 The Canadian bank chart (ZEB) is breaking its trendline and recent support. The next test will be if the 200 day SMA is cracked. Note: we have a position in this ETF. 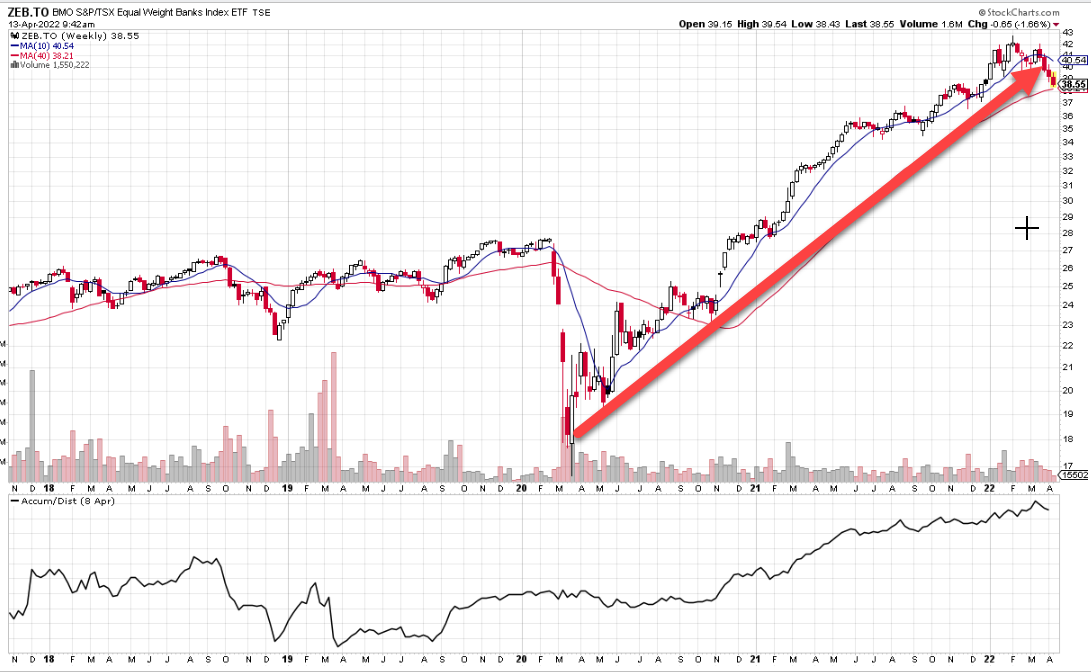 There is no CDN Insurance ETF or index. Our insurance industry is pretty tightly concentrated through a few big names, such as Sunlife (disclosure: we hold this stock), Manulife (disclosure: we hold this stock) and Great West Life. Truthfully, the charts of the CDN insurance stocks tend to shadow each other to a large extent. So I’m just going to use GWO (which we don’t hold) as the poster-boy for the sector here.

GWO seasonals are dead-flat over the summer, after a teeter-totter pattern between April and May. 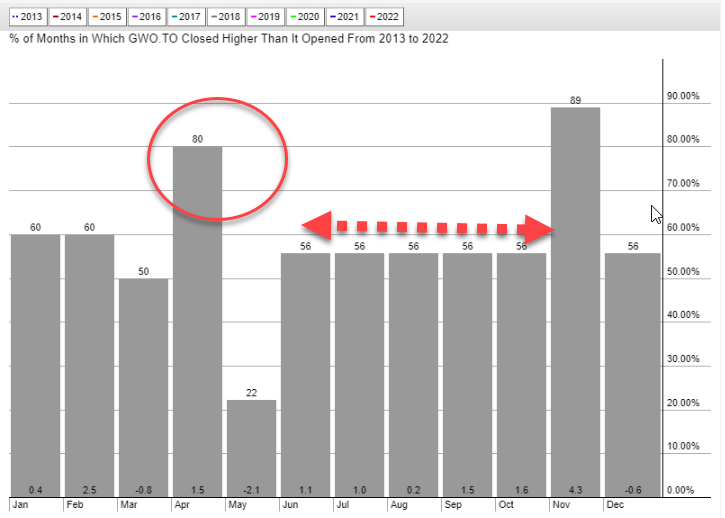 The GWO chart is moving sideways, much like the other major Canadian insurance stocks Nothing to see here, folks. Move along. 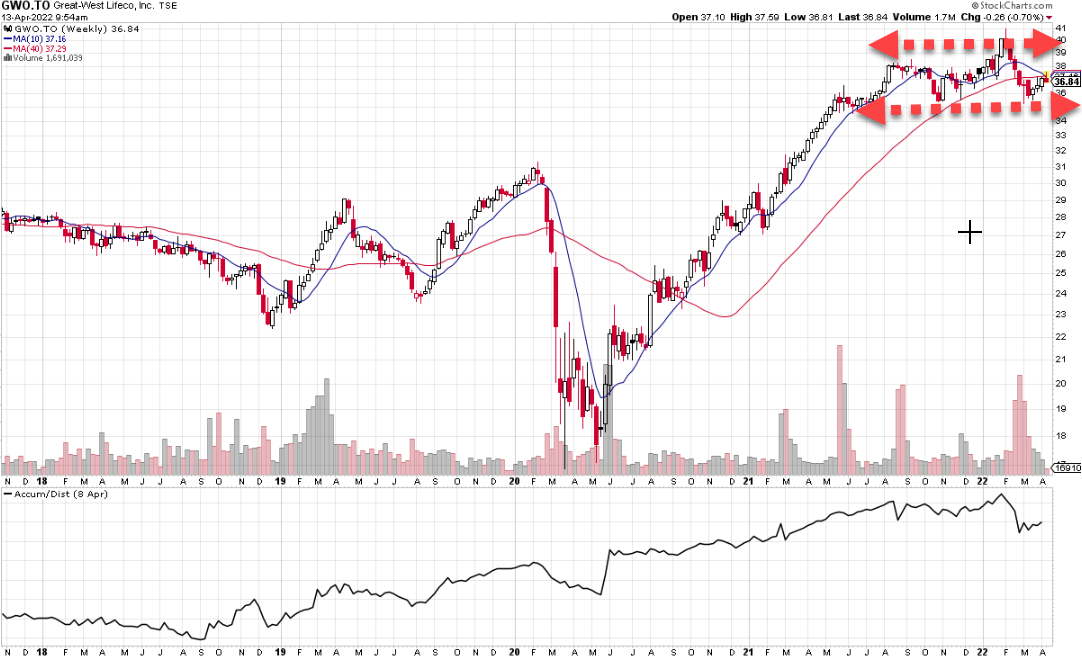 The seasonals for both Canadian and US banks suggest weaker performance from now until July. More importantly,  the charts on both sides of the border are far weaker for banks than the insurance charts. We recently sold one of our US banks, and we still hold one small position in another US bank. We also hold a position in the ZEB ETF as noted above. We are watching both for a potential exit very near-term. This is the beauty of following a trading system. You can take a loss and move on without emotion. From there, you can move into greener pastures without waiting too long in a hope and prayer trying to recover your loss. Its systematic, unemotional and logical.

Given the recently dangerous risk/reward profile that my Bear-o-meter read last week (April 7th), I am inclined to focus on the insurance sector as one way to play rising rates in a higher risk market environment.