Home / Back to basics

First things first: I was booked to be on BNN’s MarketCall show on Friday May 8th. Like all of the Technical Analysts who appear on that show, I will be skipping this one. Technical analysis requires their telestrator to draw lines on charts.  BNN can’t have guests in the studio right now. So they are limiting the show to at-home guests who can speak to fundamental analysis questions.

Next item: On Thursday May 7th, I’ve been asked by the MoneyShow to do a webinar on the technical approach to dealing in a bear market. I’ll provide you with details as I find them out – so you can join in. I’ll re-do that webinar near the middle of May. But, I’m sure that you’ll want to hear the first one instead of waiting.

OK, on with our regularly scheduled program.

Sometimes, we lose sight of the forest for the trees. So today, I thought I would go back to the basics of what I look at when first viewing a chart. True, I look at the ValueTrend Bear-o-meter at least once a month (and report on it on this blog). But that indicator isn’t a pure technical rating mechanism. It focuses as much on factors like market sentiment, breadth, and seasonality along with valuation metrics – as it does on trends. It rolls them all into a ball and spits out a general view of risk/reward.

Technically, there are some factors I look at on most charts.  For example, let’s use a weekly chart of the SPX and look at (in order of importance): 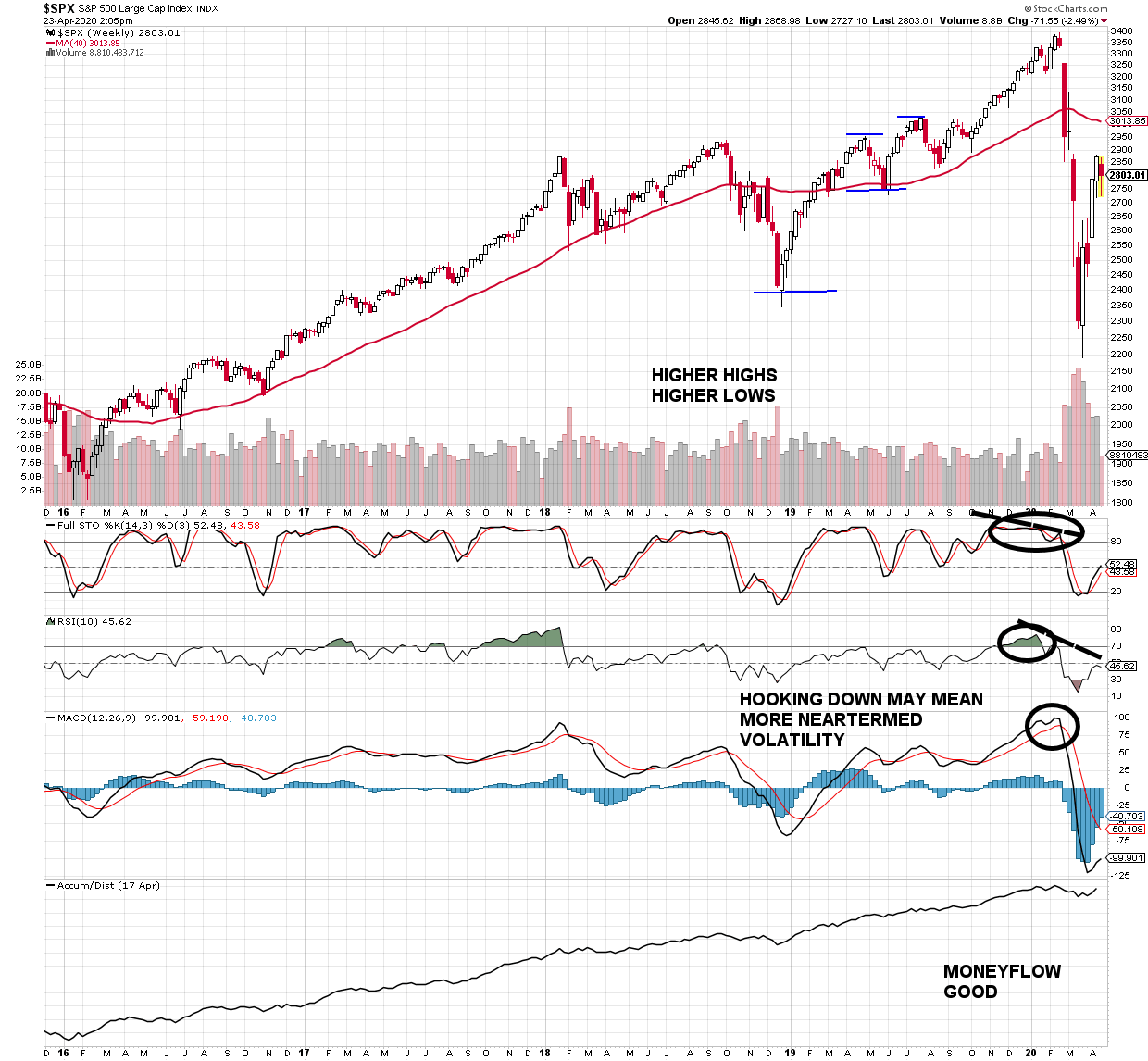 Here’s my analysis based on the above chart:

Trend: Note my prior indications of higher peaks and troughs. The recent selloff put in a lower low and very definitively broke the 200 day SMA. Trend indicates a bear market at this time.

Moneyflow: The A/D line (bottom pane) is still on trend. But its dipped in the near term. So its kind of undecided – lets call this neutral.

Volume: Note how volume rose in the selloff, then fell in the recent rally. This indicates that there were far more enthusiastic sellers than there were enthusiastic buyers. FOLM (fear of losing money) was a stronger motivator in the decline than FOMA (fear of missing out) has been on the rally.

Momentum: Like moneyflow, this is a neutral indication of market direction right now. On the neartermed bullish side, we have bullish hooks and crossovers on Stochastics and RSI. Both of these indicators diverged negatively before the crash. RSI is just coming up to the diverging trendline. Will it fail here? The MACD is hooking up but not crossing over its 9-bar MA (red line), so that might indicate a longer termed head-fake. I left my notes on this chart – you can see I was wondering if the bearish MACD cross earlier in the year might lead to volatility. I guess it did….

An investor also has to factor in the current economic environment. I’m not an economist. But it doesn’t take one to know if we are generally in a growth or recessionary phase of the economy. Where are we now? If you guessed “recession”, well, you don’t win a prize. The question was too easy.

In a perfect world, it’s usually best to own stocks until the growth cycle ends, and sell as the cycle ends.

You want to try and re-buy stocks before the bottom of the recession.  But not too early. That’s because markets will fall initially, but then rise ahead of an anticipated recovery.  Here’s a chart (courtesy Vanguard) of the economic cycle –it has a notation of where we might be that mirrors my guess…. 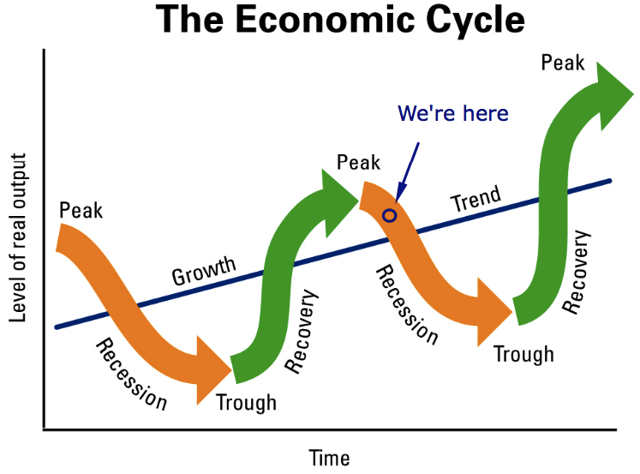 Some final thoughts backing the prognosis that its too early to start loading up on stocks:

Don’t fight the Fed is a a valid saying. That’s the entire reason the market staged its April rally. Still, I hold that it is too early to expect that the Fed alone can drive markets back to their February highs soon. In fact, I hold (now) 35% cash in our equity model given the potential for another selloff over the summer.

One factor that might pressure stock prices will be the disappearance of a major market buyer. Corporations are suspending their buyback programs – which were a major driver behind the rising stock prices in recent past. Buyback activity is down by more than 30% since mid-February. A further cut in share buyback activity could easily be up to 50% as corporate profits continue to evaporate. As Eric Parnell, (Assistant Professor of Business and Economics, Ursinus College Founder and Director, Gerring Capital Partners) recently noted:

“Put simply, the S&P 500 is increasingly losing its decade long marginal buyer of stocks with each passing trading day. This may ultimately prove too much for the S&P 500 to overcome before it is all said and done.”

That’s it for this week. I’ll post when I find out more about my bear-market webinar time and sign-in details.

Happy trading until next week!