Do you remember shopping at Kmart in the 1970’s or 1980’s? As you strolled through the store, suddenly an announcement would blaze on the rather obnoxiously loud speaker system: “Attention Kmart shoppers! We have a sale on men’s deodorant in isle 4 under the flashing blue light”. And sure enough, there was a little cart filled with deodorant (or whatever the special was) under a rotating blue light. It was an effective campaign, as I do recall seeing numerous people clamoring moth-like around said blue light (not to be confused with the beer) for the cheap deodorant sticks – acting in classic herding behavior.

Today,  Groupon and Wagjag follow an online formula that can be traced to Kmart’s original marketing brilliance. These sites offer time-limited online specials, sort of like a plethora of blue-light specials.

Retail has changed a lot since those days. Now, it’s not just one cart with some occasionally cheap deodorant that gets a consumer motivated to visit a store. Groupon and Wagjag nailed it by offering a site of nothing but “blue-light specials”. Big box stores like Costco, and big volume retail discount pricer’s like Walmart  dominate the scene today.

Meanwhile,  many specialty stores are dying a painfully slow death. Teen fashion retailers such as Aerepostal (ARO) and American Eagle Outfitters (AEO) are particularly struggling. The charts for these stocks are classic “Phase 3 downtrend” patterns.

The U.S. Commerce Department reported a .1% rise in April retail sales after March ‘s 1.5% rise. While this could be a sign of growing trouble for the sector, there is an argument that weather affected retail sales this year. Our long termed chart – above – of the iShares retail ETF shows us three things: 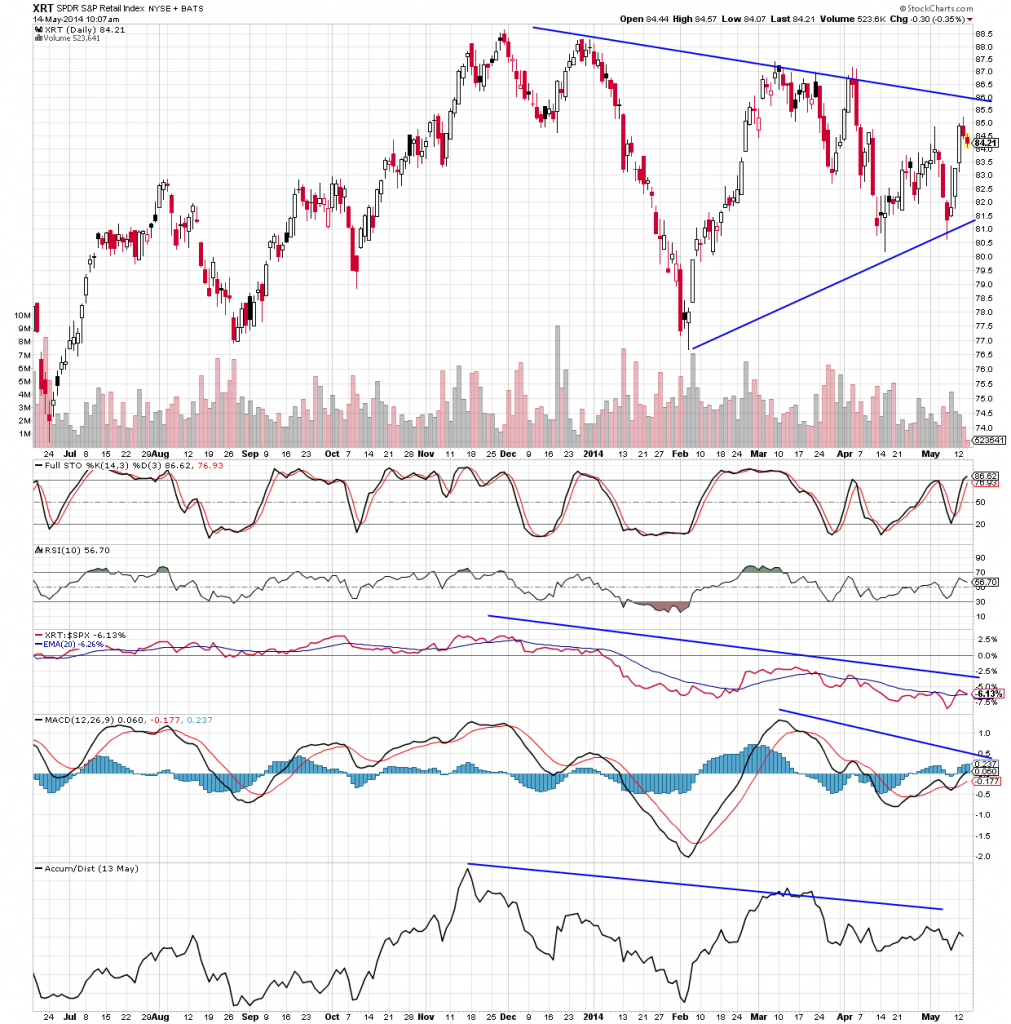 Our daily chart – above –  shows us a few other things to consider regarding this sector:

All in, the trend is still up, but there are growing danger signs for the retail sector on the daily chart. In my practice, I never buy a stock or sector exhibiting this type of  consolidation pattern until an upper breakout from the triangle occurs – AND on increasing money flow.

Similarly–short sellers should also avoid jumping the gun until the trend line and lower triangle band is broken.

I’ll be speaking this Thursday in Markham, Ontario on – what else – Technical Analysis. Admission is free, and I hear the Markham Library will be catering. What’s not to like about that?!!

If you are located anywhere near that area, I’d love to meet you personally. Come out and join the discussion! Here are the details;